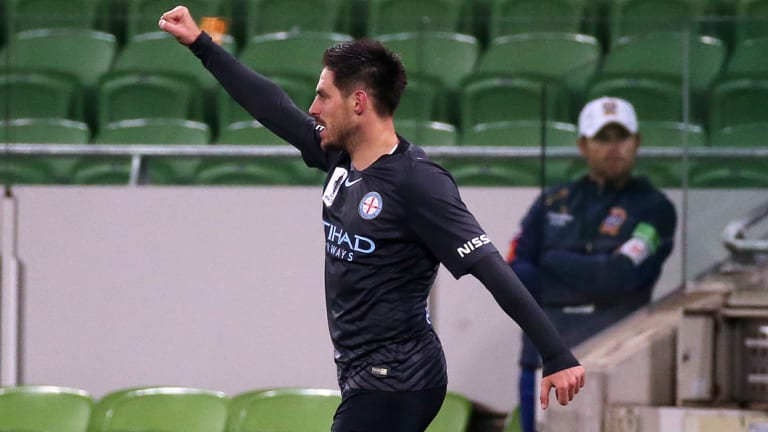 Melbourne City advanced to the last eight of the FFA Cup with a 1-0 win over last season's A-League runners up Newcastle Jets.

An excellent Bruno Fornaroli strike early in the second half was enough to give Warren Joyce's men the victory.

It was a memorable night for Victorian clubs as National Premier League champions Heidelberg United also eased their way into the Cup quarter-finals with a resounding 4-0 triumph away from home in Adelaide, where they defeated the Comets.

Victorian clubs will make up half of the quarter-final draw, with City and Heidelberg joining Avondale and Bentleigh in the final eight alongside Adelaide United, Sydney, West Sydney Wanderers and NSW state legue side Apia Leichardt, who stunned A-League champions Melbourne Victory.

City monopolised possession in the opening half of this game and created a number of chances but were denied by their own profligacy or by Jets goalkeeper Glen Moss, who thwarted them on several occasions.

Ironically it was Newcastle who had the first opportunity of the match, when Matthew Ridenton and Daniel Georgievski linked up well before finding Ronald Vargas, who fired over.

But that was pretty much it for the visitors as City, in an unfamiliar black third strip, asserted themselves.

City boss Warren Joyce also fielded several of the players who took the field against the Jets in last season's finals defeat as City looked to make amends against Ernie Merrick's men, who subsequently lost the grand final to Melbourne Victory in controversial circumstances.

Wales was played through in the ninth minute with just Moss to beat, but the goalkeeper made himself big and put him off.

Still, Wales recovered sufficiently to find McGree, whose cross was volleyed just over by Fornaroli.
A minute later Dario Vidosic, who looked lively from the kick off, shot just wide as City began to take control.

Fornaroli had a shout for a penalty for a handball in the area ignored by referee Jonathan Barreiro but the Uruguayan looked sharp and up for the challenge – hardly surprising given how much of the previous season he had missed following a serious injury sustained at the same stage of this tournament in 2017.

City's key striker almost broke the deadlock in the 25th minute when he linked well with Vidosic, taking the ball and then creating space before curling a left foot shot just over the bar.

Vidosic then went close himself with a surging run that carried him past opponents, allowing him to make space before unleashing a shot that Moss kept out with a diving save.

Moss was again the Jets hero shortly after, this time producing a reaction save to deny McGree from close range after the latter got on the end of a move involving Fornaroli and Wales.

The Jets began the second half in livelier fashion, City keeper Eugene Galekovic denying Ridenton in the opening minutes. The former Socceroo shot stopper then frustrated the Jets shortly after, this time saving Nicholas Cowburn's header from a Dimi Petratos cross.

But normal service was resumed shortly afterwards when City took the lead in the 54th minute and, fittingly enough, it was Fornaroli who made the breakthrough, capping an excllent move with an exquisite finish.

Wales, Vidosic, McGree and Vidosic again all combined with some slick passing before the latter found Fornaroli on the edge of the Jets penalty area. The South American dropped his shoulder and made space beautifuly by dummying past Cowburn before curling an angled shot up and over Moss.

It was no less than City deserved given their first half dominance, but they could not afford to rest on their laurels as Ridenton wriggled through at the other end only to see his effort blocked by Galekovic.

WHO PLAYS WHO IN THE QUARTER FINALS?