FIFA president Gianni Infantino is doubling down on his Club World Cup plans with a proposal for an annual tournament despite European football's resistance to any competition which challenges the supremacy of the Champions League. 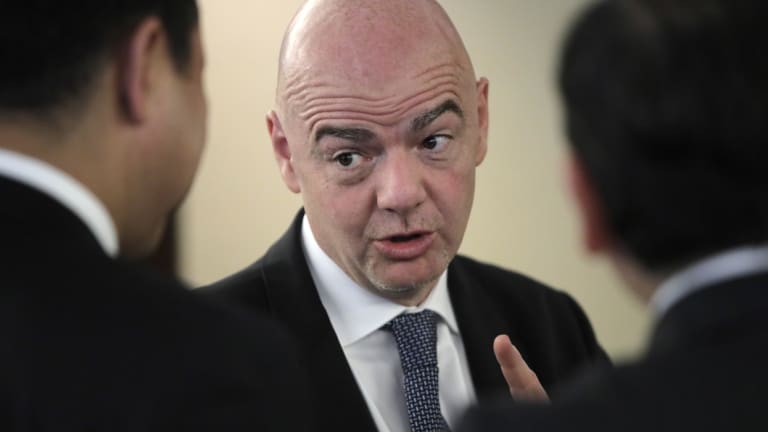 Changes: Gianni Infantino wants a July-August event, but he is open to another slot.Credit:AP

The new format will be discussed at the FIFA Council meeting in Rwanda on Friday.

UEFA has stymied Infantino's attempts since March to gain approval for the new FIFA competitions, which will have $US25 billion of income guaranteed by an international consortium including Japan's SoftBank.

The proposals, which include a global Nations League as a mini-World Cup every two years, were formed by FIFA to eliminate two little-regarded competitions: the current annual seven-team Club World Cup held in December and the Confederations Cup for international teams held every four years.

The proposal only covers men's football, there are no new competitions envisaged for women.

The original plan sent to FIFA Council members in April said a 24-team Club World Cup would be worth at least $US3 billion for each edition, played in June- July every fourth year from 2021 through 2033.

Half the slots would be taken by European clubs, ensuring the competition could weaken the status of the UEFA-run Champions League.

But discussions in recent months with global football leaders have encouraged FIFA to propose keeping the annual format but with more teams.

Infantino wants a July-August event, but he is open to another slot.

Playing in the northern hemisphere summer would pose a threat to the annual pre-season friendly tournament for Europe's leading clubs which is organised by Relevent Sports, a company owned by Miami Dolphins billionaire Stephen Ross.

While Infantino has convinced some teams to back his plans in public, including Real Madrid and Barcelona, the umbrella European Club Association has called for the workload on players to be reduced rather than increased.