It’s hard to remember when the finals destiny of an individual club was met with more scrutiny than the spotlight that’s currently shining bright on the Melbourne Football Club.

With 12 wins in the can and a strong percentage to draw upon, Melbourne effectively need to win only one of their final two games – against West Coast or Greater Western Sydney – to end their much-documented 12-year finals drought. But for coach Simon Goodwin, the mantra is the same as when the Demons bolted to a 7-3 record and post-season action seemed secure.

Outside noise is all fugazi. 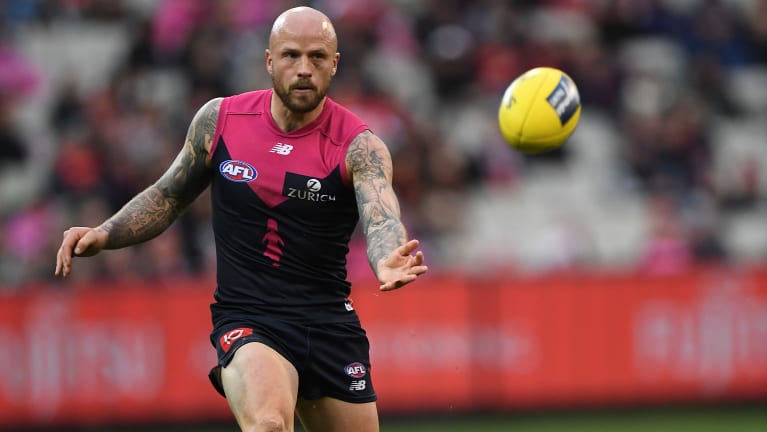 Melbourne co-captain Nathan Jones. Will the Demons make the finals?

Nearly three months ago drawing on the concept from the Hollywood blockbuster The Wolf of Wall Street was done to manage the hype around the playing group. On Thursday, the same notion was cited when the coach was asked about the club’s lamentable record this season (0-7) against other teams in the top eight.

"Fugazi. It's a whazy. It's a woozie…" Goodwin said in a light-hearted media conference moment at the start of June.

"There is a lot of noise out there and I think it is great for our supporters what they are starting to see but internally it's fugazi, which means it's noise.”

On Thursday, when reminded again about Melbourne’s inability to secure victories against teams higher on the ladder, Goodwin was happy again to block out the noise.

“Narratives in footy change all the time,” Goodwin said. “It’s something that’s in our game. It’s prevalent.

“That’s just complete fugazi for me.

“Seventeen out of 20 games [this year] we’ve been within a kick. That’s a strong position for this club to be in.

“What we now need to do is to start to maximise some of those moments, and that comes with maturing as a team.”

Melbourne have a golden chance to defy the odds and silence their knockers by pulling off an unexpected victory against the Eagles at Optus Stadium. They’ve been busy in recent years ending some of the hoodoos that have plagued the club. For example, last year’s narrow win on the road against West Coast (at Subiaco) ended a nine-match losing streak against one of their many tricky opponents.

Now, Goodwin is fully prepared to tap into the benefits of that victory.

“Of course you draw on that. You draw on the ability to actually travel interstate in a hostile environment against a really good team and perform,” he said.

The second-year Melbourne coach knows that winning interstate – winning anywhere for that matter – is no longer mission impossible.

“It’s been a strength of ours probably over the last two years,” he said.

While the loss of forward Jesse Hogan (navicular injury) will force Melbourne to recast their forward line, they have some luck on their side as Michael Hibberd and Jake Melksham are set to return after injury.

Young forward Sam Weideman will also get his chance now that Hogan’s season is over.

Noticeably, Goodwin was quick to reject any comparisons between Hogan’s season-ending navicular stress fracture and other foot complaints suffered by teammates this year.

Co-captain Jack Viney (bone stress in his toe) and Aaron vandenBerg (back playing after a stress fracture in his heel) are just two Demons to experience foot injuries.

“I think we really need to knock that one on the head,” Goodwin said.

“That was a specific incident with 'Hoges' (when he was injured) that had nothing to do with [training loads].

“That’s completely irrelevant to some of the other issues we might have had earlier in the year.