Ben Barba has been given a life ban by the NRL, with CEO Todd Greenberg declaring it’s time for him to find a new vocation.

Greenberg said on Monday Barba had been deregistered and he could see no way back for him after the NRL integrity unit viewed CCTV footage of a physical altercation with his partner Ainslie Currie at a Townsville casino. 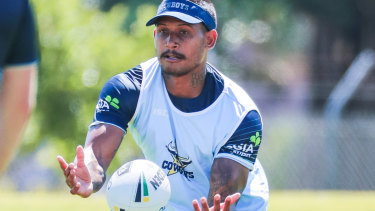 Deregistered: Ben Barba’s attempted return to the NRL is over.Credit:AAP

The 2012 Dally M winner and 2016 premiership winner Barba had already been sacked by North Queensland after the Australia Day weekend incident which is under police investigation.

‘‘His registration with the game is no longer and I can’t see a time, at any time, in the future that he’ll be welcomed back,’’ Greenberg said.

Greenberg did not speak to Barba but sent a message to Currie through a third party to offer support and counselling.

An emotional Greenberg, who knew Barba from his time as the Bulldogs CEO, said the 29-year-old needed to find a new career path after a spectacular but trouble-marred league career.

The English Super League and Australian Rugby Union have both indicated they won’t offer Barba a career lifeline, leaving European club rugby union as his only option if he wanted to continue playing football.

‘‘I’m not going to call for (a worldwide ban) but what I am going to say is that in the jurisdiction that I uphold, there’s no place for him,’’ Greenberg said. ‘‘It’s probably time for Ben to find a new vocation.’’

Barba won the 2012 Dally M and led Canterbury to the grand final before his career first spiralled out of control.

He was stood down by the Bulldogs to seek help for alcohol and gambling issues, amid rumours of a domestic violence incident. 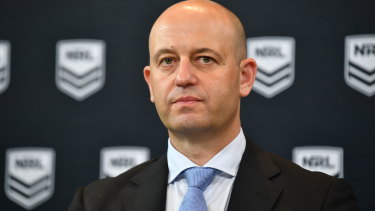 News Corp published photos of his partner with cuts and bruises to her face, however, she made no complaint to the NRL or the club.

After a stint at Brisbane, Barba played a leading part in Cronulla’s 2016 grand final win. He was suspended for 12 weeks when he recorded his second illicit drugs strike after the Sharks’ premiership celebrations.

He went to French club rugby then to Super League in England, where he rebuilt his career, winning the Man of Steel award, and was offered a one-year deal by the Cowboys. However, he was sacked without ever playing a game for the Townsville-based club.

‘‘These decisions affect people’s livelihoods, children, so they’re big moments and you want to make sure you get them right,’’ Greenberg said.

‘‘This is an enormous outcome because this is a guy that now loses his livelihood and career in the game. It’s a very clear message for a lot of players in our sport that it is a great privilege to play rugby league.’’