First their No.1 superstar walked out the door to chase his NFL dream. Now, Cronulla will be forced to sweat on the long-term future of their co-captain Wade Graham.

The back-rower is free to negotiate with rival clubs and does not plan on committing to the Sharks until the ongoing  salary-cap investigation is completed and he knows what coach Shane Flanagan will no beyond next season.

At 28, Graham's next deal stands to be the richest of his career. And Cronulla are likely to have some extra cash to splash around after Holmes walked away from his deal a year early and did not even entertain the new $4 million, five-year deal which could have kept him in the Shire until the end of 2024. 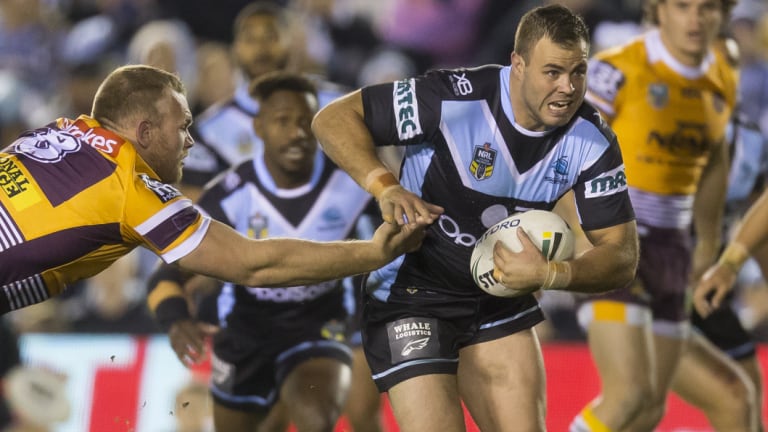 Most clubs would welcome Graham, one of the most experienced and powerful second-rowers in the game.

Graham, who will miss the first half of the season because of an ACL, said the club had a couple of other pressing issues to sort out before he discussed his own future. Whether Flanagan signs a new deal will go a long way to ensuring Graham stays put.

"There's a bit going on at the club, there's still the salary-cap investigation to finish up, and hopefully that can be resolved soon,'' Graham told Fairfax Media. "Secondly, 'Flanno' hasn't secured his future yet, and the coaching future beyond next year is up in the air.

"I'm on the sidelines for at least another seven months, so there's plenty of time for me to work hard in the gym and get my body right and get ready to play again and then sort out my future.

"I understand where the club is at, there's no need to rush it. We'll get through the other priorities first and then we can look after me.

"Stability is a massive thing in my opinion. If you look at the successful clubs like Melbourne, the Roosters and us over the last four or five years, it's because there's been stability in the football departments. Coaches have a plan, a development plan, and they look to the future. I'm definitely looking for stability around the club.''

Graham started out at Penrith before removed to the Shire and had plenty of time for the coach.  Like Graham, Flanagan is unlikely to thrash out his own deal any time soon with the club.

"I'm lucky to have been coached by Flanno the majority of my career and he's the reason I've turned into the player I have become,'' Graham said. "Of course I'm committed to the Sharks, they are the club I've come to play for and represent, and we've got great members and fans.''

Provided there are no setbacks, Graham is likely to be held back until after the first bye round and return against Parramatta in round 13. The ACL injury, which he suffered in the Sharks' semi-final win over Penrith, will once again rule him out of Origin contention.

Gallen approached Flanagan during the off-season and told him it was time to elevate Graham to the team captain. The fact Graham will miss so much of the season pumped the brakes on the promotion.

The captaincy is something that sits well with Graham, and he was more than keen to lighten the load for Gallen so he can enjoy his final year at the one club.

"Gal has had such a big influence on me throughout my career,'' he said. "For Gal it's set in stone now this is his last season.

"If the opportunity is there for me to free him up from some of his responsibilities so he can sit back and enjoy his footy and last season for Cronulla, which he thoroughly deserves, I'll more and happily take on that role.''