Manly’s season has descended further into crisis with five players facing heavy fines for partying at a Gladstone strip club on the same night captain Daly Cherry-Evans had a scuffle with teammate Jackson Hastings.

Following a week-long investigation, coach Trent Barrett, co-owner Scott Penn and chief executive Lyall Gorman decided on Monday the players would receive breach notices for ignoring the instruction from Barrett to not head out after a team dinner and a few quiet drinks following the round-four loss. Instead, some players attended an establishment called The Boardroom. 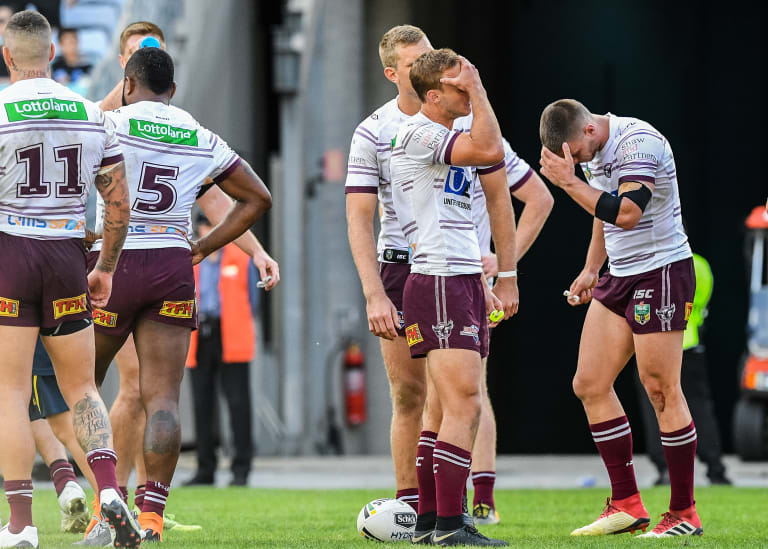 Club in crisis: More Manly players are facing fines for incidents after their round four loss.

Cherry-Evans has already been fined $10,000 for his part in the night of revelry, which ended in a fight in a hotel room with Hastings, who has since been framed as an outcast and banished to NSW Cup side Blacktown Workers.

“The instructions were pretty clear that it wasn’t a night out for our players but five players chose to ignore that,” Gorman told Fairfax Media.

“We have respect for our values and culture and this behaviour is not acceptable in any form. We will learn lessons from this and move forward.”

Gorman denied that each player would be fined as much as much as $10,000.

“We’ve issued breach notices – we haven’t determined any penalties,” he said. “It’s a normal process in rugby league to follow. They have a right to respond to it if they wish.”

The development is yet a further distraction for Barrett’s side after its 44-10 loss to Parramatta at ANZ Stadium on Sunday.

An angry Barrett denied after the match there is a split within his team, insisting that Hastings remains on the outer with teammates – despite some of them publicly backing him last week.

The Sea Eagles play the Newcastle Knights at Brookvale Oval on Friday night. They could not find a better time to snap a three-game losing streak.

Manly's stretched NRL squad has become even thinner, with young winger Brad Parker ruled out for up to six weeks due to a knee injury.

Scans confirmed on Monday that Parker suffered a torn meniscus in his left knee when he got up to play the ball after a tackle in Sunday's flogging at the hands of Parramatta.

The club confirmed he would miss between four and six weeks, adding to a horror April in which they've fallen from fifth to 13th on the ladder and also suffered off-field woes.

Tuesday shapes as another tough day for the Sea Eagles with Trent Barrett set to make a call on the make up of his side given Jorge Taufua is also still injured.

Matthew Wright will likely be called from the bench and onto the wing, leaving the door open for a utility to be selected on the interchange bench.

Barrett refused to buy into talk on Sunday about whether exiled utility Jackson Hastings would be recalled to the side, given he could fit the role.

Veteran Lewis Brown has also filled a similar position on Manly's bench in the past, while Jonathan Wright has played one game this year on the wing.

"He's done his knee playing the ball so it's pretty indicative of our day," he said.

"We are under the pump. We're in a hole. The only way out of it is to stick together and fight our way out of it."