MARBELLA, Spain — It was just after lunchtime on Tuesday, and Christian Pulisic was facing a rare free afternoon. There was a nap in his plans, for sure, and maybe dinner at a local restaurant afterward.

Pulisic was in this southern Spanish town, bracketed by mountains and the Mediterranean Sea, for a weeklong training camp with his German club, Borussia Dortmund. The sun was shining. Waves skimmed across the beach. Any leisure time was to be cherished.

“This is always fun,” he said about German soccer’s annual winter break, when most teams pack their bags and go in search of a week of warm-weather training abroad. “It’s a week to get away, get some sun, just to change things up a little bit.”

It was also, he acknowledged with a laugh, most likely the last time for a while that he would enjoy this particular type of holiday rest.

Last week, Pulisic announced that he would leave Dortmund — the only professional club he has known — at the end of the season to join Chelsea of the English Premier League. They have winter breaks in Germany; in England, they do not.

It is one of the countless changes, some small and many big, that the 20-year-old Pulisic will encounter in his planned move to the supercharged world of English soccer. It is a situation he says he relishes, a personal milestone in a young career already full of them.

“This was a big dream of mine,” Pulisic said of playing in England, “and I feel this was the right time to make this step.”

Pulisic announced his move himself on social media with an open letter to Borussia Dortmund fans. In it, he declared, with a “heavy heart,” that he would move to London after finishing the remainder of the season in Germany. He referred to Dortmund as “(y)our world-famous club,” the parentheses at once reflecting the deep ties he formed with the team, which signed him at age 16 and is the only professional club he has known, and his looming exit.

Pulisic, who was born in Hershey, Pa., said he took great care to get the wording of the letter right, working with a team staff member to make sure a German translation posted at the same time captured the message’s nuances — and made clear his deep gratitude to the club and its fans.

“The five years I’ve been at Dortmund have been unbelievable, and I don’t want them to think that I took any of that for granted,” Pulisic said. “It’s not going to be easy for me to leave. I’ll miss it here.”

In the United States, where Pulisic’s career moves are sometimes viewed through the prism of what they mean for the American national team, news of the transfer generated a splash befitting the country’s best player. The fee Chelsea paid for Pulisic, 64 million euros (about $73 million), was the highest ever paid for an American player, more than tripling the previous mark.

Pulisic acknowledged the enormousness of the figure, and the expectations that come with it, but he brushed aside the notion that it might burden him.

“In the soccer world, especially now with these numbers you have, who really knows who’s worth what?” Pulisic said. “It is what it is. They wanted me obviously enough to pay that much, but I’m just excited to go there and give my best.” 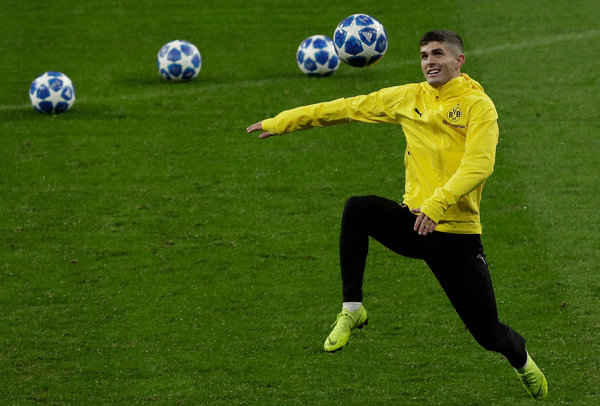 As transfers go, the deal was a congenial one. Borussia Dortmund had approached Pulisic last summer about extending his contract, which had two years remaining. But Pulisic signaled that he was hoping to move on.

Michael Zorc, the team’s technical director, was disappointed. But he also knew such a day would come: Pulisic had never been shy about his ambition to play in England.

So Dortmund and Pulisic quickly set about moving forward with parallel goals: the club hoping to maximize the value of an attractive young asset still under its control, the player trying to make sure his dream move landed him in the right place.

“There was a lot of trust in these talks,” said Zorc, who said multiple clubs expressed interest in Pulisic and that at least one other Premier League team was willing to pay Dortmund’s final asking price.

His transfer will bring an end to three remarkable years at Dortmund. As a 17-year-old, he broke into the club’s first team and promptly became the youngest non-German to score a Bundesliga goal. But his rise slowed somewhat this season as injuries and the emergence of other young players diminished Pulisic’s playing time. Zorc said he suspected the transfer negotiations had distracted Pulisic this season — “maybe his mind was not so clear” — but hopes the resolution will have a positive effect on the field. Pulisic agrees.

“I feel much, much clearer in my head now that all this is passed,” he said about making the deal public.

Pulisic has five more months to contribute at Dortmund, which leads the Bundesliga with 42 points — 6 ahead of Bayern Munich — through 17 games. After that, he will continue his development at Chelsea, a club not particularly known for nurturing young players.

Still, it was not lost on Pulisic — or his father, Mark, who worked closely with him to evaluate his transfer destination — that Chelsea’s roster situation, with several forwards potentially moving on this summer, could work in his favor.

“Of course that was part of the equation: You look at what a team is going to look like over the next few years,” Mark Pulisic said. “Chelsea will be having some turnover due to the ages of players. But, at the end of the day, that doesn’t matter. When you’re at the highest level of your sport, there’s going to be new competition coming in constantly.”

Mark Pulisic also said the recent narrative that his son’s acquisition by Chelsea had been completed without the knowledge of the club’s Italian coach, Maurizio Sarri — an impression fueled by a television interview in which Sarri implied he had been left in the dark about the move — was “far from the truth.”

“We obviously met with Sarri for quite a long time,” Mark Pulisic said. “We had a chat with him. Christian got to meet with him for a bit, and it just felt good.”

The resulting move will represent a return of sorts for Pulisic, who spent a year with his family in Tackley, England, when he was 7 years old.

His memories from that year are few, but vivid: winning a few tournaments with the youth team he joined, going to professional games with his father, wearing his soccer uniform all day at school, playing on a concrete soccer court afterward for hours.

And he noted one more, rather obvious, benefit to the move: “I’m excited to go be able to speak my first language on a day-to-day basis,” he said, laughing. “Something as simple as that, you don’t notice it, but it’s nice at times.”