BUENOS AIRES — Nobody was in a rush inside the Estadio Monumental, not anymore. The game that had never happened had become the game that never started. The final to end all finals was the final without end. The stands were empty, the field pristine. Everything was calm, quiet. They had all the time in the world.

Slowly, laconically, technicians wandered around Sunday afternoon, dismantling the stage they had constructed. They rolled up vast tentacles of wiring and piled up the electronic advertising boards. They took apart Fox Sports’s pitch-side studio, and they vented the meter-high gas canisters stationed behind the goal.

But they dawdled a little as they worked, too: some basking in the sunshine, some kneeling to kiss the turf, some taking photos — digital proof that they were present for an event that never actually took place.

And then, roughly 24 hours after the biggest game in South American history had been scheduled to start, long after the fans had left and the viewers had switched off, they removed the star of the show.

Two men lifted the Copa Libertadores, a great gaudy tower of silver, from its plinth, and carried it along the edge of the field, stopping only to pose for a few more pictures. Then the trophy slipped from view, disappearing underneath the stadium stands. It was taken by taxi to a “more secure” location, a tournament official said. Nobody is quite sure when it will be seen again. 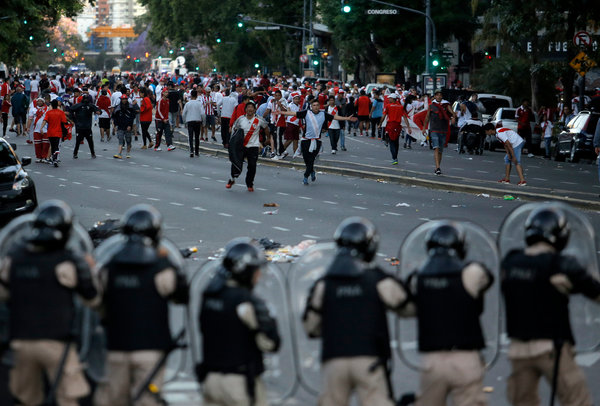 This was not, needless to say, how it was supposed to end: with the final postponed not once, but twice; with the Boca Juniors bus attacked by River Plate fans and the visiting players in no condition to play either on Saturday or Sunday; with a meeting scheduled for Tuesday to decide when — or if, really — the game will go ahead; and with reports circulating that Boca already had been discussing possible legal challenges if the resolution is not to its liking.

It was supposed to be a red-letter day for Argentina, for all of South American soccer — the culmination of the first meeting of River Plate and Boca Juniors, Buenos Aires’s sibling rivals, in the final of the continent’s most important club competition.

Before the first leg, Mauricio Macri, the Argentine president, had declared the final a chance to show that the country had “changed,” that it had grown up, that it was capable of staging an event of this magnitude, that it could “play in peace.”

Two weeks later, in a meeting room in the Hotel Alvear Icon in the affluent Puerto Madero neighborhood the morning before the first attempt at the second leg, Alejandro Dominguez, the president of Conmebol — South American soccer’s governing body — explained confidently how this would prove an opportunity for his organization and the continent it represents, too.

River vs. Boca might have been the end of a 58-year wait for South America’s biggest game to take place on its biggest stage, but it also would mark the start of something, Dominguez said: a new era in the Copa Libertadores, one in which it might not be able to match the glamour of the Champions League, its European sister, but could at least provide an appealing counterweight.

Already, the Copa Libertadores is being modernized: The final has been shifted to November from May, so that the time difference to Europe is not so extreme, and it is being played on the weekend, rather than on weeknights. Rules designed to prevent two teams from the same country from meeting in the final have been abolished, opening the door for a Superclásico showdown like River vs. Boca.

And starting next year, the two-legged format for the final will be abolished in favor of a Champions League-style, one-off final, held at a neutral site. The first edition is slated for Santiago, Chile. Conmebol, rather than the two host clubs, will be in charge of the logistics, and through that authority it would be able to guarantee not only the presence of both sets of fans at the final, but also their security, and thus produce a grand spectacle — “a world-class event,” Dominguez boasted.

A more appealing Copa Libertadores would not just benefit Conmebol, he said, but all of South American soccer. It has already been able to improve its broadcast deals, promised $1.4 billion over four years by its new partner, FC Diez.

To Dominguez, the destination is what matters. He is not naïve; he does not believe South American soccer can ever catch and overtake Europe, mostly because he does not think improved television income for the Copa Libertadores can balance out the massive economic advantages enjoyed on the other side of the Atlantic.

But he does hope that by harnessing what makes the Libertadores so special, so different — the color, the spirit, the frenzy — South America could start to stanch the endless flow of its best players to Europe, to end the decades of decline the game has seen here.

There is an allure, he said Friday, to how South America “lives its soccer.” He has previously compared the Champions League to “PlayStation soccer”: precise and perfectly executed, but somehow shallow, two-dimensional. “I see my kids playing it and they have fun, they tease each other, but it is football on TV,” he said. “It is not the way we live it here. The way the fans support their teams, the passion they bring: It is life.”

That spectacle is what attracts viewers, and that is what brings in money: more money for the clubs, which means they can pay their players a little better, improve their facilities a little quicker, persuade their stars to stay just a little longer before moving to England, to Italy, to Spain.

“It is not that we can shorten the gap to Europe,” Dominguez said. “But at least we can keep track of it. We can prevent it from getting bigger.”

It is an admirable plan, a fine vision. River against Boca was supposed to illustrate how it would work, what South America could offer that Europe had lost. And then, as Boca’s bus rounded the corner at the end of Avenida Monroe on Saturday and a flurry of projectiles smashed its windows and pepper spray drifted along its aisle, the vision fell apart. Argentina’s new dawn and South American soccer’s fresh start were both lost in the chaos, scattered with the shards of glass.

That is because, ultimately, the latter cannot induce the former. The challenge facing Dominguez is one of organization, strategy and financing; there is a part of it that can be turned into a neat presentation, drawn up on spreadsheets. There is a part of it, however, that cannot.

“I have written a Master’s thesis and I am finishing a Ph.D. on how to solve the problems in Argentine football and even I find it difficult to define,” said Diego Murzi, a member of Salvemos al Futbol, an advocacy group dedicated to modernizing Argentine soccer.

“It is a combination of factors: the climate of suspicion that pervades our game; the policies of prevention and control of violence that have always failed; and the culture around our football, which is violent, macho, forgetful and thinks only of success.”

It is that last element that comes up most frequently when speaking with those inside Argentine soccer: an awareness that here, ultimately, winning means too much. It infects the game at every level. It means managers are given no time to build teams, getting fired after a bad week of results. It means youth systems are anarchic, with little thought of how to develop players. It means clubs are constantly in disarray, lurching from one perceived crisis to another. It means fans exist on a coiled spring, conditioned by a hyperbolic discourse both within their teams and their news media to see the slightest setback as a disaster.

It means defeat is unthinkable, a fate to be avoided at all costs. For players, that might mean a little casual brutality toward an opponent or some deliberate theatricality. In a country where many see their soccer team as the principle source of their identity, where far too many feel they have little else to live for, and where the economy is struggling and inflation rampant, it can have much more serious consequences for fans.

For some, it creates an environment where any measures in support of their team, or to the detriment of a rival, can be considered. That may be why River fans targeted the Boca Juniors bus: because this was a game they could not lose.

When defeat does come — and defeat always comes — it is met with rage that defies control. Salvemos al Futbol keeps a running total of all the soccer-related deaths in Argentina. To date, it has counted more than 300, a grim total that includes both players and fans.

It is an example worth considering across the globe, in an era where sport — and soccer in particular — is afforded an ever-greater significance and discussed in increasingly breathless, histrionic terms, where all defeats are crises and all failures humiliation. Argentina is an example of what can happen when it goes too far.

Dominguez seemed sincere when he said, in the calm before the storm, that next year’s final would be “wonderful.” He appears to feel, genuinely, that a more lucrative, better organized Copa Libertadores can start to change things.

But Argentine soccer — though its problems are not unique — cannot be changed in a boardroom, on a spreadsheet. It has to be changed on the streets. That is where the damage is done, where the problems lie, where the final to end all finals became the final without end.