This weekend, Charles Leclerc, 21, will enter the history books as the first Monegasque Formula One driver to represent Ferrari at his home grand prix. Record or no record, for Leclerc, who used to catch the school bus on the road that becomes part of the track, the Monaco Grand Prix on Sunday will be the culmination of a dream.

While the principality of Monte Carlo — “a sunny place for shady people,” in the words of W. Somerset Maugham — is intrinsically linked with motor racing, Monaco has produced very few racing drivers.

William Grover-Williams, winner of the first Monaco Grand Prix in 1929, was an expatriate resident of the principality, as are many of the drivers on the current Formula One grid. Louis Chiron was the first Monegasque winner of the race, in 1931, and became the oldest driver to enter the Monaco Grand Prix in 1958, when he was 55. Only one other local has entered the race in the years since: Olivier Beretta in 1994. André Testut made an attempt in the late 1950s, but failed to qualify.

Leclerc, born and raised in Monaco, has completed laps of the world’s most famous street circuit in a stroller and on a bicycle.

Throughout Leclerc’s childhood, the weeks of preparations for the race became part of the scenery, although the race itself stood out.

“I don’t remember exactly when it was, but it was as early as I can remember, so I was probably 2 or 3 years old,” he said. “It’s one of those types of images that you keep from the very beginning. I remember I was playing with small cars on the terrace of a friend’s apartment in the exit of the first corner.

It was around this time that Leclerc discovered go-karts.

“I didn’t want to go to school that day, like any child,” he said. “But yes, I made believe to my dad that I was ill, which I was not, I was feeling very well. And by complete coincidence, he was going to see his best friend, Philippe Bianchi, who had a karting track at the time in Brignoles.” He is the father of the Formula One driver Jules Bianchi, a friend of Leclerc’s, who died in 2015 after a crash.

“When I went there, he basically realized that I was not ill and there were some kids driving in go-karts and I asked to have a go in it. But I was only 3½, so obviously it was quite tricky, and we put a rope on my kart attached to the kart in front. After half a lap, we took off that rope because they saw that I was managing well the situation, and on the way back, I told my father that’s what I wanted to do while older.”

By 2005, Leclerc had won his first karting championship, the first of three wins in France’s PACA Championship. By 2012 he was racing for the factory-backed ART Grand Prix team in the WSK Euro Series.

Even in the early days, Leclerc was a talent to watch. Alexander Albon, who drives for the Scuderia Toro Rosso Formula One team, has raced against Leclerc since they competed in go-karts. 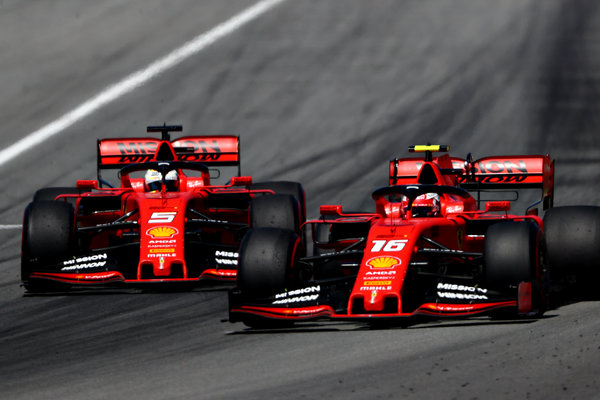 “In terms of driving, he’s very talented,” Albon said of his rival. “His braking, just his ability to be on the limit through a whole corner. He doesn’t have a weakness, say in low-speed, medium-speed, high-speed. If you were quicker than him it would only be by two-, three-, four-hundredths; you’d never get more than that. He could feel the grip very quickly — mixed conditions, or when it was raining. He has a very good feel for the grip level.”

Nicolas Todt, Leclerc’s manager, said he stood out even in the early days of his career.

“He has always done extremely, extremely well,” Todt said. “His last year in karting, we decided to put him in KZ, the karts with gears. Usually this championship is only entered by very experienced drivers, and I thought it would be a good way for him to prepare for single-seaters. Alongside him at the time — he was 15 or 16 — were racing some drivers who had a lot of experience and were between 18 and 30 years old. He did a fantastic job, and that’s how I started to be really impressed by him.”

In 2017, Leclerc dominated the FIA Formula Two Championship, winning seven times and setting four fastest laps on his way to the drivers’ title.

“He’s good,” René Rosin of Prema Racing, who was Leclerc’s team boss that year, said in an interview at the time. “He’s really motivated, he’s really focused on what he’s doing, he’s somebody that when he points out a target he tries to achieve that target whatever is necessary.

“He’s just incredible,” Rosin said. “In testing we knew his potential, we knew what he was capable of doing, but here and there were some small mistakes. The first moment when the time counted, he didn’t do any mistakes, through all the season he’s always trying to push more, dealing with engineers, trying to always improve, because he knows he cannot sit down based on his own results. And he’s always improving.”

The team principal Frédéric Vasseur of Alfa Romeo Racing, which is the rebranded Sauber team, oversaw Leclerc’s debut season in Formula One in 2018. They had previously worked together in GP3, when Leclerc won the drivers’ title with ART Grand Prix, a team founded by Vasseur and Todt.

“When Charles joined us we were at the back of the grid, so Charles’s approach was a completely different one,” Vasseur said. “It was much easier to start with Sauber, I think. He struggled a little bit on the first appearance, with so little testing. But step by step, the pace was quite fast, and he improved a lot in his management skills; not only tire management and fuel management, but in managing how he monitored all the information on the steering wheel and so on, because this is a huge step compared to the other series.”

“I met Charles through Jules, who I was managing at the time,” Todt said. “Jules’s best friend was Charles’s older brother, and Jules told me that Charles was doing a good job in karting — at the time he was 12 or 13 — and he was doing well, but the family had no more resources to carry on in karting. Out of friendship, I met Charles and his dad.

“He was already doing well in karting, and I didn’t want him to stop at such a young age. I said: ‘I will give you a chance. I will fund your season in karting next year, and if you do extremely well I will keep on helping you.’ And that’s how the story started.”

At Ferrari, Leclerc is expected to help the team fight for the constructors’ championship. Ferrari has a global fan base, but the team is subject to media scrutiny in its home country, Italy, where the fortunes of the team can affect the national mood.

Despite the pressure, once he is alone in the car Leclerc finds his own version of peace.

“The moment I prefer is the moment I put on the helmet, that everyone is leaving the pit lane, that I’m alone with the car and there it feels good,” he said. “You don’t have any feelings anymore; it’s just racing and this I enjoy.”