For Opponents of Native American Nicknames, 2020 Has Brought Hope

The New York Times Sports department is revisiting the subjects of some compelling articles from the last year or so. Here is our July report on schools’ considering dropping Native American nicknames and mascots.

About 1,900 public schools in the United States still use Native American nicknames or mascots for their sports teams, but the number has been dwindling, especially in the months since the N.F.L. team in Washington heeded pressure from sponsors and shelved a logo and nickname that had long been derided as offensive to Indigenous people.

Over all, 29 schools from New Mexico to New York have abandoned Native mascots since Aug. 1, according to a database compiled by the National Congress of American Indians.

In the second week of December alone, schools in Farmington, Conn., Caledonia, N.Y., and Fresno, Calif., all dropped Native American nicknames or mascots.

Then on Dec. 14, the Major League Baseball team in Cleveland announced plans to stop calling itself the Indians, raising hopes that the sports landscape can be rid of imagery and language that many Native Americans consider demeaning.

“Each time one of the dominoes falls, and it’s a big team, it has a reverberating, ripple effect for the public schools and other teams,” said Aaron Payment, the vice president of the National Congress of American Indians, which consulted with the baseball team on its move to abandon its name. “The Cleveland decision was momentous. It creates a level of awareness that suggests this is not an aberration.”

Native American groups have protested the use of Indigenous nicknames and mascots for decades, but the movement gained new allies — and earned victories that were long thought impossible — amid nationwide protests against racial injustice that began in late May after the death of George Floyd in police custody in Minneapolis. 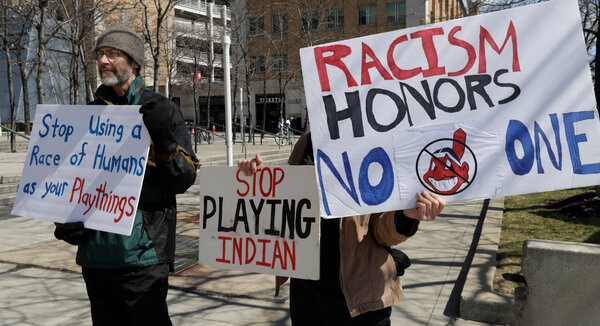 As many athletes became involved in the Black Lives Matter movement, joining protests in cities across the country and calling attention to injustices by staging walkouts that briefly shut down their sports, the conversation expanded to include concerns about the ways some of their teams offended Native Americans through the use of team names, mascots and rituals.

“You can’t support these athletes protesting racism without looking at this racial slur on one of their teams,” said Maulian Dana, an ambassador at large for the Penobscot nation in Maine, who has been active in efforts to eliminate Native team names and mascots.

Of the 29 schools that abandoned Native names since the beginning of August, 11 were known as “Indians,” according to the N.C.A.I.’s database, and three were called “Redskins,” which is widely considered the most offensive nickname associated with Indigenous people. The database shows just under 800 schools that use the nickname “Indians” and 95 known as the “Redskins.”

When the Washington N.F.L. franchise, the most prominent team with that nickname, finally gave it up on July 13, the decision exposed school districts that still employed it to further scrutiny.

One of those was the Union Public School district in Tulsa, Okla. Last month, the district’s school board voted unanimously get rid of the Redskins name after 70 years. Kirt Hartzler, the superintendent of the district, and a former football coach at the high school, said that a similar motion had been unanimously voted down in 2003. But this time, he sensed a new climate of diplomacy on both sides of the issue.

“There is a season for everything, and this was the right season for this change to occur,” Hartzler said in a recent telephone interview. “Not only because of the internal forces at play, but also the external forces, what had occurred nationally. We needed to come out on the right side of this issue, and I believe we did.”

The roughly 1,900 schools (in 1,025 districts) holding out, according to the N.C.A.I’s database, include Neshaminy High School in Bucks County, Pa., which has continued to use the nickname Redskins, despite protests. The suburban Philadelphia district says it spent an estimated $435,000 on litigation to retain the name ahead of a 2019 ruling by the Pennsylvania Human Relations Commission that allowed schools to continue using Native names and imagery if they met certain requirements.

“The Neshaminy School District and the Community are extremely proud and supportive in displaying our heritage; some 85 years of respectful pride, continuing a connection to those that established the Neshaminy area and surrounding lands before us,” Stephen Pirritano, the president of the Neshaminy district school board, said in an email, “We believe in ‘education not eradication’ especially in areas of culture.”

There are at least 10 states considering legislation to prevent or limit public schools’ use of Native-themed or race-based mascots, following a precedent set in 2019 by Maine, which prohibits “a public school from having or adopting a name, symbol or image that depicts or refers to a Native American tribe, individual, custom or tradition and that is used as a mascot, nickname, logo, letterhead or team name of the school.”

The day the Cleveland baseball team made its announcement, a legislative body in Nebraska met to discuss a ban in its state, and a similar bill is working its way through committee in the Massachusetts State Senate. Joanne Comerford, the Senate sponsor of the Massachusetts bill, said the summer’s unrest had provided momentum, not only to change school mascots, but to change the state seal, which depicts a Native American standing beneath an arm and sword, and to address other items on the so-called Indigenous agenda.

Massachusetts still has about two dozen schools with Native nicknames, but two have changed since October. Athol High School abandoned the name “Red Raider,” and Pentucket Regional High School near the New Hampshire border gave up the name “Sachem,” a title for Native leaders.

Comerford, who is not of Native descent, said the use of such mascots was damaging to all citizens, and she expressed confidence that Massachusetts would follow Maine’s example.

Dana, the Penobscot ambassador, said the remaining major professional teams that use Native mascots or names — the Atlanta Braves, the Kansas City Chiefs and the Chicago Blackhawks, all of whom have said they have no plans to change their identities — must follow Cleveland’s example.

“We are entering a time where all of these will be seen like minstrel shows,” she said, “like horrible, outdated racist things, and people will be very confused as to why they lasted so long.”