When this year’s Ryder Cup winners reunite for the first time at the final tour stop in Dubai this week, it will be as if the victory party never ended.

For many of the golfers, it will be the first time together since Europe posted its sixth straight Ryder Cup win at home by defeating the United States in September at Le Golf National in Paris, where the players showed they got along famously as a team.

Tommy Fleetwood pounced on the back of Ian Poulter after the win. Later during the news conference, Fleetwood blew kisses to Francesco Molinari, and the European Tour is now promoting their bromance.

The team spirit is sure to continue this week as 10 of the 12 men from Team Europe, including Molinari, Fleetwood, Poulter, Henrik Stenson, Alex Noren and Tyrrell Hatton, begin play in the DP World Tour Championship, Dubai, in the United Arab Emirates. But they are competitors once again and must find their way back to that mind-set.

“We are all professionals and will be back to business this week,” said Henrik Stenson, who played for Europe at the Ryder Cup. “It’s not that hard to switch back into competitor mode because we are constantly competing with each other. Trash talking is always happening, and I am sure there will be a little of that per the usual this week.”

Molinari is at the top of the Race to Dubai standings and is expected to win, more than a million points ahead of Fleetwood, who is in second place.

“My partnership with Tommy was very special in Paris, and it is amazing that we both head into Dubai with a chance to win the Race to Dubai,” Molinari said. “I think after every Ryder Cup we all become even better friends, and we get to know some of the younger guys better. That is definitely one of the keys to the European team’s success in the Ryder Cup that we are year-round friends. 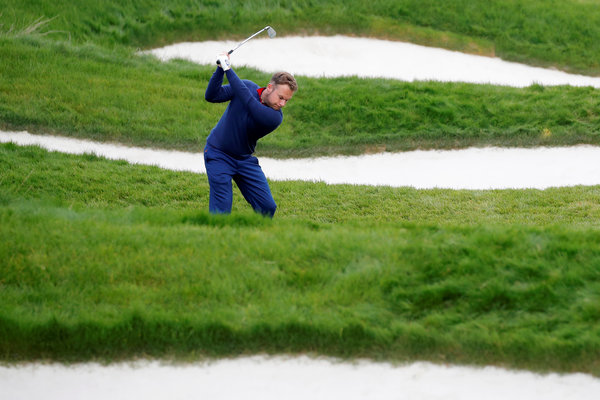 “Of course, it is a different experience from a team event, and we will playing as individuals in a stroke play tournament, and it is the season finale. But our friendships off course stay the same, and it will be very nice to see everybody and share the memories of that special week.”

Balancing his friendship with competition after the Ryder Cup hasn’t been a challenge.

“It is no different to how it has been in the past after Ryder Cups,” Molinari said. “Friendships are deeper, and the time on tour afterwards is all the more enjoyable for being able to travel with so many good friends. It doesn’t change anything on the course, except perhaps we all have extra respect for each other that we shared such a special experience together.”

Noren called the Ryder Cup win “an amazing experience in every aspect.”

“It was tough and fun at the same time,” he added, “and we had a great team spirit, which made the win possible. It will be great to be back with the guys in Dubai.”

For Hatton, everything is the same.

“We will remain friends, but still battle against each other on the golf course,” he said. “It was obviously a great experience the Ryder Cup but, as they say, it’s back to reality. Golf is an individual sport most of the time, so it’s back to the day job, back to business.”

Dubai is also the end of a long and exhausting tour season.

“It’s been a long year as usual,” Stenson said, “and it will be nice to spend some time at home with the family, so I will be looking forward to that. I was able to get a procedure done on my elbow a couple weeks back and have been recovering from that. It’s not 100 percent yet, but it feels much better than before.”

Molinari said that the Ryder Cup win helped sustain him for the rest of the season.

“An amazing week like we had in Paris gives everyone extra confidence,” he said. “To be able to perform so well under that type of pressure is a really good feeling to take with you.

“Mind you, I honestly was exhausted after the week, so that takes a bit to recover from after a busy summer. I feel good now, though, and I’m ready for this week.

“I am tired but very proud of my year. I don’t think I have taken it all in really as I have been so busy. I am looking forward to playing this week and then having time at home with my family in London and also with my family in Italy to really rest and reflect of everything that has happened this year.”