For Texas Tech Fans, N.C.A.A. Men’s Final Is Already in the Past

LUBBOCK, Tex. — Although Texas Tech’s dazzling quest for a national championship in men’s basketball came to an end in Minneapolis on Monday night, fans who had shared the unlikely ride were already looking to the future.

“We’re going to get it done by the time I graduate,” said Christopher Rodriguez, an 18-year-old freshman from Houston, as he and more than 5,500 other fans spilled out of United Supermarkets Arena in Lubbock, Tex., where they had gathered to watch the game.

They endured an emotional roller coaster, as the Red Raiders repeatedly seemed within reach of their first N.C.A.A. title before eventually falling to the Virginia Cavaliers, 85-77, in overtime. 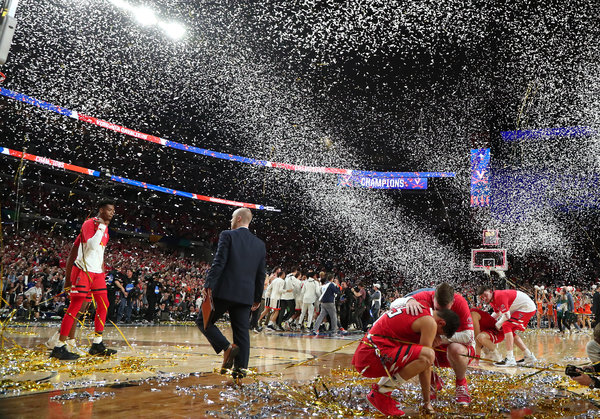 The Lubbock police had beefed up their presence around campus and closed off major streets, fearing a repeat of the rowdy behavior that followed Texas Tech’s semifinal victory over Michigan State on Saturday. That night, people tipped over cars, set fire to a couch and committed other acts that Police Chief Gregory Stevens has said will result in charges of arson, criminal mischief and rioting.

But the streets were quieter on Monday, whether because of the expanded police presence or simply because defeat had left Raider Nation subdued.

Despite the loss, fans took pride in a season that had taken their team to the pinnacle of college basketball. More people made the trip to Minneapolis for the final than watched the game from the arena in Lubbock.

“I’ve been waiting since 1961, and I would have hitchhiked if I had to,” Kent Hance, a Texas Tech graduate and former chancellor, said by telephone from Minneapolis a few hours before the game.

Officials in Lubbock, the metropolitan center of an agrarian region in northwestern Texas, were happy about the national exposure.

“If you mention Lubbock, there’s a better chance of them recognizing where Lubbock is and what we stand for as a result of the success of the team,” said John Osborne, president and chief executive of the city’s Economic Development Alliance.

Mayor Dan Pope, a Texas Tech alumnus (like his parents), said the city’s economic team had determined that 5,540 articles were published about Lubbock and the university around the tournament, which they said was worth $44 million in advertising. “It’s had a huge impact,” he said.

After the game, Chris Cook, the university’s communications director, tried to put the loss in perspective, noting that of 68 teams in the tournament, Texas Tech was one of the last two standing.

“A lot of people would have liked to be in our shoes,” he said.