CARLSBAD, Calif. — Two years ago, the Yankees were clamoring for starting pitching, and Chris Sale — a young, elite pitcher on a team-friendly contract with the Chicago White Sox — was on the market.

But Yankees General Manager Brian Cashman, despite holding a trove of promising but untested prospects to deal, balked at the asking price, explaining at the time that the Yankees were not yet in back-up-the-truck mode.

“Thank God I didn’t do that, actually, because you’d be missing some serious components of our major-league club right now,” Cashman said on Tuesday, revealing that he would have had to trade pitcher Luis Severino and another All-Star caliber player — Gary Sanchez? Aaron Judge? — in a package for Sale.

He continued: “We wouldn’t have gotten anywhere if I did anything like that with the White Sox back then.”

Now, however, all the ingredients are there for the Yankees to back up their armored car, loaded with prospects or cash, to address that same need for starting pitching. The Yankees were conservative enough to duck under the luxury threshold last season, freeing them from onerous penalties, and they reached an American League division series before watching the Boston Red Sox celebrate another World Series title.

But as his team’s winter plans begin to unfold, Cashman appears to be holding on to that newfound Yankee trait: restraint. Bryce Harper and Manny Machado — the jewels of this free-agent class — seem destined to land elsewhere, barring the type of precipitous drop in asking price that saw Giancarlo Stanton fall into Cashman’s lap last December.

The Yankees’ first moves this off-season won’t be met with much more than a shrug in Boston, Houston or Cleveland: They brought back pitcher C. C. Sabathia, who agreed in principle to a one-year, $8 million contract on Tuesday, and outfielder Brett Gardner, who last week agreed to a contract that will net him $9.5 million. (Sabathia’s agreement, first reported by the New York Post, was confirmed by two people familiar with the deal who were not authorized to speak because it had not been finalized.)

Sabathia is 38, Gardner is 35, and both are clubhouse leaders. But there is a reason both accepted modest pay cuts to return: Gardner slumped badly enough that the Yankees felt compelled to acquire Andrew McCutchen to replace him in late August, and Sabathia failed — for the second year in a row — to last more than three and one-third innings in a playoff loss that eliminated the Yankees. 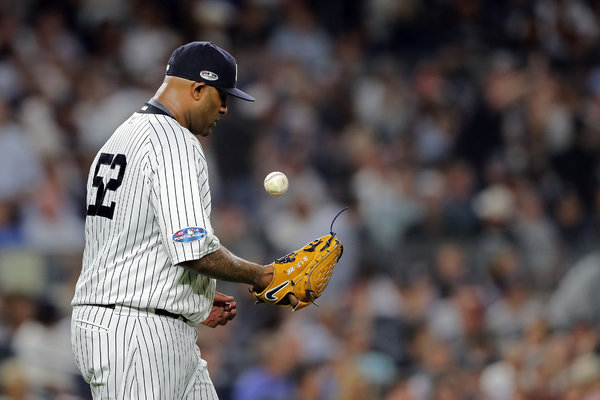 Next up on Cashman’s to-do list is pursuing two more free-agent pitchers, with left-handers J.A. Happ and Patrick Corbin on the list. Then, find a shortstop to replace Didi Gregorius, who will miss most of the season after undergoing Tommy John surgery, or a second baseman to step in for Gleyber Torres if the Yankees move him to shortstop, instead. And, finally, fortifying the bullpen, which has lost — at least for now — David Robertson and Zach Britton to free agency.

Cashman said he has a budget, which he declined to disclose, but he allowed that the Yankees could exceed the luxury tax threshold, which will rise from $197 million to $206 million for next season. “Is it a definite line in the sand?” Cashman said. “I wouldn’t say that’s the case. I’d say it’s a preference.”

In his search for reinforcements, Cashman might be tempted to look across town.

The Mets, of course, have two of the best starting pitchers in baseball in Jacob deGrom and Noah Syndergaard and a new general manager in Brodie Van Wagenen.

But Cashman, who was frustrated when he could not acquire outfielder Jay Bruce or infielder Neil Walker when the Mets were unloading veterans in 2017, said he understands there is a different dynamic trading with certain teams. He doubts, for example, that the Yankees owner Hal Steinbrenner would have signed off on trading either of his coveted relievers, Aroldis Chapman or Andrew Miller, to Boston in 2016.

“I’m open minded to do anything with anybody,” Cashman said. “I’m not saying my ownership would feel the same way about that.”

He added: “I’ll check with Brodie here, see what they’re up to, see if it matches. I doubt if you’ll be seeing us match up, regardless, because of the history and what I’ve experienced in the past. If I was a new G.M. and hadn’t been here for 22 years and know the terrain, maybe I’d be optimistic. But I wouldn’t be optimistic.”

There are plenty of other teams looking for pitching, including the Astros, who announced on Tuesday that Lance McCullers Jr. will miss next season after having Tommy John surgery.

But there are also plenty of places to look. Cleveland is willing to listen to offers for two of its front-line pitchers, Corey Kluber and Carlos Carrasco. And Seattle, which won 89 games last year but missed the playoffs for the 17th consecutive season, is open to dealing James Paxton — and anyone else on its roster.

That is not a problem for Cashman, who seems intent on chasing the Red Sox the same way he has built the Yankees into a championship contender, with sound, incremental moves — and not with a splash.