In a blur of aggression a schoolboy hurls himself at the try line and shoves the ball through a desperate defence.

On a giant screen above him, Wallabies playmaker Bernard Foley strikes a penalty between the posts to put Australia ahead against Ireland.

Cheering them on are hundreds of Western Force fans who’ll soon watch their side take on the Melbourne Rebels. 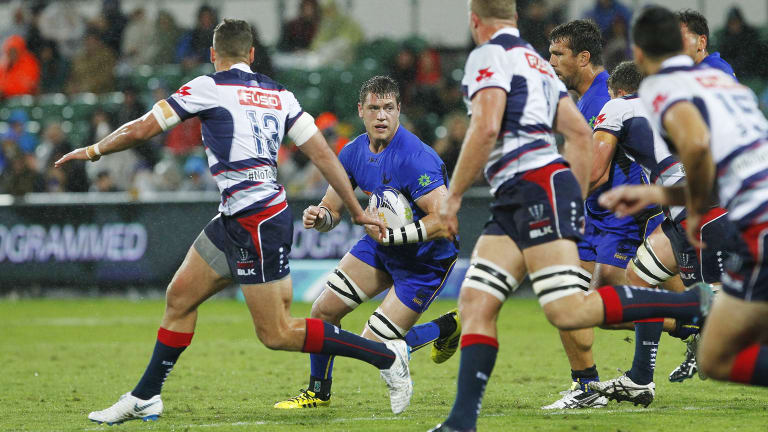 The Western Force are playing in the World Series rugby competition bankrolled by Andrew Forrest.

These layers of rugby at Perth’s nib Stadium on a rainy Saturday night are all elements of a sporting rebellion known as World Series rugby, bankrolled by WA mining magnate and philanthropist Andrew Forrest to save the Force and keep the sport alive in WA.

Chatting in the privacy of his family’s corporate box, he narrows his eyes and leans close, gregariously proud of the extra chances he has granted the state's players and fans.

"I was not a great rugby tragic, I was just a supporter of rugby," he said.

"But when I saw kids weeping on television and kids weeping at games that they'd lost the side they hoped to play for, I though 'oh I've got to step in here'."

And as rain falls white as snow in the floodlights, a stark battlefield becomes apparent. Three games in, World Series rugby is more than a sporting rebellion for the man most call "Twiggy".

It's becoming a reckoning.

Everything to play for

In 2017 the Western Force was axed from Super Rugby after enduring months of tense speculation and legal battles as Rugby Australia decided between keeping them or the Rebels.

Fans held rallies and protest marches. RugbyWA went into administration. And scores of WA-based players headed east to continue their careers. It followed the usual narrative of a failed team – but the axe fell despite an extraordinary offer by Forrest to stump up $50 million to save them.

And this is where it gets complicated. 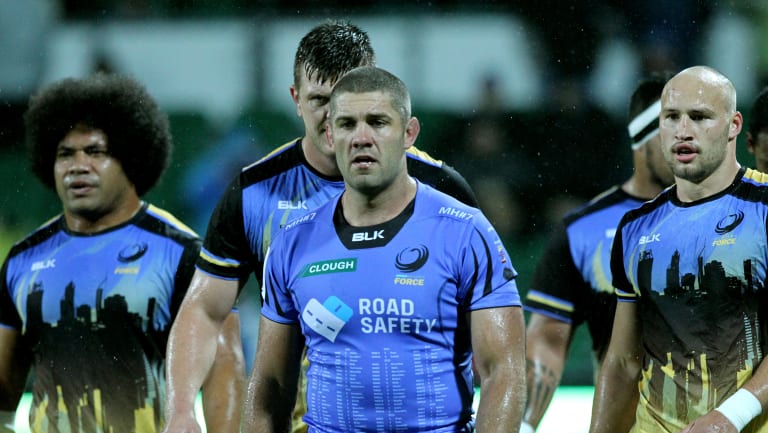 A Senate inquiry into the future of Rugby Union in Australia was told Rugby Australia's rejection of Forrest's philanthropy was a backflip that came weeks after it told him such a figure would save the club.

The revelations were made by the mining magnate's friend, former rugby professional and businessman John Welborn, who told the inquiry: "I think they were shocked when Andrew turned up willing to make … the largest philanthropic sporting donation of all time."

In the lead up to the Force's axing, Forrest slammed the ARU’s process as a "charade", accusing them of bullying and insisting his offer of $50 million to save the Force was not too late.

Going it alone, Forrest bankrolled the Force anyway and set up World Series Rugby, an independent competition with seven matches, pulling in international teams and old rivals from Super Rugby.

While he helped lay those foundations, the Senate inquiry handed down a 54-page report, which suggested amongst its recommendations that ASIC review RA's public financial figures and its transactions with the Rebels.

Then in April, citing confidential documents it had obtained, Seven West Media reported that money from Rugby Australia helped clear debts for the Melbourne Rebels, allowing its owners to sell the club to the Victorian Rugby Union for $1 under a Put Option agreement, effectively saving them.

This came on the back of a series of media reports citing leaked emails revealing that two months before the decision to ditch the Force was announced, RA was making a deal to preserve the Rebels.

Now nearly halfway through his breakaway rugby competition, Forrest is on the offence again, saying the new revelations about Rugby Australia's handling of the Force's demise need to be looked at by Australia's Senate again.

He's worth $6 billion, but in person 'Twiggy" looks and acts like any other proud father taking his kids to the footy: blue jeans, blue sweater, tan boots and a pint of beer. 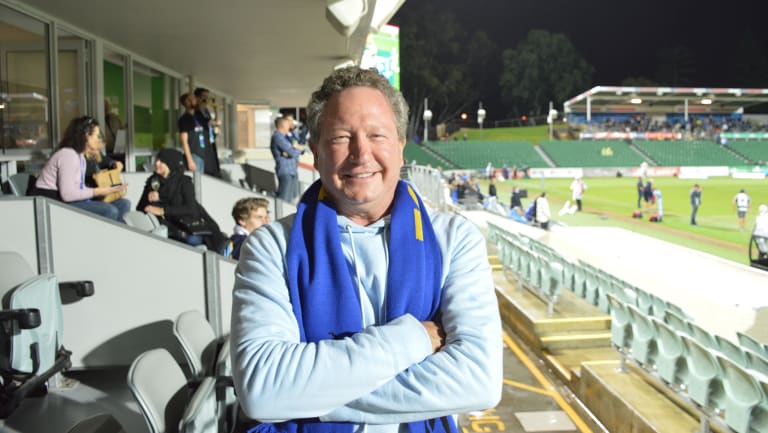 Forrest got his nickname at school where he was a skinny kid picked on by bullies. But with a backbone honed on his parent's Minderoo Station in the Pilbara, he stood up and learned two lessons – bullies back down, and you can sometimes make them your mates.

"I think there needs to be a reopening of that [Senate] inquiry – they were major allegations, which Rugby Australia has been silent on," he said.

"They have been silent, and I ask why?

"Now that a respectable media organisation has illuminated that what I was told by the very chairman of Rugby Australia – have illuminated in that media's view was allegedly false – the Senate needs to get to the bottom of that.

"I was assured by the chairman of Rugby Australia that he knew nothing about the switch between [Andrew] Cox [Former Rebels owner] and the VRU, that it surprised him, it took him off guard, but now that it was done, it couldn't unwind it.

"If those articles are true then senior members of Rugby Australia allegedly knew about the switch and the Senate should get to the bottom of it.” 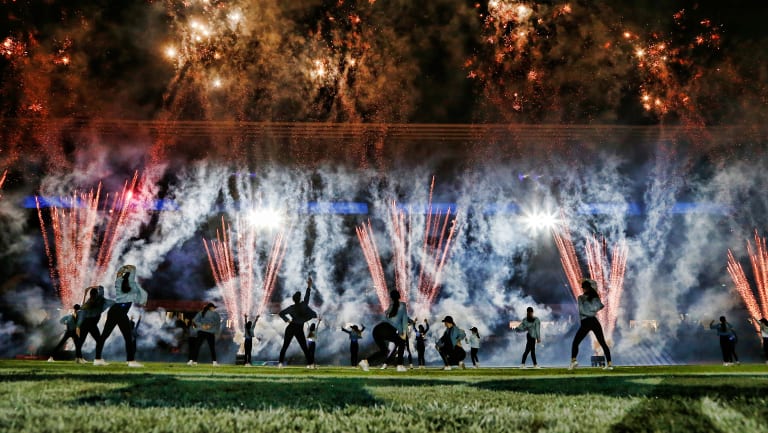 Dancers, fireworks and music brought the crowd into the game.

Bankrolling rugby is, for Forrest, another way of righting a wrong in the world that's in line with the Giving Pledge he and wife Nicola made to donate half of their fortune to charitable causes.

And while many have said backing the Force is a lost cause, Forrest said he remains willing to work with RA to resolve the situation.

For the present moment though, he's got games to watch. And so do his critics – it's vital World Series rugby puts on a good show, otherwise it could be dismissed as a stunt.

Even with rain lashing the stadium on a wintry Saturday night, 13,907 men, women and children turned out – most of them in Western Force colours – to watch a rugby match where the off-field scenes often had more in common with an American basketball game.

Dancers, flag bearers and a fireworks show brought the teams onto the pitch, kids battered the railings with clappers and cameras zoomed on a fan shouting 'Twiggy, Twiggy, Twiggy, oi, oi, oi".

Rugby Union has never been so colourful or so fun in WA — or so political. At full-time, Forrest went onto the pitch and addressed the crowd, telling them they were part of a push for a fair go.

"Out of every setback comes the seed for success," he said, voice ringing clear across the PA.

"If you love Western Australia, you love the Western Force."

There was no love lost though as a Rebels side with scores of former Force players on the roster beat the home team 28-12 in an often spiteful game.

It was all hugs and handshakes afterward with Rebels coach Dave Wessels – himself the former Force coach – saying it had been a "good scrap".

"I was saying to Tim [Sampson, Force coach] right after the match that you've got the start of something special here," he said.

"The Force boys are playing for each other."

There is a backs-against-the-wall feeling coursing around Perth's nib Stadium, a defiance that goes beyond buying a ticket to support the team. The average punter in blue and yellow feels cheated and disrespected by their sport's leaders, and it seems they cheer for the Force and each other as a community under siege. 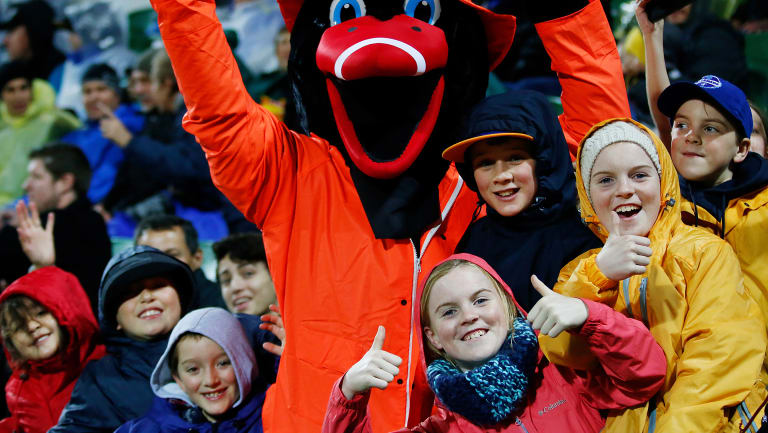 Fans at the ground were entertained by more than just the game.

The Force's next game is against the Crusaders, a powerhouse New Zealand side that is the most successful Super Rugby team in the history of the competition with eight titles.

For a Force side cobbled together from spare parts and with just three matches together, it'll be a formidable task to beat let alone stay in touch with them. But captain Ian Prior doesn't hesitate.

"What a wicked opportunity to come up against a champion franchise in the Crusaders, obviously we've got a few things we can work on, but it's an unbelievable opportunity," he said.

And with four games to go in the rebel competition, whatever the future holds for the Western Force and World Series Rugby, Andrew Forrest stands on principle.