A former pairs partner of John Coughlin said in a Facebook post Sunday evening that the late figure skater “sexually abused” her for two years.

Replying to a post in support of Coughlin, who committed suicide Jan. 18, Bridget Namiotka wrote, “I’m sorry but john (sic) hurt at least 10 people including me. He sexually abused me for 2 years. Nobody innocent hangs themself (sic).” 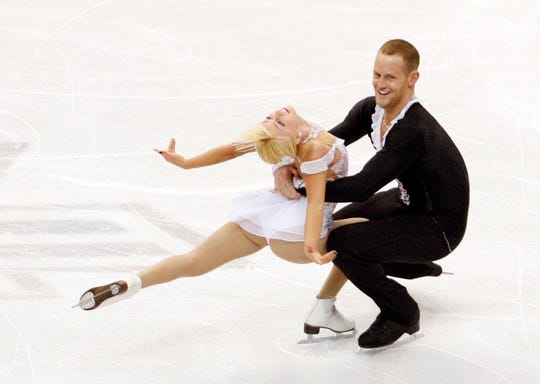 “Someone that’s innocent doesn’t hang himself. Think about the victims when you’re speaking up for what he did to at least 10 girls.”

“Think about all of the girls he hurt."

"Grooming happens. It happened to me and he hurt a lot of girls. Think about the victims.”

CULTURE OF ABUSE: SafeSport discovers figure skating culture of 'grooming and abuse' that has gone 'unchecked for too long'

Attorney John Manly, who represents more than 200 victims in the Larry Nassar gymnastics sexual abuse case, said Monday evening he represents Namiotka and her family and confirmed that the Facebook posts “definitely” were written by Namiotka. Manly said in a March 29 interview with USA TODAY Sports that he also represents two other women who were minors when Coughlin allegedly sexually abused them.

Tara Modlin, who was Coughlin’s agent, sent a text message Monday evening in response to a request for comment:

“It seems that you want me to comment on an unstable persons (sic) Facebook comment – I don’t really understand your question. … my suggestion is to call some of his other partners …”

In the March interview, Manly said, “My clients and I want to make this clear: John Coughlin used his position of trust and power and prominence in figure skating to sexually abuse multiple minors, three of whom I represent.”

Coughlin, a two-time U.S. pairs champion with two other partners, hanged himself in his father’s Kansas City home one day after he received an interim suspension from the U.S. Center for SafeSport. USA TODAY Sports, citing a person with knowledge of the situation, reported in January that there were three reports of sexual misconduct against Coughlin. His death effectively ended the investigation into those reports, SafeSport announced in February.

In a Jan. 7 email to USA TODAY Sports, Coughlin called the allegations against him “unfounded.”

“While I wish I could speak freely about the unfounded allegations levied against me, the SafeSport rules prevent me from doing so since the case remains pending,” he wrote. “I note only that the SafeSport notice of allegation itself stated that an allegation in no way constitutes a finding by SafeSport or that there is any merit to the allegation."

Coughlin’s assertion that he was being prevented from speaking freely about the allegations against him by SafeSport “is not true,” SafeSport spokesman Dan Hill said in March.

“The SafeSport Code and the interim measure process that was communicated to him directly, and which is on our website, makes it clear that he could provide information, evidence, speak for himself and even ask for a hearing that would have been accommodated in 72 hours by rule,” Hill said. “That hearing would have been in front of an independent arbitrator. That’s such a critical part of all of this.”