Adonal Foyle was the eighth overall pick in the 1997 NBA Draft and his number one message to up-and-coming players is simple.

"Don't be one-dimensional, spread yourself out, not thin, but be curious about the world and keep your options open. Basketball is not the one thing you will do for the rest of your life." 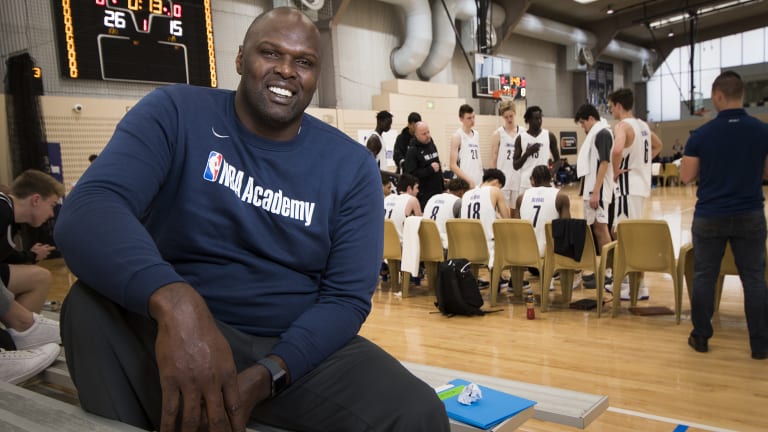 Former NBA player Adonal Foyle at the AIS this week.

Foyle spent 14 seasons in the NBA and is now the director of life skills at the NBA Academy – which has programs in Canberra, China, India, Mexico and Senegal.

Those academies converged on the ACT this week to play against Basketball Australia squads. Foyle was on hand to teach players about the skills they'll need off the court.

"I try to do is give these kids the complete 360 approach to basketball, which is the life part, there are so many intangibles in basketball that we don’t talk about," Foyle said.

"We want to make sure when they leave our program that they have more than just a basketball acumen. That they have the mental skills necessary to go with it.

"They must understand the importance of education, we want to make sure they’re more rounded and understand there is a lot more to life than basketball, as fun as it is and as involved as they are."

Foyle has written children's books and is a political activist who was voted into the World Sports Humanitarian Hall of Fame in 2009.

"I preach balance, there is a duality to sports and academia, academics at the end of the day is going to give you different sets of tools to really travel your life journey," Foyle said.

"It's about finding that space to read a book, learn a language, find a hobby. That becomes a very critical part of your development.

"We’re looking to fill the gap that we see has emerged over the years and for players to get this message at this young age is great because it becomes a part of who you are and the learning process."

The NBA Global Academy is based out of the AIS, which Foyle praised as a world-leader in sports science and research.

"This is my second time here and it’s remarkable because a lot of what we do is partly due to them, they’ve done the research in many instances," Foyle said.

"We’re looking closely at their model as a way to expand our game and they've been remarkably generous with their time and resources. The facility is incredible."