Jack de Belin is the school choirboy who only went to his first State of Origin match to sing but plans to make a whole heap of different noise as NSW's newest hitman.

The kid consistently snubbed for under-age representative sides only watched his first Origin match after performing on the field as part of the St Gregory's College choir before the 2008 series. 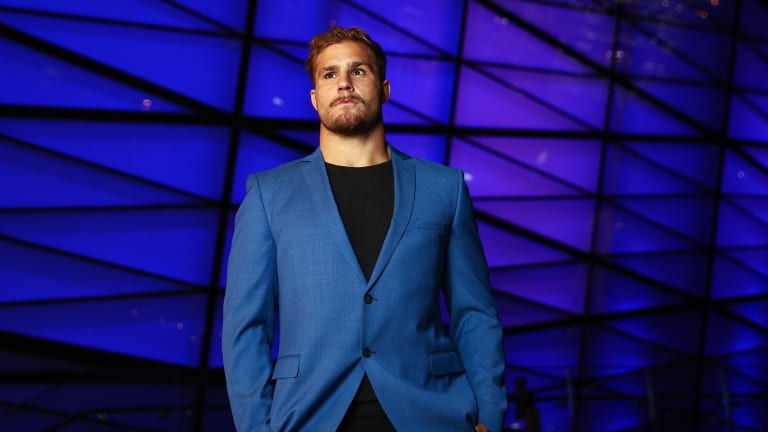 Performer: Jack de Belin is intent on making a mark in Origin I.

Some of his closes mates and school friends featured for the NSW under-16s side before de Belin warmed up the vocal cords at ANZ Stadium.

It's far cry from where he is now, with his punishing defence making him an almost automatic selection for Brad Fittler's side this year. He is one of 11 debutants chosen for the series opener at the MCG next week.

Asked about the first time he attended Origin, de Belin said: "Yeah, I do remember my first one. There is a story behind it.

"It was with St Greg's at Campbelltown when I was a boarder there and I sung in the choir. We sung the national anthem and You Raise Me Up. I was in it. I don't [have a good voice]. You had to audition to do it. I went in there with a couple of mates and you just had to sing."

It was a memorable occasion for more than one reason. A Danny Buderus-led Blues were lifted by two tries from unheralded Newcastle winger Anthony Quinn to win the opening match of the series 18-10. Buderus is now acting as Fittler's assistant coach.

The Maroons would later charge back to take the series in a decider back in Sydney.

Ten years later de Belin is set to step onto the Origin stage as a player rather than choir boy.

He will do it alongside Dragons teammates Tyson Frizell and Paul Vaughan and opposite St George Illawarra's ace No.7 Ben Hunt, who will lead Queensland around the park.

"If I get the chance [I will line him up] but he's pretty smart and I don't think he'll run straight at me," de Belin joked. "He's been outstanding for us. He's a talented halfback and he brings a lot to the side, not just with his kicking game but he's a strong runner of the ball."