Joe Daniher plays his 100th game next week. After 99 games it remains uncertain how good a player he is or might become.

The games Daniher has played in the nineties have been poor. His game on Sunday against Melbourne was another low point. He was invisible. 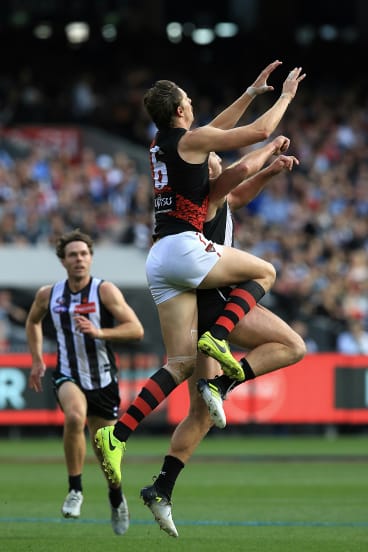 Backing up: Joe Daniher and his Essendon teammates need to regain consistency

Daniher looks hesitant and unsure of himself and his teammates seem to feel the same about him with how they approach giving him the ball. They are choosing other options when Daniher is presenting as a more obvious choice.

Like Daniher, Essendon as a team seems to have all the tools but also presently no ideas about how to use them.

The ball movement to the forwards is haphazard at best. The last kick into the forward line, when it makes it that far, is awful. Daniher can be forgiven for lacking influence when the delivery to him is so poor.

On Anzac Day and again on Sunday he was getting to the right position but he was being fed by shallow kicks and not the long ball hit to his advantage to let him have an impact.

When he is getting the ball he is utterly predictable to the opposition. He doesn’t think, he just wheels around in a big arc and bombs the ball long and deep. It is seldom effective.

That poor decision making is replicated through his team. The choice of kick by the midfield has been poor from the Bombers. On Sunday there was more urgency about moving it when on the narrower, faster Etihad Stadium than it was on Anzac Day but that is saying little. On Anzac Day they played unthreatening circle work at half back. On Sunday they tried to get overlap run going but their poor disposal left them vulnerable to goals the other way when they invariably turned it over.

Devon Smith and Adam Saad were notable for their keenness to take the game on with run and Darcy Parish used the ball more cleverly. Zach Merrett finished up Essendon’s top possession getter, and while he was not as damaging as he has been when at his best, he was at least still able to find the ball despite a tag from Nathan Jones. Jones, incidentally, remained one of Melbourne’s best.

Essendon have played like a side with heavy legs for weeks – and not just off a four-day break – they looked sluggish for run and movement.

The question is why? Why do they look slow, why do they lack impact? Why does this team that boasts capable key talls at either end and sufficient ability in the midfield find itself losing by six goals to a team that should be its equal?

Like Daniher after 99 games with the Bombers we still don’t know so much about a team that on the face of it has the ability.

They've got the Blues – big time

Carlton has been like John Lennon in recent years: nobody ever told me there'd be days like these. 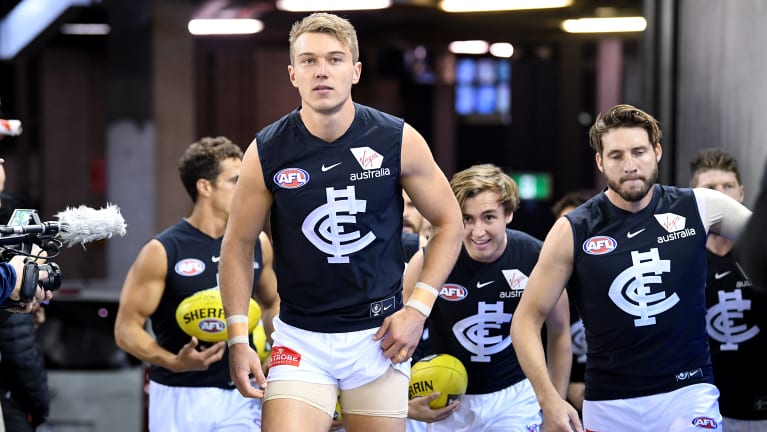 On the mend: Carlton’s ‘first ever’ rebuild will take time to pay dividends.

The reset has become the rebuild. No one fancied Carlton to be good this year, but nobody quite figured them to be this poor.

When Bryce Gibbs went and then Sam Docherty went down it was difficult to conceive how they would be better.  Presently they are also missing Marc Murphy, Matthew Kreuzer, Caleb Marchbank, Jacob Weitering (though his hold on a place in the side was becoming tenuous), Matthew Kennedy, Jarrod Pickett and sundry other second string players.

These are significant outs for Carlton because they simply have no depth.

They are young and have got younger year on year. But they are playing as a dispirited team that know their fate before the first ball is bounced.

Football is an unforgiving game and one unforgiving statistic is Brendon Bolton's win-loss record. That is now 18 wins and 37 losses. Bolton said after the match he hoped by mid-year the team would have "one or two" wins.

Any win for Carlton would be an upset and it is highly unlikely they will get that win by the mid-point. They are simply not good enough. They are a team thin on talent and experience with even their best team on the field, let alone a depleted one.

In media relations they call it putting out your trash – using a big media grabbing event to quietly drop some unpalatable news in the hope it gets swamped by the news coverage. 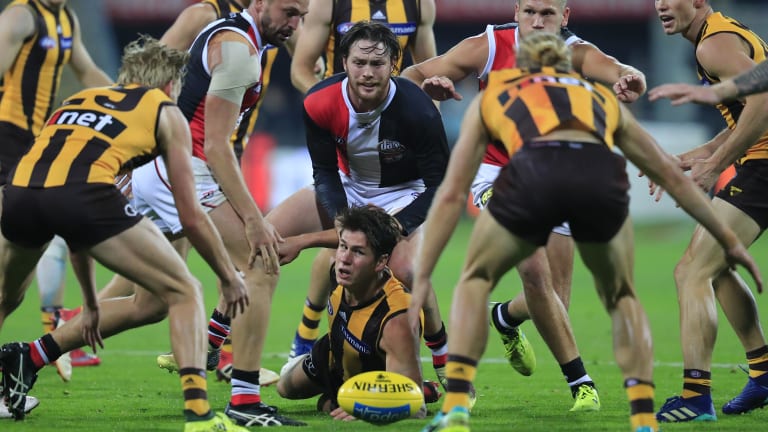 In AFL they call it playing like St Kilda (and for that matter Carlton) when attention is focused on Sunday blockbusters – Collingwood-Richmond, Melbourne-Essendon.

Let's not put too fine a point on this – St Kilda were dreadful. Again. The first quarter against Hawthorn was about as poor as they have played … since the first half last week.

And yes, Tim Membrey's howler of a miss is the obvious illustration of bad kicking for goal.

They have lost one of their best-ever forwards in Nick Riewoldt, but that alone does not explain the shift year on year, as they had already begun the shift away from Riewoldt as the prime focal point last year.

With one-and-a-half wins from six games, even in a tight competition only the blindly optimistic would fancy the Saints can make the eight from here with the way they have been playing. The reasons behind this fall-off need to be examined and understood.  Like others in this situation the Saints need to extensively review what has gone wrong, why and how to fix it.

The fans have already this year started to make their own judgment. They were away in Tassie this week,  but last week against the Giants just 14,996 people bothered for a Saints home game.

Ben McEvoy is in career-best form as he backs up on his second placing in last year's best and fairest in the first six rounds. But the 29-year-old has been carrying an enormous workload, with fatigue and soreness catching up with him late in the game against St Kilda.

He spent most of the final quarter on the bench and is expected to play against Essendon next week but the Hawks are cuddling him when they can. 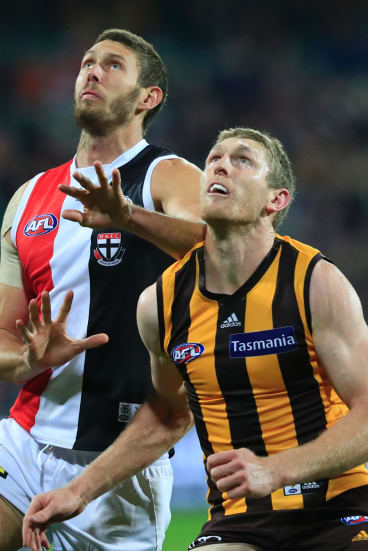 On song: Hawks’ ruck Ben McEvoy. get set for a tap against Saints’ Tom Hickey.

That's why the comeback of Jonathan Ceglar from a knee reconstruction is keenly anticipated by the Hawks.

Ceglar, who missed last season, will return in the VFL next week after delaying his comeback because of recent back soreness.

By Alastair Clarkson's estimation Ceglar will take about three games to get to the point where he is match fit and ready to be available for selection.

Then, as Clarkson said, it will be horses for courses when it comes to selection of the big men. However, as a coach who has always preferred two ruckmen in the team, as long as they can mark and goal up forward, he is preparing to play both.

"If you have got two and they can have an influence in both parts of the ground, forward and midfield, then that is something worth exploring, so we'll probably do that at some point in time," Clarkson said.

Could it be a point of difference for the Hawks to separate them from one ruckman teams such as Richmond, Adelaide, Greater Western Sydney and the Sydney Swans as they look to qualify high up the ladder once again under Clarkson?