The Atletico Madrid star guided a super header into the top corner on the hour mark – and then hit a penalty in similar fashion with 10 minutes remaining. 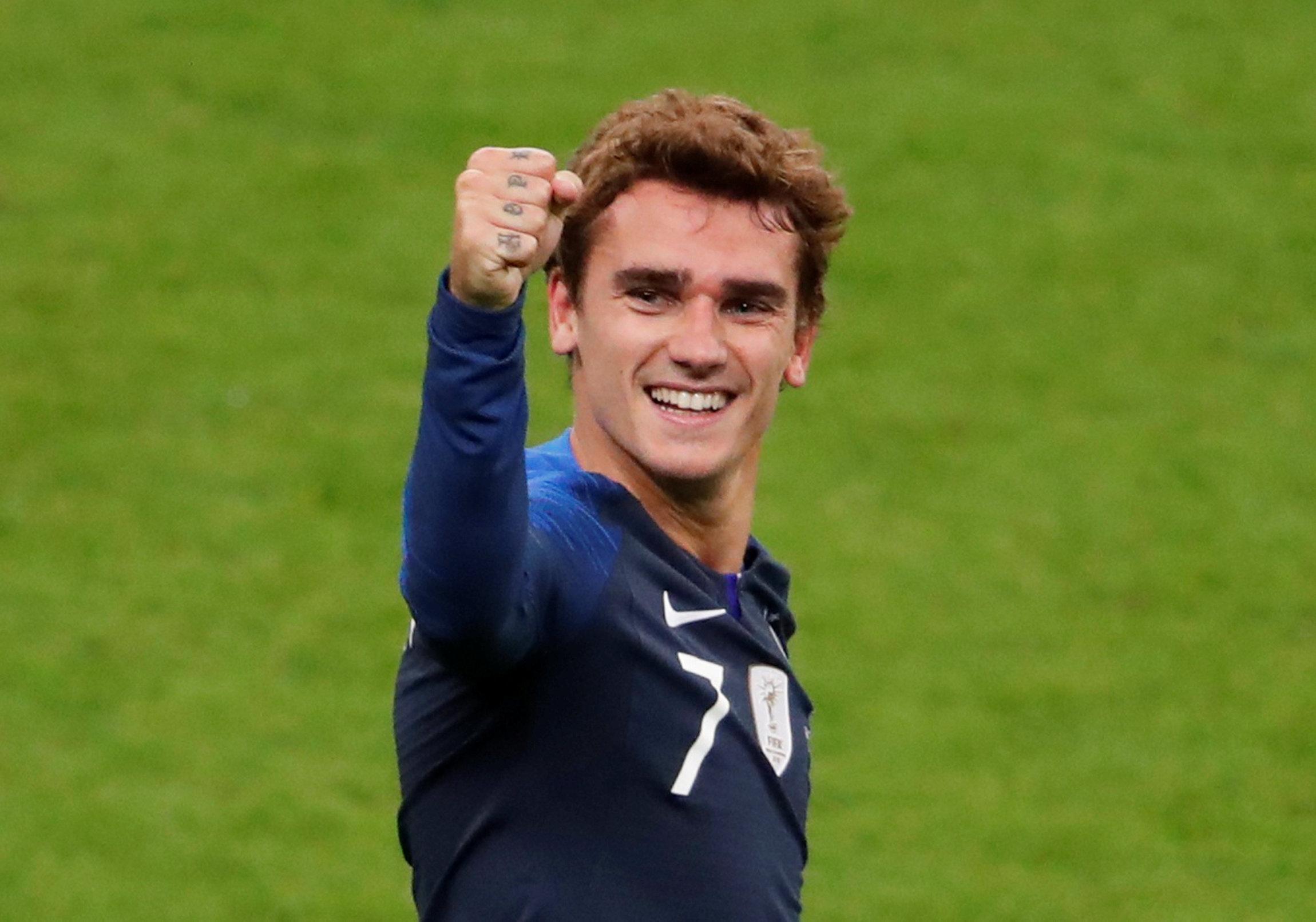 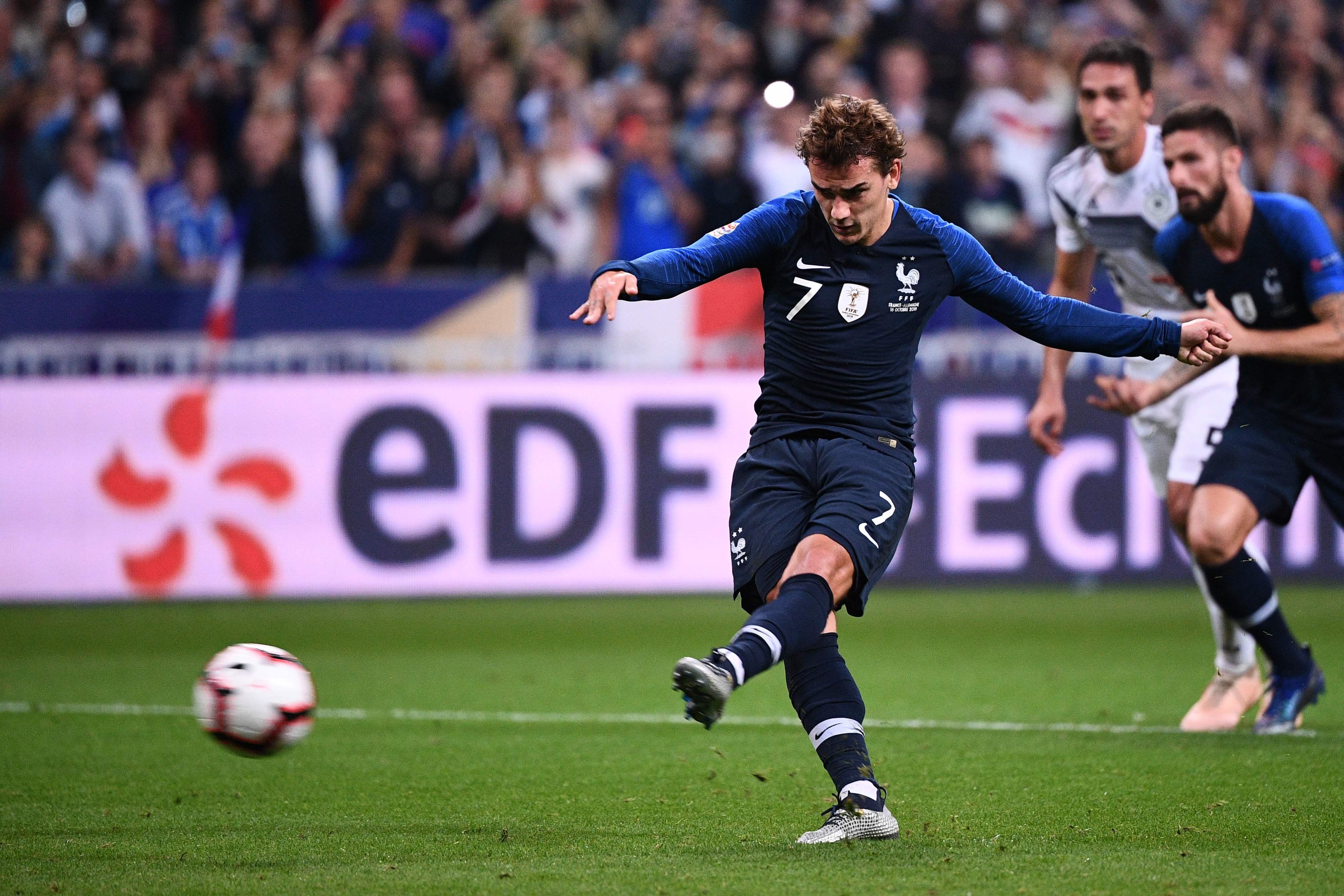 Another loss sees Joachim Low’s men rooted to the bottom of Group A with just one point from three games.

And after their 3-0 battering at the hands of Holland last week, Germany are now undergoing their worst run of form for 18 years.

They now must beat the Dutch in the reverse fixture in Berlin next month to stand any chance of remaining in Europe’s elite tier of sides.

No-one will now remember how well the Germans started to well thanks to their own 13th minute spot-kick from Toni Kroos to momentarily shock the world champs. 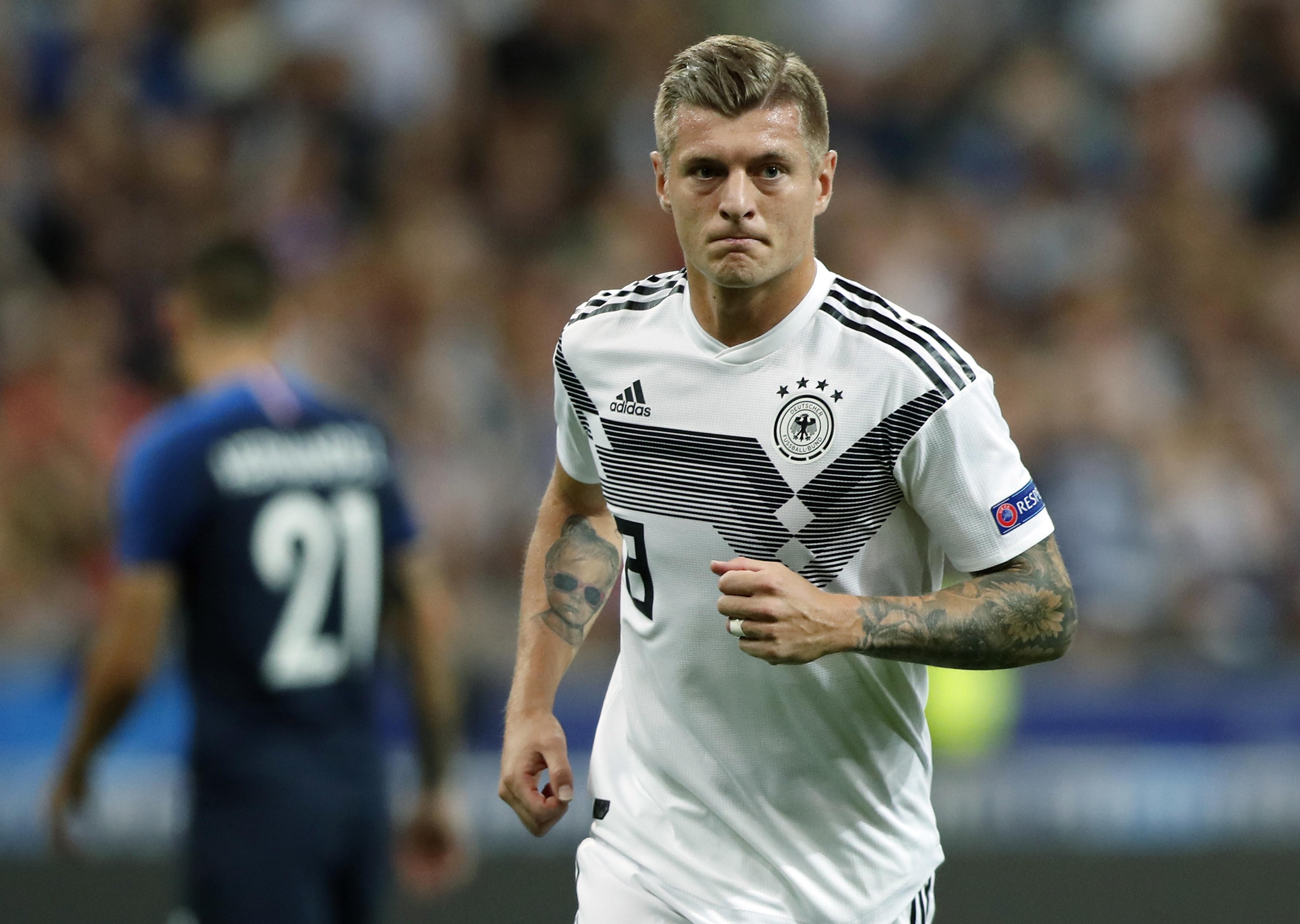 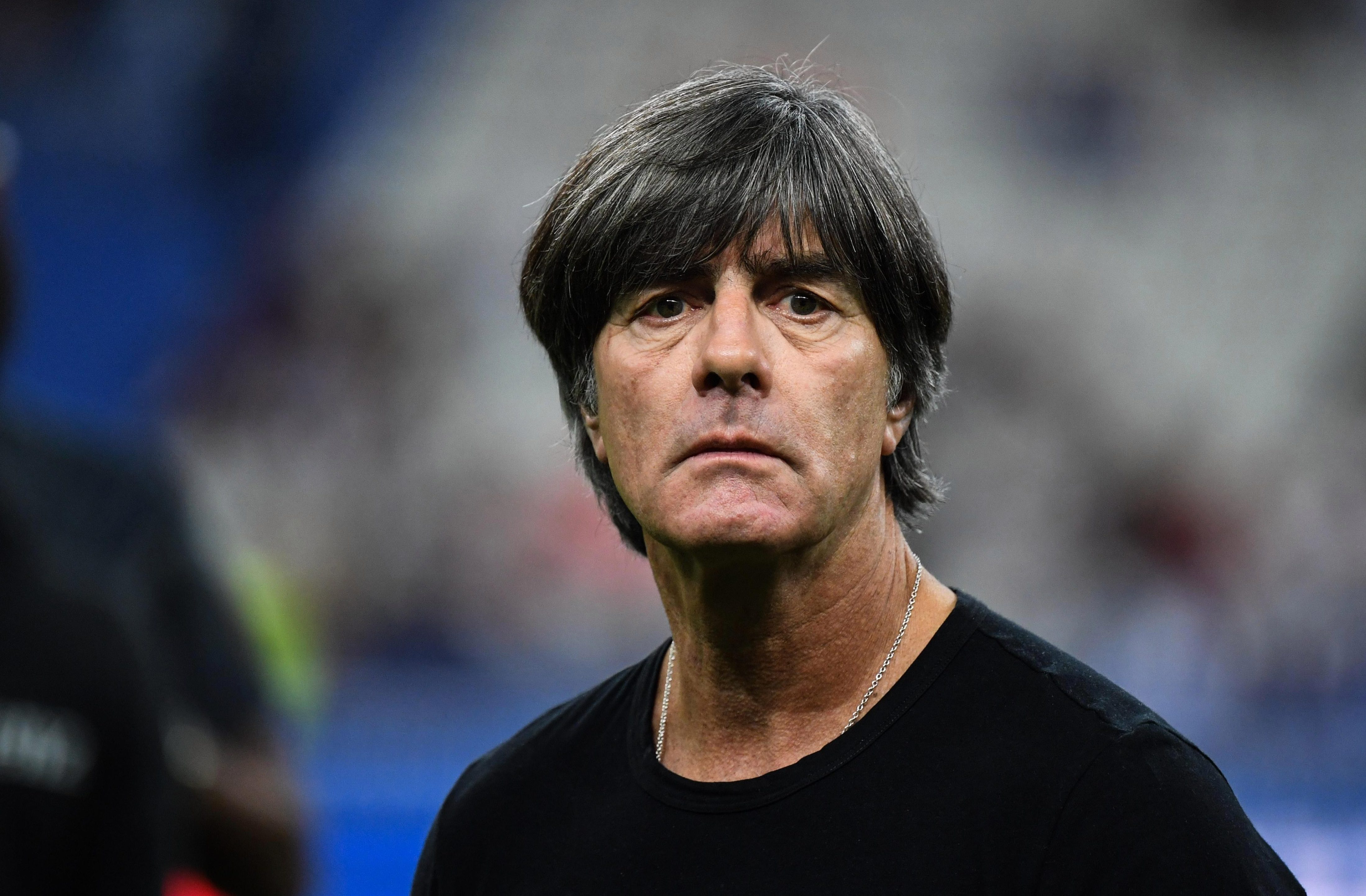 The visitors will at least take solace from their lively start at the Stade de France – and took advantage of a half-asleep Paul Pogba to gain control in the best possible way.

Pogba’s showboating on the half-way line allowed Joshua Kimmich to rob him with ease and storm towards the area – feeding the returning Leroy Sane.

The Man City winger’s pulled-back cross struck the upper arm of Presnel Kimpembe – a harsh call but one that had been coming for the visitors.

Kroos slotted into the corner, puffing out his cheeks after Hugo Lloris’s fingertips were not enough to tip it around the post.

It could, and should, have been two five minutes later as Sane broke once again at speed as the French struggled to contain the counter – but his delivery for Timo Werner was heavy as Lloris palmed away.

France responded well – Kylian Mbappe running the German defence ragged in search of a way back into the game.

But it was Olivier Giroud who had Les Bleus’ best chance of the first half – firing over a trademark flick at the near post after a dangerous run from Blaise Matuidi.

Mbappe then got his chance six minutes into the second half – one-on-one with the man-mountain that is Manuel Neuer and a cheeky attempt to curl it around him.

The Bayern Munich shot-stopper matched it though to tip it wide. 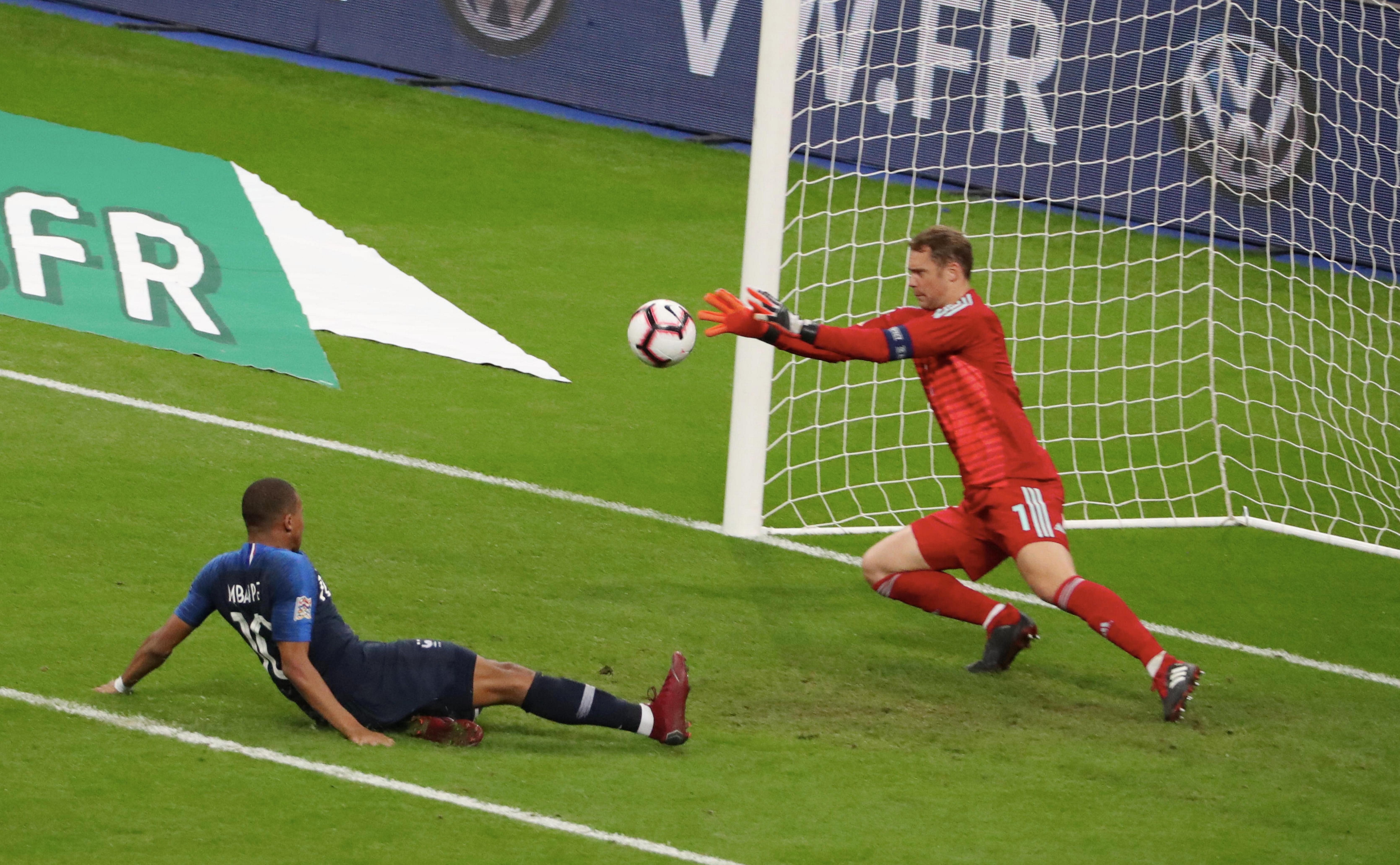 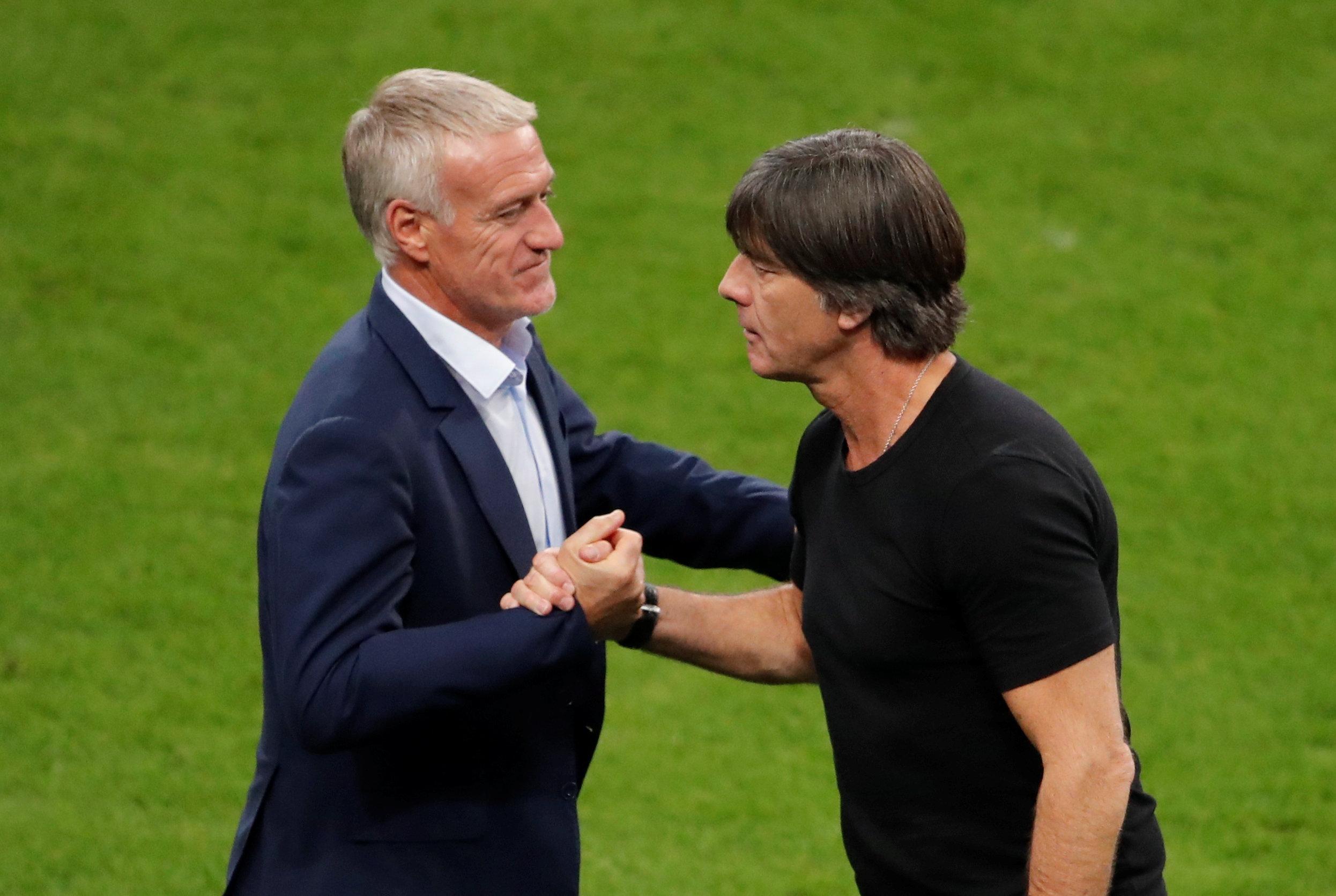 And just when it seemed the French were running out of ideas, Griezmann had a brainwave and decided to use his head to great effect.

Lucas Hernandez’ whipping cross looked to be far too hot to handle, but France’s No.7’s elastic neck helped it on its way into the top corner.

The French then never really lost control again – visible by the Mexican wave filling the ground with 15 minutes remaining.

And Griezmann then celebrated with a bizarre wave after sending Neuer the wrong way from the spot – Matuidi had been brought down clumsily by Mats Hummels.

You wouldn’t blame Low for taking the wave as a sign to wave back – his 12-year reign as the king of German football appears to be drawing to a close.