The ''Free Billy'' chants started long before half-time in Melbourne on Friday night.

Billy Slater, one of the most popular players in rugby league – and the greatest fullback of the modern era – faces being rubbed out of next Sunday's NRL grand final because of a shoulder charge. 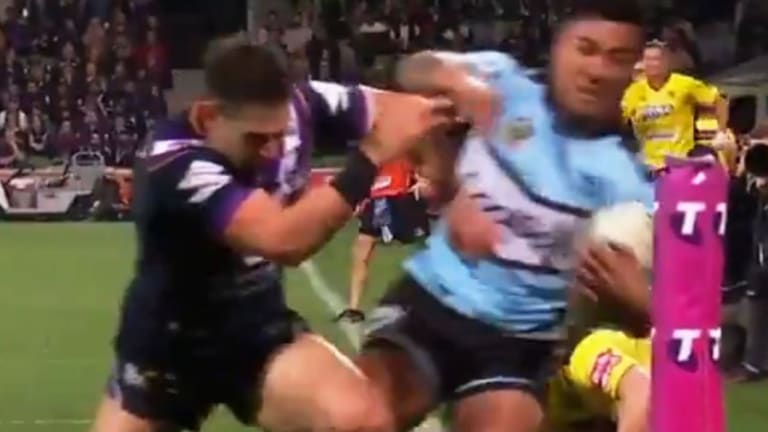 The critical moment: A front-on shot of Billy Slater knocking Sosaia Feki out of play with an apparent shoulder charge.

Slater, who will retire this season, bagged two tries in the Storm's powerhouse 22-6 win over Cronulla.

But the 35-year-old will almost need a minor miracle to avoid a charge from the match review committee for his 14th-minute shot on Cronulla winger Sosisa Feki as he looked to score a try in the left corner.

Slater was penalised as replays showed him collecting Feki with his left shoulder. 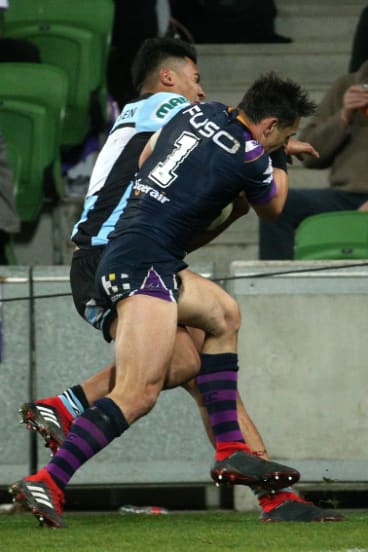 "I was coming across at speed and actually thought Sosaia Feki was going to step back on the inside. It was a collision in the end," Slater said after full-time.

"It was one of those things where both players were running at speed to get to a position.

"It would have been an awkward place to place my head if I had to duck down. There was no malice in it, I don't think.''

Under the NRL rules, a shoulder charge constitutes a tackle that is forceful and where the player ''does not use or attempt to use his arms (including his hands) to tackle or otherwise take hold of the opposing player''. The match review committee will announce any charges on Saturday afternoon. A grade-one shoulder charge carries 200 points, which is the equivalent of two matches, but even with a guilty plea, Slater would still be facing at a one-match ban.

Slater's teammate Cameron Smith was suspended from the 2008 grand final because of a grapple tackle, while South Sydney hooker Issac Luke missed the 2014 premiership victory because of a dangerous throw.

Neither Smith nor Luke, however, were dropping the curtain on their careers that year.

The race-loving locals would have also recalled jockey Craig Williams copping a suspension and watching Dunedin win the Melbourne Cup without him in 2011.

Jahrome Hughes would be an early contender for fullback if Slater is suspended.

The Storm have the chance to become the first team since 1993 to win back-to-back titles.

Footy fans up and down the east coast will want Slater to play, especially given Feki was not injured in the tackle.

But the NRL will also feel obligated to enforce the rules, regardless of the big occasion.

If it was his last game, at least Slater gave the Melbourne faithful plenty to cheer as he ran for 179m and had eight tackle busts.

Slater brought the wonderful 26,621-strong crowd to life when he split Matt Moylan and Ricky Leutele after half an hour.

Ten minutes earlier he steamed on to a Felisa Kaufusi pass and threw the final pass for Brodie Croft to open the scoring.

Just before the break Slater was over again near the posts when he pounced on a Smith grubber to give Melbourne a 20-0 lead. 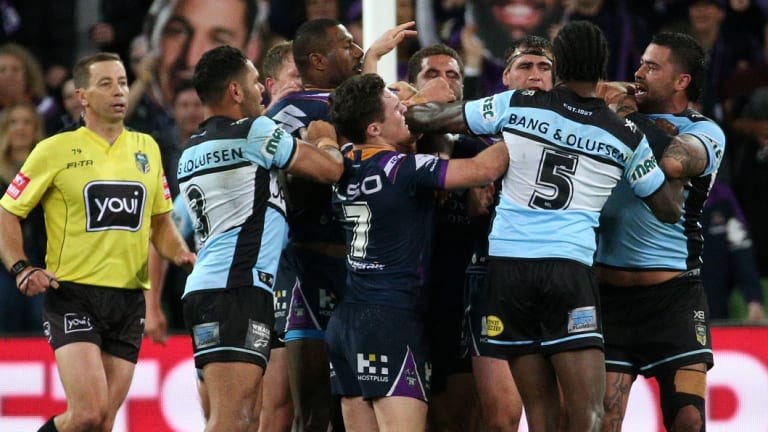 All the focus remained back up field where public enemy No. 1 Andrew Fifita was engaged in a melee with Kenny Bromwich and Suliasi Vunivalu. Fifita, who played the entire first half without a spell, was also penalised for a crusher tackle on Bromwich just before the ugly stand-off.

Cronulla went without Josh Dugan before the game and were already up against it once skipper Paul Gallen failed to overcome a shoulder injury.

They had a golden chance to take the lead when Slater flattened Feki, only for Moylan to spill the ball with nobody around him.

Cronulla were prepared to throw the ball around in the second half and thought they had a try through Jesse Ramien, only for Edrick Lee to have been pinged for a knock-on. 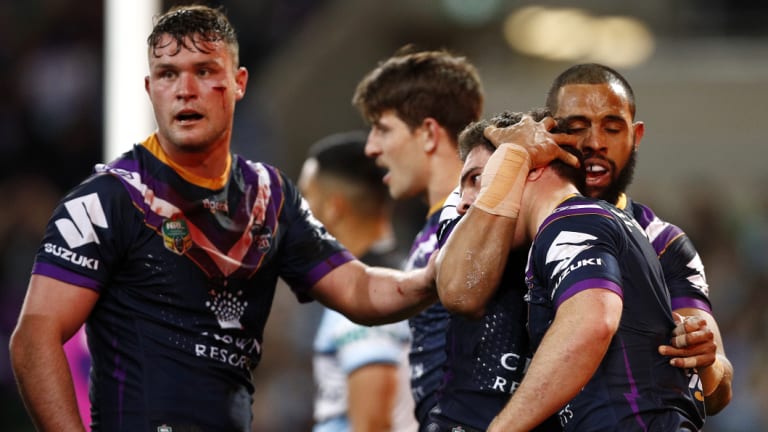 Night to remember: Brodie Croft of the Storm (second from right) celebrates a try in the first half.

Completion rates plummeted for both sides as the result looked certain a long way out from full-time.

The retiring Luke Lewis scored a well-deserved try for the Sharks with 11 minutes on the clock. He watched the last minutes of his career from a white plastic chair on the sidelines.

The Storm will back themselves against the Sydney Roosters or Souths, who blew a six-point lead late in the game down south only a fortnight earlier.

The ''Free Billy'' chants will continue all weekend.