French connection: Eel could slip away over fullback snub

Bevan French’s frustration at not being able to nail down a fullback spot at Parramatta could result in the Eels star moving on from the club.

French joins Corey Norman and Jarryd Hayne as big-name Eels whose future is clouded beyond this season. While Hayne is off contract at the end of the year, French and Norman are signed until the end of 2019. However, for different reasons, there is a growing feeling they may not see out their deals. 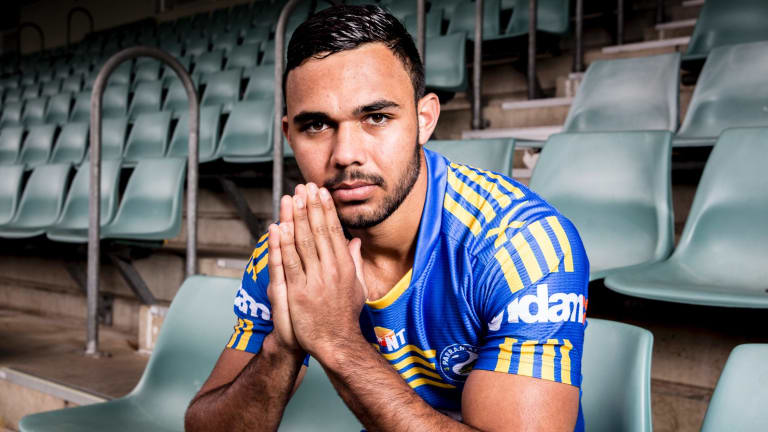 French began the year as Parramatta’s first-choice fullback at a time when Clint Gutherson was injured, while Hayne wasn’t considered match-fit enough to fill the position. The Tinga product quickly found himself on the wing despite his preference to play in the No.1 jersey. Norman is the latest to be given a shot as coach Brad Arthur’s custodian, with Hayne yet to return from the hip complaint that has sidelined him since round four.

We can reveal that French’s representatives have sounded out rival clubs about their fullback needs, letting them know the try-scoring machine wants an opportunity to establish himself at the back. Gold Coast, North Queensland and Wests Tigers are among the sides on the lookout for a fullback, although the Tigers have made Canterbury’s Moses Mbye their priority.

French, who has scored 31 tries from 37 NRL appearances alternating between wing and fullback, is worth more on the open market as a custodian. If he was to get an offer elsewhere, the Eels would have to decide whether it is worth enforcing his contract.

After starting the season as one of the premiership fancies but languishing in last place, there is widespread acknowledgement that Parramatta’s roster needs a major overhaul. Norman is also unsettled and has been down on form. After showing initial promising signs, his halves combination with Mitchell Moses isn’t working and it’s understood the Eels wouldn’t stand in his way if he asked for a release.

Hayne’s injuries have also prevented him from mounting a case for a contract extension. The former Titan hasn’t played since being sidelined with a hip injury injury in round seven, although he is expected to come back either this week or next. While he has taken a $700,000 haircut to return to the Eels, he is yet to give Parramatta much return on the $500,000 gamble they took on him.

The potential departures of Hayne, French and Norman would fast-track the roster revamp of the underperforming club.

The Eels board will meet on Wednesday and dissecting the diabolical start to the season will be high on the agenda. One of the discussion points will be whether the Eels need a head of football, a position currently the domain of chief executive Bernie Gurr.

There could be changes in the boardroom too. Parramatta chairman Max Donnelly, in his attempts to push through constitutional reform, will consider putting forward a motion allowing previous directors to again run for the board. That raises the prospect of the likes of Denis Fitzgerald, the self-proclaimed Emperor of Parramatta, returning to the corridors of power.

Warrington is making an audacious bid to sign Johnathan Thurston for next season.

There is no lack of ambition at the Wolves and they have a proven ability to lure marquee talent. The club attracted eighth Immortal Andrew Johns for a brief stint in 2005, one recalled fondly by both parties. While the JT bid is a long shot – the Cowboys playmaker is almost certain to hang up the boots at season’s end – the Wolves are holding out a glimmer of hope in what would be a huge coup for Super League.

The first nights of State of Origin camp have traditionally been a booze-fest, but Brad Fittler is not one to stick to convention.

One of the first things the NSW players will do when they get together next Tuesday night is feed the homeless in Woolloomooloo. Fittler has long been a supporter of Father Chris Riley’s Youth off the Streets campaign, including the Hogs for the Homeless rides he has done for charity.

The Blues will also head to Randwick racecourse on the Saturday before Origin II, but it won’t be to drink and punt. The team will be there to raise funds for another charity, the Mark Hughes Foundation. It’s all part of Fittler’s quest to connect with the community.

Nelson Asofa-Solomona is poised to extend his time at the Storm.

The New Zealand prop is set to commit for an additional season, just as the club announced the retention of Felise Kaufusi. Josh Papalii will also be staying put at Canberra in a deal that will be announced soon.

It was a heart-stopping win after the siren but rather than yahooing with his Rabbitohs teammates, Damien Cook’s first thoughts were with his hooking counterpart.

Cowboys rake Jake Granville was shattered after giving away the match-deciding penalty right on the buzzer. In a mark of the man, Blues contender Cook was one of the first to console him.

"I could see how devastated he was,” Cook told colleague Adam Pengilly.

“I've been in that position before when I gave away a penalty to level the scores up and ended up losing in extra time. It's a really bad way to lose. It was at the same time for us when we'd lost a few games. You're doing everything you can to win games of NRL and the comp is so close. He's a great player and his intentions were to never give away a penalty, he was trying to stop the field goal. I just consoled him.”