Djokovic was given a ferocious fight in the early stages with the opening three games against Verdasco lasting 29 minutes on Court Philippe Chatrier.

But what looked like being a long night for the 12-times grand slam champion ended up being a reasonably comfortable one.

One break of serve was enough to take the opening set and, despite Verdasco producing some thunderous winners to stay in touch in the second, the left- hander's challenge faded. 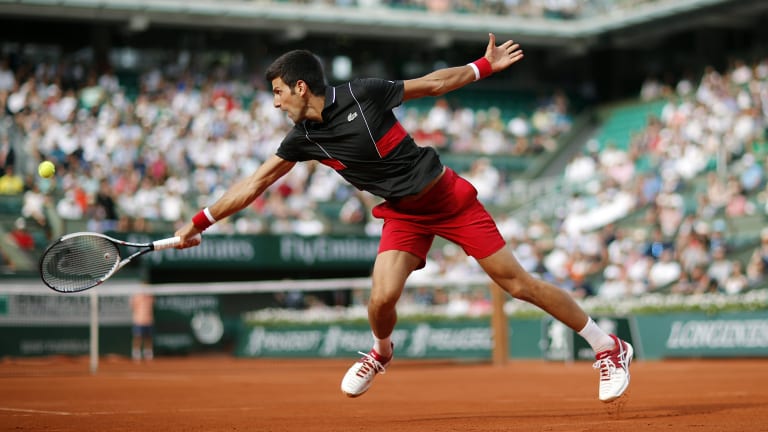 Novak Djokovic returns the ball to Fernando Verdasco during their fourth round match at the French Open on Sunday.

Djokovic, who completed his career grand slam by winning in Paris in 2016, raced away with the third set to close out victory in two hours and 25 minutes.

World number 72 Cecchinato, who was found guilty of match-fixing by the Federation of Italian Tennis in 2016, had never been beyond the first round of a grand slam before.

Cecchinato was handed an 18-month ban for match-fixing but was later cleared by the Italian Olympic Committee because of irregularities regarding how the evidence was gathered.

"For me it's a dream, I'm really, really happy," Sicilian Cecchinato, who rallied from two sets down in the first round against Marius Copil, said on court.

"And now I'm playing the quarter-finals, it's unbelievable."

The 25-year-old Cecchinato could be joined in the last eight by compatriot Fabio Fognini, who plays third-seeded Croatian Marin Cilic on Monday.

Should Fognini win, it would be only the second time since tennis turned professional in 1968 that Italy has had more than one player in the men's singles quarter-finals at a grand slam.

The only other occasion was at Roland Garros in 1973, when Paolo Bertolucci and Adriano Panatta reached the last eight.

Fognini was the last Italian man to make the quarter-finals in Paris in 2011.

Cecchinato found some gravity-defying angles to outmanoeuvre Goffin in the first set.

The Belgian faced more break points in the fourth game of the second set but managed to see them off and after receiving treatment on a sore elbow, he broke for 4-3 before levelling the match.

Cecchinato, however, was on fire in the third, which he pocketed when Goffin buried a routine smash into the bottom of the net.

After an early trade of breaks in the fourth, Cecchinato broke Goffin's serve with a fine backhand down the line to move 5-3 up.

Cecchinato kept his cool and won the next game to love, ending the contest with another backhand winner.