The smallest person at the party eventually stood tallest.

New Dockers football boss Peter Bell entered Marvel Stadium last Monday for the start of the AFL's trade period a relative novice but emerged a superhero after a tenacious campaign not dissimilar to his feats on the field for Fremantle.

The eighth and final day of trade talks between the 18 clubs was always going to be heavy but the 2018 edition was the most hectic yet, with Bell and club CEO Steve Rosich emerging from the flurry of last-minute meetings grinning widest. 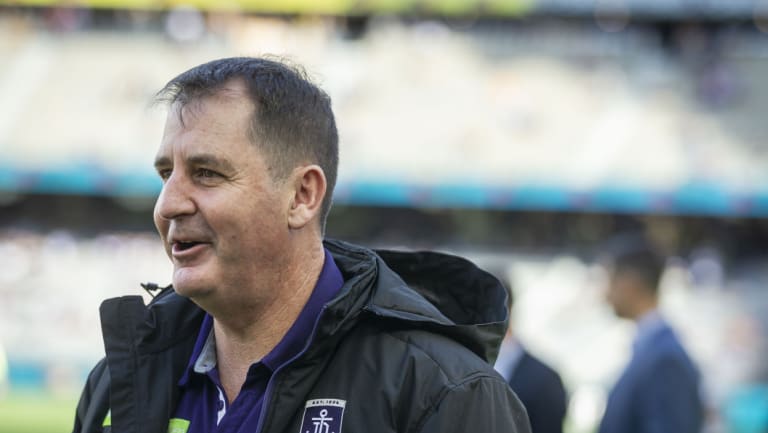 A positive 2018 trade period could shift coach Ross Lyon’s expectations of his rebuilding Dockers next season.

While the Eagles won the 'big dance', the Dockers emerged triumphant from the spoils of the 10-day period that sometimes felt like the late drunken hours of a high school house party with everyone eyeing off each other in various corners plotting their way home.

All the big fish bar West Coast target Tim Kelly were satisfied, with Dayne Beams (Brisbane to Collingwood) and Dylan Shiel (GWS to Essendon) the last to land in their desired nests just before the 5.30pm WST deadline.

'Due diligence', 'preferred destination' and 'club of choice' are terms we hopefully don't hear for another 12 months, if ever, but it was the first that led Fremantle to last week curiously trade its first-round draft pick to Port Adelaide and declare its interest in gun Melbourne forward Jesse Hogan was over.

The club's new position drew gasps then condemnation but the Dockers now have picks 14 and 31 in one of the strongest and deepest drafts in history, GWS big man Rory Lobb, Bomber utility Travis Colyer, Richmond free agent Reece Conca and one of the competition's elite key forwards in Hogan … for a relative loss of pick six and Lachie Neale.

But as Hogan sweats trying to be fit for round one, 2019, so too will coach Ross Lyon with him.

Not much went right for the Dockers coach in 2018 but, to his credit, he genuinely committed to that rebuild, developing the club's bunch of impressive kids and collecting eight wins along the way, with the losses at an average of 60 points an indicator to his list's inexperience and lack of depth.

But after the success of his new footy manager and CEO in Melbourne this week, Lyon may well be adjusting his view with vigour for the 2019 campaign, depending on whether Hogan is his hero.

Sound familiar? Lyon's last piece of the puzzle he thought would help make a Fremantle premiership was also picked up with a potential career-ending injury and off-field baggage.

Hogan is the big fish Fremantle has cried out for up forward since club legend Matthew Pavlich's retirement and, like big Pav, the 23-year-old ex-Demon is the real deal, and was in All-Australian form before his nasty navicular injury against Sydney in round 21.

The 71-gamer had been eager to return home to Perth and his family after struggling with the loss of his father, requiring treatment for testicular cancer and with mental health problems the past few years.

Hogan's long-term injury outlook and off-field issues are less risky than Bennell's and other recruits signed and who have failed to fire for Fremantle but the club's much publicised "due diligence" with the forward, who has kicked 152 goals at Melbourne, did amount to only a three-year offer after reports earlier this week he wanted $8 million over eight years.

"He has taken a pay cut," his manager confirmed after the trade with Fremantle was finalised.

Lyon and Fremantle fans will pray the supreme athlete and natural forward pays his dues, no matter the figure, and considerably quicker than Bennell. His injury on the eve of Melbourne's charge to the finals is complex to treat but if managed successfully will tempt Lyon to alter his focus with just two years left on his current coaching contract with the Dockers.

Does he down tools and fire the gun, or keep the ship sailing slow and steady? 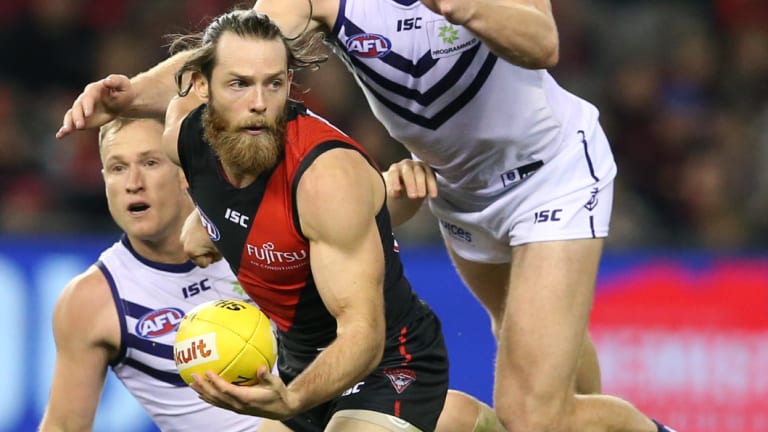 Critically the 2019 list now seems to have enough depth and talent to withstand adversity and injuries and challenge for finals.

Lyon has shown he can get a handy list to grind our four points more often than not and may be tempted to do so and roll the dice if the draw released in November is favourable early to Fremantle. He and the club will be under pressure to declare its intentions.

While September bells may ring in Lyon's head, finals should still be an afterthought for everyone at Fremantle.

The Dockers simply don't have the depth to go deep in September, but may well do so if they develop the band of youngsters they toiled for via the draft in previous years.

Getting your rocks off for the night may be well and good for some, but real love is what matters long-term for Dockers supporters now.