Britain's Efe Obada only began playing American football four years ago after a traumatic childhood during which he was abandoned and homeless, but he defied the odds and on Sunday (Monday AEST) enjoyed a dream NFL debut.

Nigerian-born Obada, a defensive end with the Carolina Panthers, earned an interception and a key sack in his team's victory over Cincinnati to add yet another chapter to what was already a Hollywood-worthy story. 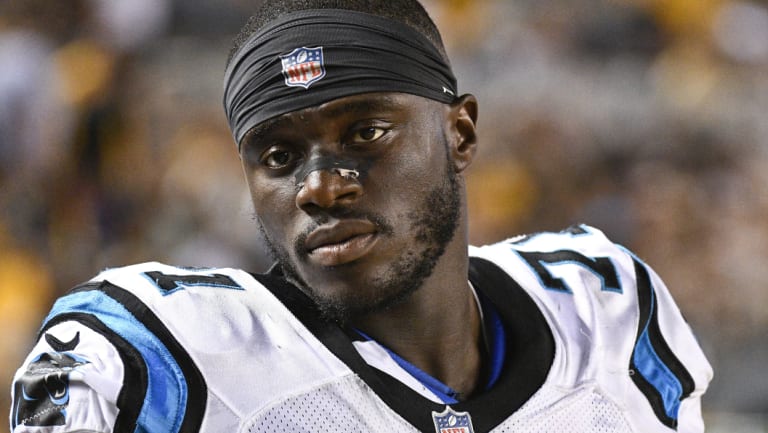 Some story: Carolina’s Efe Obada has traveled an incredible path to the NFL.

"I'm over the moon," Obada told the Panthers' official website after getting the game ball for his efforts. "Words can't describe how I feel right now. I'm still filled with adrenaline."

What made Obada's first NFL game all the more impressive was the against-all-odds journey the 26-year-old had to endure just to get there.

When Obada was 10 years old, he and his sister were trafficked to Britain from the Netherlands and abandoned on London streets when plans to be raised by someone there did not pan out.

Obada spent many of his teenage years being shuffled from family to family and embroiled in London's gang culture.

Despite having never been involved in an athletic endeavour, Obada decided to practice with a London-based American football club and immediately fell in love with the game, which he saw as an outlet for some of his anger.

Obada began playing with the London Warriors in 2014 and his athleticism caught attention and led to some practice squad time with the NFL's Dallas Cowboys in 2015 and parts of the 2016 off-season with Kansas City and Atlanta.

He was then one of four players to participate in the NFL's International Pathway Program, which began in 2017, and went on to earn a spot on the Panthers' roster.

"This team is like my family to me. I'm happy how supportive they are," said Obada. "They see the hunger in me. They see the uphill battle I had to climb in order to get here."

Obada made his presence on the field felt early on Sunday when he sacked Bengals quarterback Andy Dalton to force a fumble on a play that was overturned. 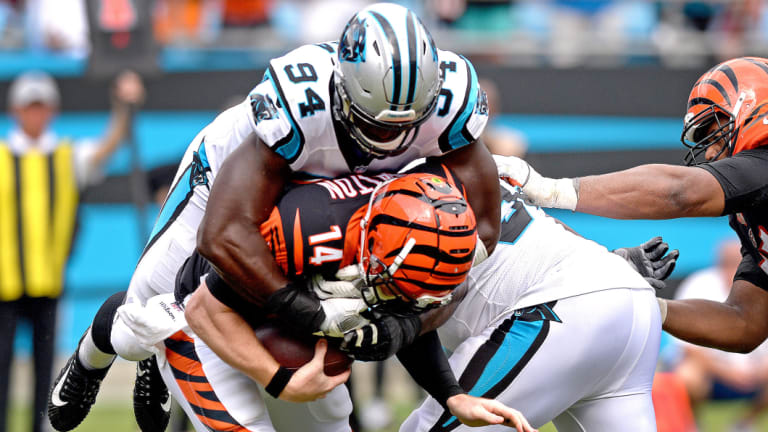 He earned his interception off a tipped ball in the fourth quarter, before sacking Dalton and setting the stage for an interception on the ensuing play that effectively sealed the 31-21 victory.

"I'm filled with adrenaline right now and I'm happy, but this is just the beginning," said Obada.

"I'm happy, but I don't want to be a one-hit wonder. I want to start creating that momentum and just keep going.

"I'm going to go back in the lab, prepare for the next opponent and go after it."