Adrian Bott might be a bit more reserved than training partner Gai Waterhouse but he had no hesitation in putting the Golden Rose on the agenda for Master Ash after his Up And Coming Stakes win at Randwick on Saturday. 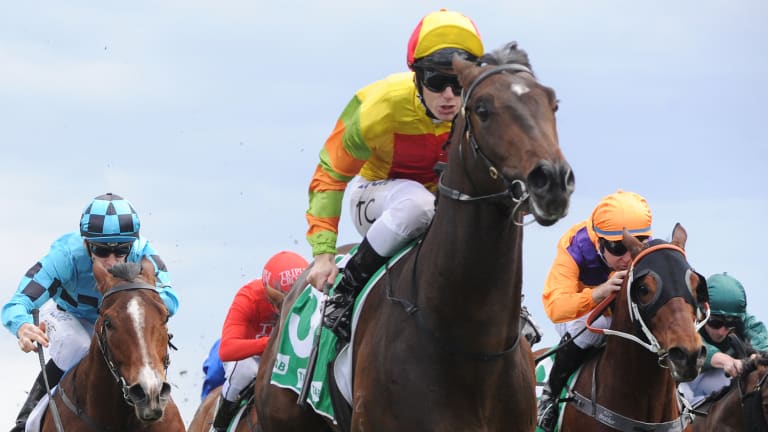 Good Judge: Tim Clark chased hard to get the ride on Master Ash.

At only his third start, Master Ash came home over the top of leader Danawi to deliver on the promise the stable had seen in him.

“We have thought that he would be a miler, but the way he won there you would have to think he would be very competitive in the Golden Rose,” Bott said. ‘‘It would be a great race for him.

“He enjoyed that trip and I would think we would go up to the 1500m of the Stan Fox Stakes and come back in trip to the Golden Rose, like last year’s winner.

“We always thought he was going to be a very nice progressive type and him held in high regard.

“He has matured in the last month to six weeks physically and mentally, and we saw that in the way he raced. Credit to Tim Clark, as he has always had great faith in this horse.”

Master Ash settled in the perfect spot and out-sprinted Danawi to go away and win by length, with heavily backed favourite Smart Elissim a half-length back in third. It was the middle pin of winning treble for Clark, who also won on Segenhoe before taking out the Toy Show Quality on Egyptian Symbol.

“I rode him one morning two or three months ago at three-quarter pace. He gave me a great feel and from that day I pestered Gai and Adrian to ride him,” Clark said.

“He has improved so much in the past five weeks. I rode him on Tuesday morning here and he felt unbelievable. I was very confident he would run a bold race.

“He gave me a lovely ride throughout. He had that fitness on his side. I put it to them a bit early and he was really strong late.”

James Innes thought it would take a good horse to run him down when Danawi sprinted and believes the son of Exceed And Excel, which has been runner-up at all three of starts, is still a Golden Rose contender.

“He took himself to the front and relaxed but he is stil learning about it,” Innes said. “He just floated for a couple of strides when I wanted him to grab the bridle in the straight. He was very strong to the line, but it would be good if he could get some cover because that will only help him.”

Danawi’s trainer Tim Martin is considering backing him up in the Ming Dynasty Quality next week.
“I just want to get him back to Rosehill because I think he will go better there,” Martin said. “We need to win a race to get him in the Golden Rose. He is going in the right direction for that.”

It was another brilliant front-running from Clark for Egpytian Symbol home in the Toy Show.
He went to the front in a race devoid of leaders and made all.

“It was one of those races where there was just no speed at all,’’ Clark said.
‘‘The plan wasn’t exactly to lead, just to come out and have her where she was comfortable.”