Cronulla captain Paul Gallen sparked his side to a 24-16 comeback win over the Wests Tigers on Sunday as Michael Chee Kam became the latest man sin-binned in the NRL's disciplinary crackdown.

The Tigers lost Benji Marshall before kick-off to a calf injury which coach Ivan Cleary said could cost the veteran playmaker six weeks on the sideline, but the visitors still led 10-2 at half-time only to be run down after the break.

Gallen was the inspiration for the comeback, firstly tucking the ball under his arm and charging through three Tigers defenders to score a bullocking try in the 48th minute. 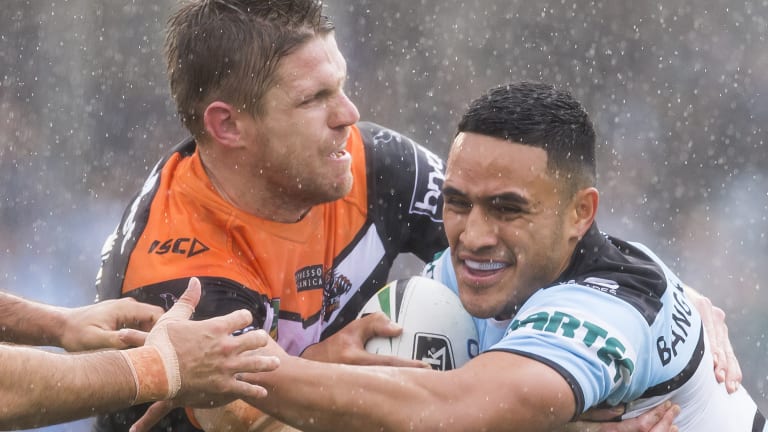 Moments later the veteran fielded a Luke Brooks kick and fed Valentine Holmes into a gap, allowing the Queensland winger to charge 90 metres and put his side back in front.

Edrick Lee then scored the Sharks' third try in nine minutes and the home side never surrendered the lead in front of 13,093 delighted fans at a wet and windy Southern Cross Group Stadium.

Chee Kam's 33rd-minute infringement marked the fifth time in six games this round a player had been given 10 minutes in the bin.

"It's pretty easy to get in the bin at the moment … the guy comes off the bench, he's not sure about warnings and all of a sudden he's off," Tigers coach Cleary said.

"Maybe it's just me but I'm seeing guys put in the bin and I'm not seeing the context.

"It's just become part of the game now that you just lose a guy in the bin like that and you've got to deal with it. It's happened today where both sides get warned.

"Players are definitely learning and we discuss it … once a warning's gone out you've got to be squeaky clean.

Tigers co-captain Josh Reynolds was also bemused by the excessive use of the sin bin.

"Just with today, we both got warned but I think the grey area is how long does the warning go for? The Sharks next penalty, whenever it is, why didn't they get one in the bin?

"I asked the ref I said why did Chee [Kam] get 10 because the penalty before that was Alex Twal who just got tangled up in the ruck and he didn't really hold him or anything. That was our next one and that was the ref's excuse as to why Chee got sent off."

As it turned out, Cronulla were unable to take advantage of the Tigers being a man down and barely threatened with the ball until Gallen lifted his side.

"I was a little bit concerned at half-time, to be honest, just the feel in the dressing room, it was just a little bit down," Gallen said.

"I tried to talk and get [them] going but I'm not really always like that. I like to do it by my actions."

Sharks coach Shane Flanagan was full of praise for his lock forward, in his 18th year as an NRL player.

"It doesn't surprise me. He's a quality player and he's still playing good footy as you saw today," Flanagan said.

"We spoke about it during the week that we needed to respond [after losing to Souths in round 13] and I thought we responded accordingly.

"It was always going to be one of those games that we needed just to get home.

"In the first half we didn't have any blocks of possession and obviously couldn't mount any try line pressure on them and then when we went down there we dropped the ball.

"In the second half we played with a bit more composure, put them under some pressure and came up with some decent tries."