The Jets, a football team that has been an N.F.L. punch line for years, asked a comedian to be the master of ceremonies at a loud, flashy event to unveil the team’s new uniforms on Thursday.

J.B. Smoove, who has been a suffering Jets fan for decades, stood on the stage at Gotham Hall in Manhattan and urged the star players who were modeling the new threads to wear them proudly and become accustomed to them.

“Get comfortable,” Smoove said to the quarterback Sam Darnold. “These are your damn pajamas.”

When a team finishes last in three consecutive seasons, and has not made the playoffs in eight, sometimes the best approach is to make cosmetic changes and laugh about it. This, after all, is a team that counts a butt fumble among its most memorable moments of the last several years, so maybe a change was in order.

Yet, aside from Smoove, the Jets were very serious – even solemn, at times — about this new endeavor, treating the launch of the new uniform at an event space on Broadway much the way a major tech company introduces a fancy new device.

There was a D.J., flashing lights, a celebratory video, cheerleaders and, of course, fans chanting J-E-T-S. It was as close as the Jets get to a parade these days.

They said that work on the new uniforms began in 2014, which is a long time for anything to do with fashion. Christopher Johnson, the chairman and C.E.O., quipped that it took longer to come up with the new duds than it did to build the current stadium in New Jersey.

But he noted that it was the perfect moment for a new look. The Jets, who were 4-12 last year, have a new coach, Adam Gase, a talented, second-year quarterback in Darnold and several other new players. The new uniforms, he said hopefully, signaled a new era for Gang Green.

There was also talk of “brand identity” and a “refreshed logo,” the kind of marketing jargon that all teams use when they hope fans will buy items with the new look. (Within minutes of the unveiling, the new uniforms were featured on the home page of the N.F.L.’s website and its pro shop.) There was even a reference to work on the new design being “an extraordinary process,” as if it included some historic feat of engineering.

“You will see the vision behind the process, including the thought, energy and excitement it took to make this change a reality,” Johnson said. “Our fans asked for this change. So did our players. It was time for a new uniform, time for a new look.” 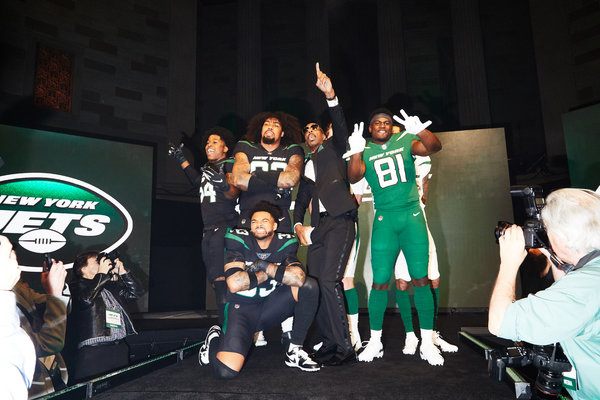 That look that fans allegedly asked for consists of a brand-new color (if that is possible) that the Jets call Gotham Green. Besides sounding like a name for a small park in Manhattan, the tint looks like a slight variation of the green it replaced.

A more significant change is the new black uniform, with a hue dubbed Stealth Black, that all the players seemed to like a lot.

Gone are the trademark vertical shoulder stripes. They were swapped out for pointy horizontal stripes that come around the shoulders and aim underneath the neckline, toward the center N.F.L. logo, which sits above the words, “New York” in capital letters. It is becoming ever more popular for teams to put their nicknames on jerseys, but the city of origin is not common.

The pants, both white – make that Spotlight White – and green have the same kind of pointy stripes made popular when the Denver Broncos changed their uniform design in 1997. The straight dual stripes that gave the previous Jets uniforms a classic flavor are gone and with them goes the traditional old logo, too.

The Jets traded in the classic white helmet and the old NY logo that dates back, with slight variations, to the days of Joe Namath and Don Maynard. (Broadway Joe, by the way, was right there on Broadway on Thursday to sanction all the changes.)

The new helmet is shiny green with a new logo that has the word, “Jets” partially silhouetted by a small football, a little nod to the football in the old logo. (The Jets and the Tampa Bay Buccaneers are the only teams with a football in their helmet logos.)

When the players, including Jamal Adams, Leonard Williams, Quincy Enunwa and Darnold, were brought on stage to showcase the new look, they danced and posed and later echoed the team line that the new look is bold, innovative and fresh.

“I think that a lot of old school people are going to have it grow on them,” Enunwa said and added, “It feels like a new team, in a way.”

That is the point. But the Jets are only the most recent N.F.L. team to change uniforms. Some have had more success than others. The Patriots changed their uniforms in 2000 and in their second season in a darker blue color, they won the first of six Super Bowls in them.