Sergio Garcia could be banned by the European Tour after he admitted purposefully damaging five greens at the Saudi International on Saturday.

The Spaniard – who five months ago became the leading points-scorer in Ryder Cup history – was disqualified following the third round of the inaugural staging of the controversial 2.7 million pound ($A 4.9 million) tournament, for which he is understood to have received a 500,000 pound ($A 900,000) appearance fee. 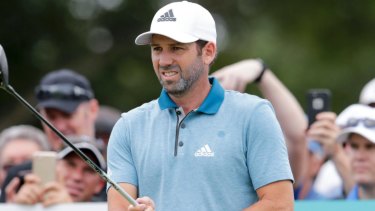 Struggling at around level par, Garcia's renowned rage got the better of him as he slammed his club into the putting surfaces several times.

Observers at the Royal Greens Country Club revealed that he was heard criticising the greens earlier in the week and on Friday was seen taking out his dislike of the bunkers by smashing down his sand-wedge.

American Patrick Reed was involved as he was in the group immediately behind Garcia who first drew the officials' attention to the gouges on the greens.

The three groups following Reed also complained to the referees and it was then that Tour chief executive Keith Pelley confronted Garcia.

The notice of disqualification for "serious misconduct" soon followed as did a statement released on Garcia's behalf by the Tour. "I respect the decision of my disqualification," Garcia said. "In frustration, I damaged a couple of greens, for which I apologise, and I have informed my fellow players it will never happen again."

It is difficult to see Garcia not being hauled in front of the disciplinary panel and the best he could then hope for is a large fine.

This is an unprecedented misdemeanour for someone of Garcia's stature. The last high-profile professional to be hit with a misconduct charge was Simon Dyson in 2013. The Yorkshireman was disqualified from the BMW Masters, forced to pay 30,000 pounds and given a two-month suspended ban. Dyson's crime was to tap down a spike mark, which was against the rules then, but is allowed now.

This is just the latest entry on the Garcia charge sheet. The 39-year-old has been warned for throwing a golf shoe at an official, spitting into a hole and for making a racist remark about Tiger Woods on stage at a function. Each time, the Tour let him off with rapped knuckles. He will be very fortunate to escape punishment this time.