Melbourne United's poise under pressure is what Andrew Gaze dreads most as his Sydney Kings brace for an NBL finals-shaping showdown on Friday.

Sydney (16-9) can snatch top spot off the defending champion visitors (16-8) if victorious at Qudos Bank Arena and then virtually guarantee a home play-off berth if successful against the finals-bound Wildcats (16-9) in Perth on Sunday. 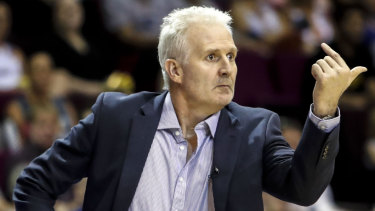 Taskmaster: Andrew Gaze knows the Kings will need to improve to secure a home finals berth.Credit:AAP

It's the sort of high-stakes basketball Gaze wants his players exposed to heading into their first finals appearance for six seasons.

It doesn't come any tougher, he says, than a Melbourne side who have trumped Sydney in all three of their meetings this season, stretching their dominance to 10 straight meetings of the powerhouse clubs.

The champions prevailed 77-70 and 84-82 in Melbourne, before a ruthless finish to clinch a 75-70 win in Sydney just before Christmas, having trailed by 11.

Gaze says victory was within his team's grasp in two of those games but they couldn't match the cooler heads of a Melbourne side who rarely falter in tight finishes.

That was emphasised again by United's overtime win over New Zealand on Sunday, when guard Casper Ware took command in the extra period.

"They've been doing that a lot this year, showing incredible composure in a crisis," Gaze said.

Sydney are finding their feet too with successive wins, including Sunday's 107-91 thumping of Brisbane.

Gaze described the first quarter as among their best spells this season.

"Hopefully it gives us some confidence for what lies ahead because we have aspirations of finishing as high as we possibly can.

"We're in a good head space now, we know we're in the finals."