The AFLW made a spectacular return with a great vibe for Geelong’s first-ever game in the competition, played in front of a partisan home crowd of 18,429 and producing a thrilling finish with the home team getting up.

The ‘Car Park Full’ sign was up half an hour before the game at the city end, and while the top decks of the Hickey Stand and the Players Stand were not opened and the seats were thinly-populated on the eastern side, it was a good turn-out.

Geelong will be highly competitive in their first season at this level, quite clearly, with captain Melissa Hickey still to return from injury. 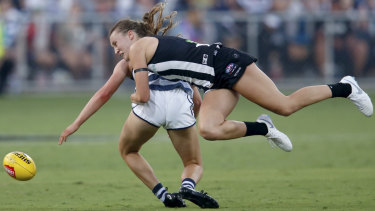 In hot conditions the players were exhausted at the end, and Geelong won by a point on the back of a set shot from No. 1 draft pick Nina Morrison at the 12-minute mark of the final quarter that hit the goal post from 20 metres out.

For the next five minutes Geelong’s players defended grimly with no one in their forward half.

Ultimately, it was enough for a victory that goes into the annals.

Sharni Layton played ruck for Collingwood after more than a decade as a national team and national league netballer, and it was a difficult night for her.

Layton started out conceding a 50-metre penalty for encroaching into the restricted zone while Geelong’s Madeline Boyd was about to take a free kick; Boyd ended up having a shot from point-blank range.

In the second quarter Layton’s stray arm to the head of her teammate Sophie Alexander in a contest knocked her out, and she was stretchered from the field.

Layton has the size to be a force but obviously needs more time to adapt to the game.

It was immediately obvious that 18-year-old Nina Morrison would be a star in this competition. Within five minutes of the opening she had touched the ball a handful of times, seven times in the first quarter alone and ultimately, 22 times for the game to go with eight tackles.

She also kicked the winning score deep in the final quarter. 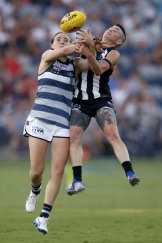 Denny Taylor of Geelong and Celia McIntosh of Collingwood battle it out.Credit:Darrian Traynor

“At the time I was hoping for the goal, but the point was enough in the end,” she said.

Morrison is a local who was in Geelong’s TAC Cup premiership team last year and a member of the Geelong team that played off in the VFLW grand final, and she acknowledged that closeness was a big part of the club’s win.

“We’re a really united group and we spoke about that before the game, ‘try to stay connected and keep our brand of footy’,” she said. “Being able to come out there and play with some of the girls I’ve come all the way through junior footy with is pretty special.”

Jaimee Lambert’s third-quarter goal for Collingwood came only a few minutes after she had appeared to suffer a bad knee injury in a heavy collision.

But not only did she come back on the ground, Lambert hit up Sarah D’Arcy with a short pass, ran on for the give-and-go play, and from 40 metres out under extreme pressure, threaded through a Daicosian dribbler. It put the Magpies back in front in what was a titanic struggle all night.

The adjusted boundary throw-ins certainly opened up the game and the restricted positioning at centre bounces had an impact, too. But the controversial change to the assessment of 50-metre penalties hardly came into play. 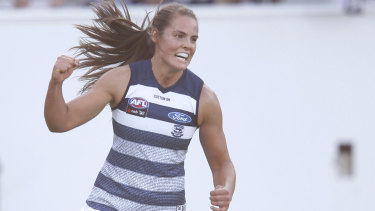 Geelong coach Paul Hood was delighted to see a team that has graduated from the VFLW be so competitive. “It’s such a great breeding ground,’’ he said.

But moreover he knew his team had created a little slice of history, with board members and men’s team members among those celebrating in the rooms.

“To be honest I was pretty blown away when I looked back at the crowd after the game and saw those scenes, all the people that had hung about, the young boys and girls getting signatures. That was pretty cool.”