World champions Germany survived a late scare to see off Saudi Arabia 2-1 on Friday and claim a first victory this year, putting a five-game winless run behind them as they finalised their World Cup preparations.

There were also wins for Iran, Croatia and Switzerland, while Poland were held to a 2-2 draw by Chile. 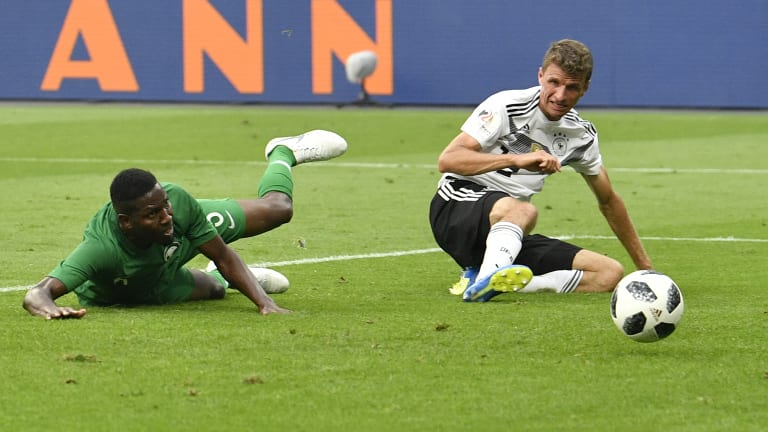 Germany looked to be heading for a comfortable win as they sought to put their worst run of form for 30 years behind them as Timo Werner opened the scoring and Omar Hawsawi’s own goal doubled their lead on the stroke of halftime.

Yet Saudi Arabia, who will also be in Russia, fought back, looking particularly dangerous on the counter.

They grabbed a lifeline as Taisir Al-Jassim smashed in the rebound after a Mohammad Al-Sahlawi penalty was saved by Marc-Andre ter Stegen five minutes from fulltime.

Al-Sahlawi then had strong claims for a second spot kick waved away in stoppage time as he went down under a challenge from Mats Hummels as Germany hung on to claim a morale-boosting victory.

There was frustration for Germany coach Joachim Low, as Ilkay Gundogan’s every touch was booed for the second game in a row. German fans are angry over a picture he took with Turkish president Tayyip Erdogan last month, addressing him in a message as "my president".

“He’s a member of the national team and that (booing) does not help anyone,” said an irritated Low.

The coach went on to voice his discontent at his side’s performance, but was adamant they will ready when they face Mexico in their opening World Cup game next Sunday.

“Today we missed a lot of chances, were really open in defence and allowed too many counter attacks from Saudi Arabia. In the end we were lucky to win," he said. “I'm not worried because I know we’re going to keep on improving. When it gets going, we’ll be ready. Next week we’ll be sharper, more dynamic and have even more power.”

Croatia battled back from an Ismaila Sarr opener to defeat Senegal 2-1 thanks to second-half goals from Ivan Perisic and Andrej Kramaric and Switzerland continued their impressive form with a 2-0 win over Japan.

Iran scored a late winner to defeat Lithuania 1-0, while Poland blew a 2-0 lead to draw 2-2 with Chile, who did not qualify for Russia.