EAST RUTHERFORD, N.J. — Crazy as it may sound, the Giants are starting to believe they have a chance to make a run at the playoffs.

It’s amazing what a couple of wins can do for a team after a 1-7 start.

Saquon Barkley ran for a career-high 142 yards and scored three touchdowns as the Giants held off the Tampa Bay Buccaneers, 38-35, on Sunday at MetLife Stadium to win consecutive games for the first time since December 2016.

“I think there is some excitement going around,” said Eli Manning, who hit 17 of 18 passes for 231 yards and two touchdowns. “It is good. It is a good feeling to have in the locker room and you see some growth. You see the improvement.”

What the Giants (3-7) are doing is making plays and finishing. The running game has picked up, opening up the passing game, and the defense is forcing turnovers. The group intercepted four passes in sending the Bucs (3-7) to their fourth straight loss. Linebacker Alec Ogletree returned one interception 15 yards for a touchdown. 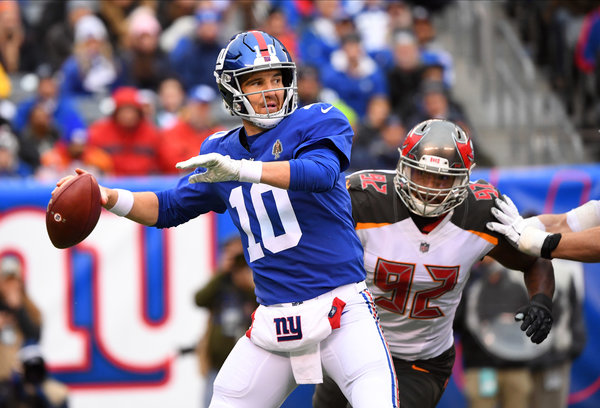 “I just know that we’re playing better and I just love to see these guys in here after the game with smiles on their faces,” said receiver Odell Beckham Jr., who caught an 8-yard touchdown pass. “We just put it all together, so it’s always a lot more fun when you win.”

Playing in the N.F.C. East also helps bolster the Giants’ belief that their postseason hopes are not dead. Washington, which fell to Houston and lost quarterback Alex Smith for the season to a broken leg, leads the division with a 6-4 record. No other team has a winning record.

“We’ve got a long way to go, there are a lot of things we’ve got to get better at, but if we can just keep battling and fighting, who knows?” Giants Coach Pat Shurmur said. “That would be a fun thing for everybody to write about.”

The Giants never trailed as Manning found an open Barkley on a 6-yard touchdown pass on the opening series, and then Barkley, the No. 2 overall pick in the draft, scored from 5 yards out on the second possession to make it 14-0.

“We’re finishing games and we’re finishing drives, and that’s what we weren’t doing in the first half of the season,” Barkley said of his first winning streak as a professional.

Through two quarters, Tampa Bay had been limited to one score, on a 1-yard fourth-down sneak by the starting quarterback Ryan Fitzpatrick, who threw three interceptions. But the Buccaneers, trailing by 24-7, made things interesting after Jameis Winston replaced Fitzpatrick and led four touchdown drives.

Receiver Mike Evans recovered a fumble in the end zone late in the third quarter to start the comeback. In the fourth, Peyton Barber ran in from 5 yards out and Adam Humphries caught an 8-yard touchdown pass to make it 31-28.

Manning responded, connecting with tight end Evan Engram on a 54-yard pass and run on the second play after the ensuing kickoff, and Barkley capped the drive with a 2-yard run with 3 minutes 52 seconds remaining.

The Buccaneers got the ball back at their 20 with 23 seconds left, but B. W. Webb intercepted Winston’s long throw down the sideline to ice the win.

“It hurts me when I have to see my team lose a game because I turned the ball over,” said Winston, who finished 12 of 16 for 199 yards and two touchdowns. “And I’m sure it hurts Fitz. And I’m sure it hurts anyone that has a hand in what they believe led the other team to winning. That’s our main focus. We have to find a way to win.”

Jason Pierre-Paul, the Giants’ first-round draft pick in 2010, returned to face his old team for the first time since being traded in the spring. He had 1½ of the Bucs’ four sacks. He helped Eli Manning up after the first sack. “I just said to him, ‘Get up, stop falling,’ but no, I was just helping him up because that used to be my old teammate and I’m not trying to hurt him,” Pierre-Paul said. “I’m just trying to play football and have good sportsmanship.”