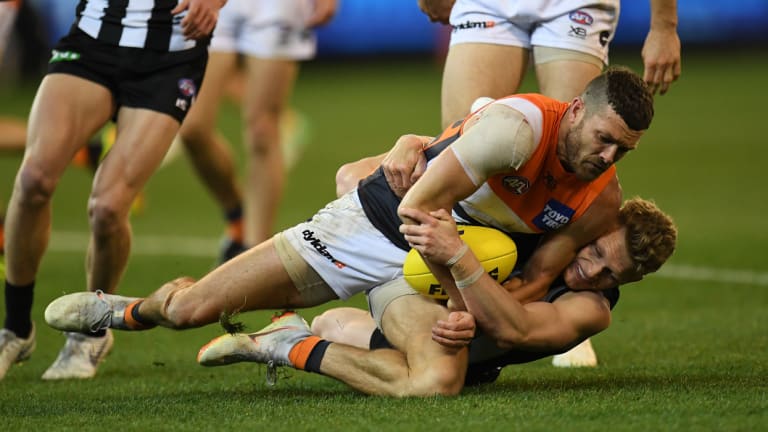 Sam Reid of the Giants is tackled by Adam Treloar

When the Giants came into the competition, there was a fear the AFL had set them up for a dynasty. Seven seasons in and the raft of premierships supposedly heading out to western Sydney has not come.

And it won’t for at least another year after the Giants were knocked out of the flag race by Collingwood, who sent nearly all the 72,504 fans home from the MCG in delight with a 10-point win.

For all the resilience and perseverance the Giants have shown all campaign, this was a season of regression. Knocked out in the preliminary final the last two years, the Giants fell at the semi-final stage.

Injuries may be a mitigating factor but the Magpies are one team that has also had a crowded casualty ward.

The Giants paid the price for terrible first quarter in which they gave up a 22-point start. They hit the front briefly in the third term only for the Pies to sprint away with a rush of four goals to start the last quarter. They were pulling ground on the line but ran out of time. 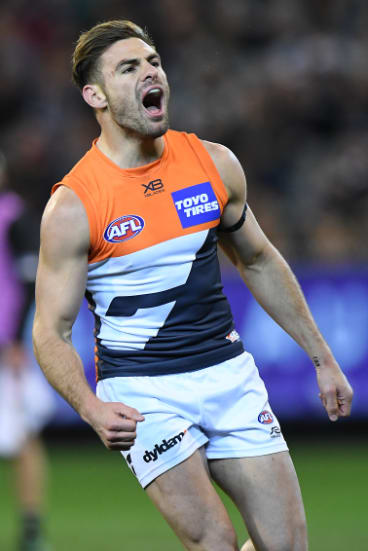 The Giants will take plenty away from the season but this was an opportunity lost. The bulk of their squad may yet be entering their prime but there are no guarantees in football. Players leave, others get injured and the game does not wait.

This is on paper a star-studded list but talent only gets so far in this competition. When the big moments came in the game, the Pies took them – though they took their sweet time.

The Giants had gilt-edged chances in the last term but could not convert. Jeremy Cameron, Harry Himmelberg and Stephen Coniglio will all wish they could have their time again near goal.

Coniglio, it must be said, had been huge. He was their best midfielder, complementing his 30 possessions with two goals. Lachie Whitfield, another high draft pick, was the Giants’ best. He stopped goals and set up forward thrusts.

But if the Giants are to claim the ultimate prize they cannot rely purely on their top end. Too many of them had their colours lowered, none more so than Toby Greene, best on ground last week but held goalless with only nine touches this week. Seven Giants finished with fewer than 10 touches. The Magpies had more contributors.

The best that could be said in a lop-sided opening term for the Giants was they had not been swept away. The Magpies were surging, the Giants desperately laying sandbags. Their hack kicks forward rebounded off a black and white wall, often with interest.

On the rare occasions they were able to get possession in space they sat speculative long balls on the heads of undersized targets. Half their side had two or fewer possessions in the quarter, including Greene, who was finding his second week back more trying.

Whereas the MCG looked small when the Giants had the ball, space opened up when the Pies were in possession as they ran harder and created more gaps. Their problem was a lack of polish and composure around goal.

The Giants’ lift in intensity was evident from the opening passage of play in the second quarter, not just in their attack at the contest but also movement of the ball.

The game was on and tempers set off. Taylor Adams lashed out at Greene, which fortunately for both had minimal impact. His tongue lashing of Rory Lobb, who had spilt a mark which gave Jordan De Goey a buzzer-beating goal, was more costly. A half-time melee ensued which is set to leave several players lighter in the pocket. 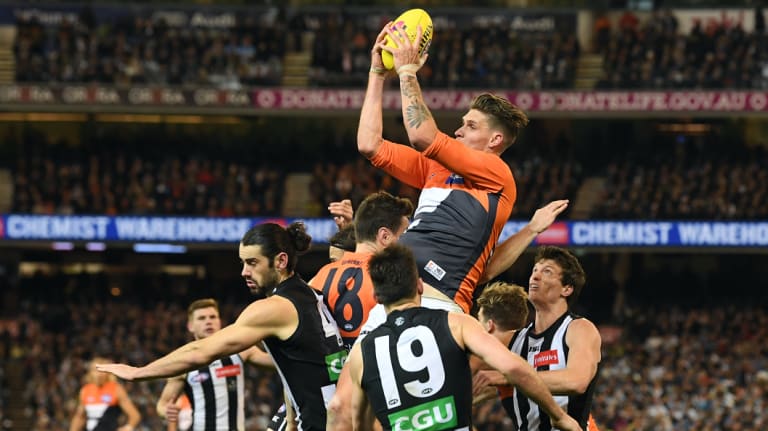 Rory Lobb rises over the pack.

Once the red mist settled, the Giants would have seen they were back in the game thanks to the industry of Stephen Coniglio and Jacob Hopper in the middle, and Zac Williams and Lachie Whitfield across half-back.

They drew level through Coniglio, who threaded one from the boundary, then drew stunned silence when Jeremy Cameron snapped truly from a mad goalmouth scramble.

The roars of the Black and White Army were now groans of frustration. The Giants were having their best period of the game, making the Pies come to them.

Against the flow, the Pies found goals through De Goey and Brody Mihocek but Zac Langdon’s long-range shot ensured a last quarter with everything to play for.