Greater Western Sydney are stamping themselves as legitimate premiership contenders after continuing their surge to September by disposing of a wasteful St Kilda.

The Giants still have work to do to book a third straight finals campaign but the more pertinent question is not if they will get there but how much closer they can get to pole position. 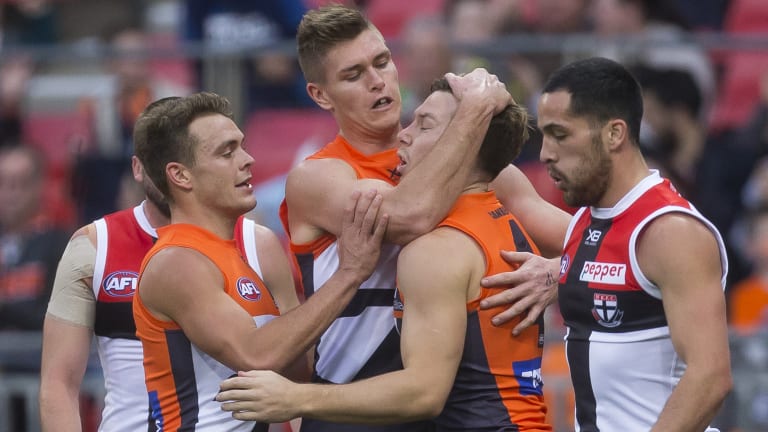 On the march: The Giants celebrate a goal to Rory Lobb at Spotless Stadium.

A speck in Richmond's rearview mirror two months ago, the Giants loom as a major threat to the reigning premiers' bid for back-to-back flags.

They had to work harder than many expected for their 25-point win but the reward was well worth the toil. If the Western Bulldogs can upset Port Adelaide on Sunday, the Giants will finish the round in the top four.

They will be strengthened next week by the return of spearhead Jeremy Cameron, who has completed his five-game suspension.

As far as auditions go, this was not the Giants' best effort but after stuttering through their opening lines they warmed to the role, though they will need to improve for a part on Broadway.

This was a match they probably would have mucked up during their form slump in May.

Himmelberg has stepped up to the plate in the absence of Cameron and Jonathon Patton. This time he bagged four goals, impressing with his purposeful leads and sticky hands. 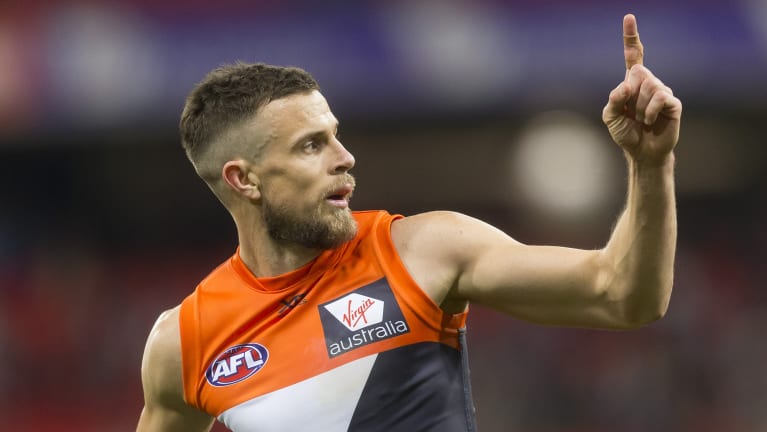 The Saints will be ruing their wastefulness in the first half when they controlled play but could not transfer their supremacy where it mattered – on the scoreboard.

Jade Gresham is giving Saints hope in a dark season, captain Jarryn Geary was solid across half-back while Jack Steele limited Callan Ward to 20 disposals in a fine tagging performance.

Tim Membrey and Jack Lonie threw away chances to make match-defining contributions with their jitters in front of goal.

They were still in the game midway in the last term but lacked the polish to make the Giants edgy. Their lack of A-graders was again evident, particularly when the Giants made their charge after half time.

The Saints began with the intensity that had characterised the Giants' past two months. They were resembling the team fighting for a berth in the top eight while their more fancied opponent were playing as if the talent gap alone would get the job done against the 15th-ranked team.

Goals were hard to come by for both sides but for different reasons. The Giants could not get the ball forward often enough, while the Saints, as has been their way this year, butchered numerous opportunities. At half-time they had just three goals from 40 entries inside 50.

Their delivery to their forwards also left much to be desired. Take Blake Acres' 30-metre chip to find Tim Membrey which went out on the full, though he was not on his own.

Otherwise, they had good reasons for optimism. Key playmakers Ward, in his 150th game for the Giants, and Dylan Shiel were quiet while Toby Greene did not touch the ball until the second term. 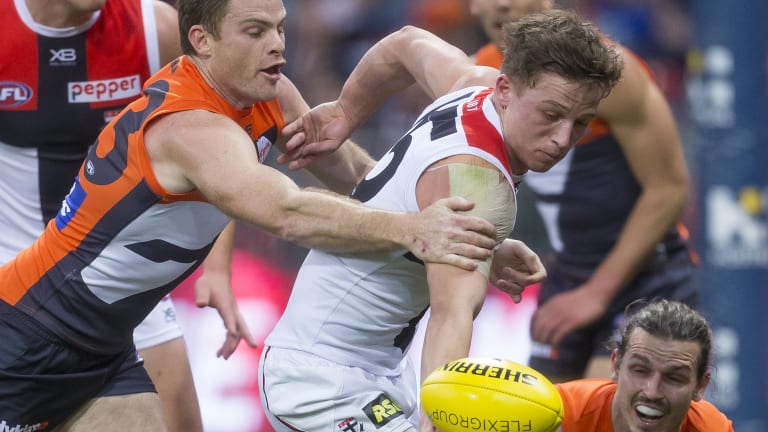 There was little fluency in the Giants' game but they capitalised on half chances and gifts like Jake Carlisle's undisciplined free kick on Brent Daniels.

The complexion of the game changed dramatically early in the third quarter. In the space of five minutes, the Giants went bang, bang, bang, which must have been deflating for the Saints, who had taken a half of dominance for the same return.