Daryl Gibson contacted SANZAAR referees boss Lyndon Bray in the wake of the Waratahs loss to the Crusaders but says he lays no blame on the man with the whistle and that his side need to turn close losses against New Zealand teams into season-defining wins.

Kiwi referee Ben O’Keeffe didn’t have his best game on Saturday in a match where the Waratahs were steam-rolled by the Crusaders despite leading 29-0 after as many minutes. 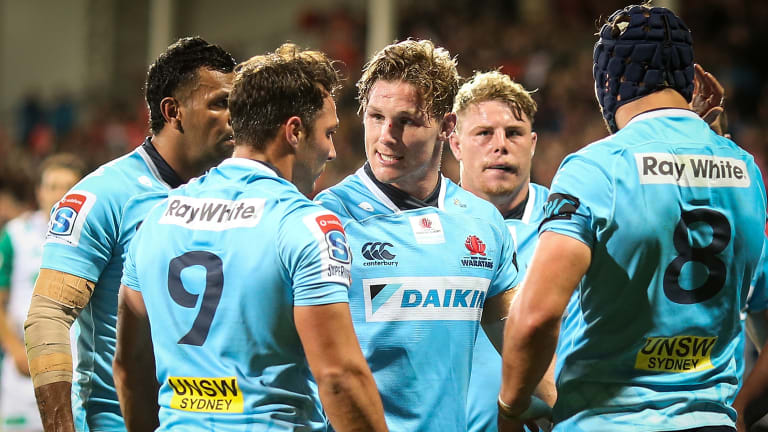 Dejected: Michael Hooper of the Waratahs (centre) speaks to his teammates.

A blatant elbow to the jaw from Joe Moody on Kurtley Beale was missed completely; an offence that resulted in the All Blacks prop being suspended for two weeks.

SANZAAR has appointed Kiwi referee Brendon Pickerill for the Waratahs and Highlanders match in Sydney on Saturday despite calls for neutral referees to officiate games where a conflict of interest could arise.

Gibson said there had been excellent transparency between SANZAAR and the Waratahs in light of some contentious refereeing decisions in Christchurch.

“We’ve had really positive correspondence with the referees boss Lyndon [Bray] and the referee himself. I’m really happy with that process,” Gibson said. “We certainly don’t blame the referee for anything that went on in the game. We’re still kicking ourselves. We felt with better control of the game we should have come out with a better result.

“There’s lots of transparency between the referees and the head coaches and I’ve got no issue with that.”

The Waratahs have dusted themselves off for yet another gruelling encounter, this time against the Highlanders.

The third-ranked Kiwi team is coming off a 39-27 victory over the Lions but were were thumped by 26 points a week earlier by the Sharks.

As for NSW, they have come within a whisker of knocking off the Blues and Crusaders in a clear sign they are Australia's best-performing Super Rugby team.

While the Waratahs can take confidence out of giving Kiwi teams a run for their money, Gibson said now was the time to kick on and get a win.

Gibson expects the Highlanders, who have won their last four matches against the Waratahs, to be a different proposition to the Crusaders.

“They play the game a little bit differently with their attacking kicks,” Gibson said. “They’re really going to probe, really look for spaces and use that kicking assault as a tactical weapon.

“If you give them too much time and space, they’ll take that and potentially hurt you.”