BALTIMORE — Wearing his catcher’s gear, Gary Sanchez found Gleyber Torres sitting on the bench in the visitor’s dugout in the sixth inning and wrapped him in a bear hug. Torres deserved it: his second home run on Thursday, one of his career-high four hits, gave the bruised Yankees a much-needed lead in a 8-4 victory over the Baltimore Orioles.

Before the game, the Yankees, one of the preseason World Series favorites, placed their major league-leading 11th player on the injured list. With Troy Tulowitzki missing an undisclosed amount of time with a mild left calf strain, Torres is now the Yankees’ primary shortstop option.

To make matters worse, the Yankees lost four times during their season-opening homestand against the lowly Detroit Tigers and Orioles, and their offense had replaced home runs with strikeouts. In an inauspicious first inning of the Orioles’ home opener on Thursday, it didn’t appear the Yankees (3-4) were going to reverse course.

Aaron Judge was thrown out trying to steal second base soon after Luke Voit, who was once ahead 3-0 in the at-bat, struck out against Alex Cobb, the Orioles’ starting pitcher. Much like their first week, the Yankees had squandered a potentially fruitful scoring chance.

It got worse. Two pitches into his start, the Yankees’ starting pitcher James Paxton coughed up a solo blast to the Orioles second baseman Jonathan Villar. That was just the beginning for Paxton’s rough first frame. He struggled to find the strike zone and soon had the bases loaded following a single and two walks.

Facing Joey Rickard, Paxton was called for a balk, which scored a run. Then came the wild pitch in the dirt that bounced past Sanchez, scoring yet another run and giving the Orioles a 3-0 lead. 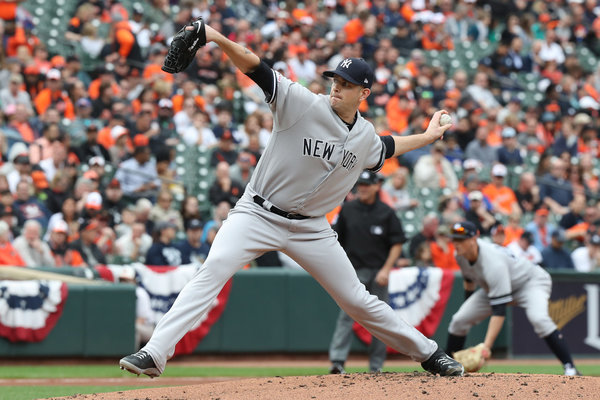 As relief pitcher Stephen Tarpley warmed in the bullpen, Paxton escaped the inning with strikeouts of Rickard and Chris Davis, but he had needed 32 pitches in all.

Somehow, Paxton settled down enough to last five and one-third innings while allowing four runs and striking out nine. And the Yankees’ bullpen pitched in and out of trouble to keep the final four frames scoreless.

But the real heroes for the Yankees were Sanchez, 26, and notably Torres, 22, for rescuing them from what would have been another confounding loss to the Orioles.

Torres’s first home run of the season came in the third inning when the Yankees trailed 3-0. Sanchez, who has been shaky on defense to start this season, smashed his third blast of the season in the sixth to bring the Yankees within two runs.

Torres then did the heavier lifting. With Greg Bird and D.J. LeMahieu on base, Orioles relief pitcher Mike Wright decided to throw Torres a second straight high fastball. Torres swung through the first one but didn’t miss the encore.

Orioles catcher Jesus Sucre looked away in disgust at the mistake as Torres rounded the bases. His three-run shot into the left field seats gave the Yankees the margin they needed to pull out a victory.

It was Torres’s first two-home run game since Aug. 1 of last season when he clobbered home runs, believe it or not, off the exact same pitchers he bested on Thursday: Cobb and Wright.

Torres added one more hit before the game was over. So did Voit, whose three-run home run in the ninth inning gave the Yankees more breathing room. But to get there, Torres had deservedly earned his teammate’s praise.