Maori Time will have to use her outstanding gate speed in her heat if she is to become the first Australasian horse since Pride Of Petite to qualify for the Elitloppet Final in Sweden on Sunday.

The draw didn't do the Australian mile record holder any favours as she came up with gate six in the first of two heats. Driver Todd McCarthy is likely to set her alight off the gate. 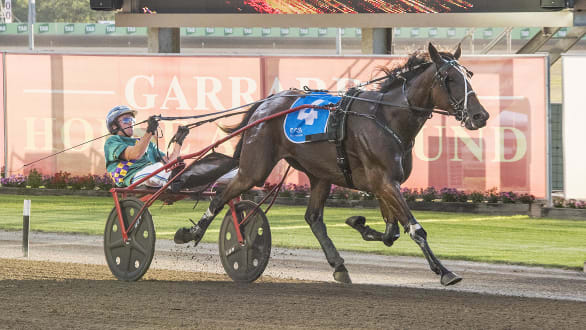 Speed to burn: Maori Time will be set alight off the gate in the Elitloppet.

“It’s hard to sort of get a gauge on how quick you think they are. I know how fast she is,” McCarthy told trots.com.au.

“I did quite a bit of form on all the horses in both heats. I’m going to have to have a chat with [trainer] Brent [Lilley[ and owner Fred [Crews] and see what they want to do and go from there.

“But I’m tipping that they’ll want to see her buzz off the arm and try and find a pretty handy spot early.

“That’s her racing style and that’s probably how she got invited to that race, racing that way, so I’m pretty sure they’d want to keep consistent in that matter and make sure we’re not going home wondering.”

Maori Time will take the French champion Bold Eagle, which ran a  1:50 mile in the heat last year but was beaten in the final, in her heat and if she doesn’t win the heat hope to run a time to qualify for the final, which takes place a couple of hours after the heats.

“I know there’s some good ones there. He’s obviously the standout but, at the same time, I think this year that they will probably be more focused on just qualifying him without emptying him out,” McCarthy said.

“It probably gives us an opportunity to maybe take advantage of that and try and get a handy spot to get into the final.

“Hopefully she’s on her A-game, and we’ll be having a bit of fun anyway.”