Alex Ovechkin is so good he scored Sunday’s winning shootout goal without putting the puck in the net.

Ovechkin finished Washington’s fourth straight victory with an unusual play, and Braden Holtby made 22 saves in the Capitals’ 3-2 victory over the Rangers at Madison Square Garden.

The 33-year-old Ovechkin was skating to his right in the fourth round of the tiebreaker when Rangers goalie Alexandar Georgiev threw his stick at the puck, knocking it away. Ovechkin was credited with the goal after a review.

“I know 100 percent it’s a goal,” Ovechkin said. “I was surprised of the first reaction of the referees. It was nice we have replay.”

Carl Hagelin and Andre Burakovsky scored in the first period for Washington, which broke a tie with the Islanders for first place in the Metropolitan Division. The Islanders later lost to the Philadelphia Flyers, 4-1.

Capitals forward T. J. Oshie, no stranger to shootout success, especially in the Olympics, was surprised by the ending.

Pavel Buchnevich and Ryan Strome scored for the Rangers, who lost their fourth in a row, including all three on their homestand.

Georgiev made 37 saves, including 20 in the second period. He stopped Ovechkin on a breakaway in overtime.

“It’s tough to explain,” Georgiev said of the shootout winner. “He faked the shot, I went down. As he was moving laterally, I kind of threw my leg and the stick at the same time. It’s a tough call..”

The Rangers were behind by 2-1 before they tied it late in the second period. Anthony DeAngelo shot from the point, and Filip Chytil slipped a backhand pass while falling down to Buchnevich, who scored his 13th of the season at 14 minutes 20 seconds.

The teams played a wild 6-5 overtime game a week ago in Washington, and they got off to another fast start. Strome opened the scoring just 45 seconds into the first period when he took advantage of a turnover by Dmitry Orlov and scored his 11th of the season.

The Capitals answered quickly. Hagelin skated down the right side and attempted a backhand pass that was blocked. The puck went right back to him, and he beat Georgiev for his third of the season. It was his first goal since being acquired in a trade with Los Angeles.

Burakovsky gave the Capitals a 2-1 lead when he skated across the slot and converted on a wrist shot from the left face-off circle at 10:02 for his ninth of the season. 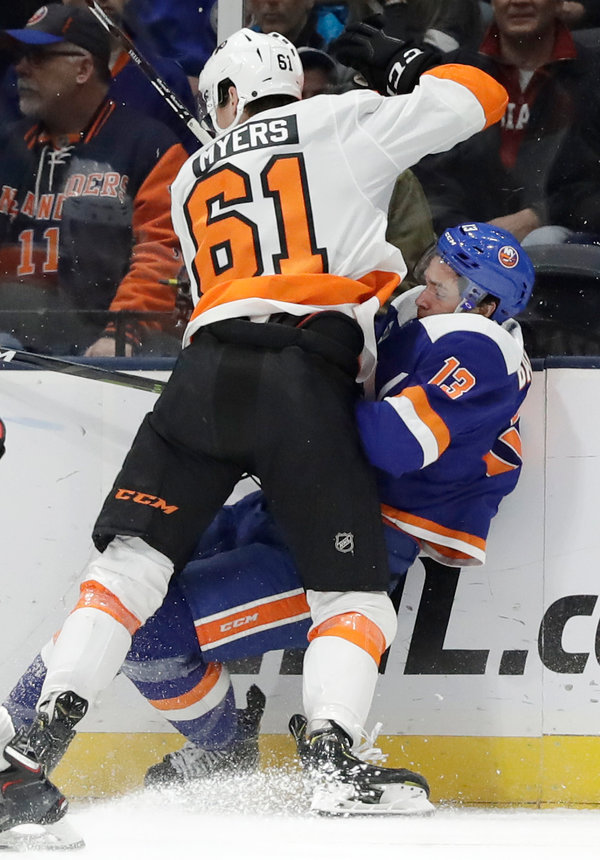 Travis Konecny, Travis Sanheim, Scott Laughton and Sean Couturier scored for the Flyers, who are 4-0-1 in their last five games and five points from a wild-card berth in the Eastern Conference.

Elliott lost his shutout when Adam Pelech scored with 4:45 left, but he got his ninth win of the season and third in his last four starts.

Robin Lehner made 10 saves in 23:18 of work before Islanders Coach Barry Trotz pulled him. Thomas Greiss made 12 saves in relief.

The Flyers jumped to a 1-0 lead 8:21 into the game. Konecny was able to drive by Islanders defender Scott Mayfield and put the puck past Lehner for his 21st goal of the season. Radko Gudas picked up his 100th career N.H.L. point with an assist on the play,

Philadelphia extended the lead to two goals when Sanheim was able to put a loose puck past Lehner with 5:01 left in the first. Sanheim’s initial shot was stopped, but the rebound sat in the slot and he was able to gain control of the puck.

Philadelphia’s Nolan Patrick left the game early in the first period with an upper-body injury and did not return. Patrick took a shot by Cal Clutterbuck off his head.