Godolphin trainer James Cummings is looking to send Impending to the breeding barn with a group 1 flourish in Queensland, starting in the Victory Stakes at Doomben on Saturday.

The son of Lonhro had his stud fee of $22,000 announced for his first season at Northwood Park in Victoria earlier this month, but Cummings thinks he can add another group 1 to the Stradbroke crown Impending won last year. 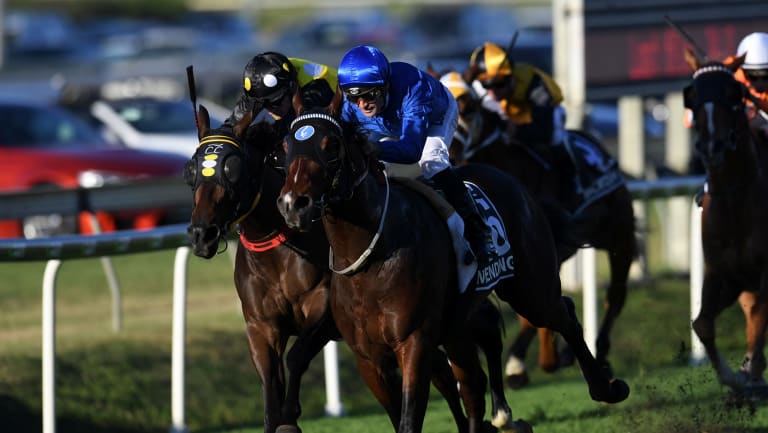 “We have deliberately held him back to have a shot at Brisbane and he has thrived because of it,” Cummings said. “He is very fit and although he hasn’t won at 1200m, his record is good over the trip in good races.

"He was third in the Darley Classic last start and before that he was runner-up to In Her Time, both at 1200m and we decided to give him one more crack at this carnival.

“We have got him ready for this race and we know it is his farewell tour. He has proven he is a weight-for-age horse and there is a good program of races for him up there.

“He will run in the Doomben 10,000 and the Kingsford-Smith Stakes and then we will decide about the Stradbroke. If he was to win one of those races his job might be done.”

Impending will start in Saturday's group 2 after he produced a rousing gallop between races at Randwick last Saturday and impressed again at Osborne Park on Tuesday morning.

“He is very forward and although his only win first-up was at 1100m, he has a solid grounding for Saturday. He has matured and has shown a lot of speed in his work,” Cummings said.

Godolphin are eying the Brisbane carnival with a big team and have also sent Marsupial north for the QTIC Plate on Saturday.

“He is one of a number of nice three-year-olds we have and will aim up the races up there,” Cummings said. “We have a few runners at Hawkesbury that could end up in Brisbane as well.”

Ghisoni will get her chance in the Godolphin Crown at Hawkesbury, a race the racing giant has won on four occasions, and it could be a stepping stone to Queensland campaign.

“She looks like she has thrived after the first up run in the Sapphire Stakes at Randwick and although she meets pretty talented mares like White Moss here second up, I think she can improve significantly enough to be very competitive in a suitable race,” Cummings said.

Meanwhile Rachel King continued her perfect record for Godolphin at Randwick on Wednesday,  despite getting held up for much of the straight, she arrived in time on Ozark to beat stablemate Malahat.

“Once he got in the clear he just let go. It is nice to make it two from two for them and hopefully they will give me a few more rides,” King said.

“He does the talking for me,” Cunningham said. “He’s a very nice horse and a pleasure to have in the stables. He speaks for himself.

“Nothing too extravagant in the plans at the moment. Sydney racing has fantastic prizemoney so probably head back to town for a Saturday, conquer that before maybe thinking about Queensland.”