March on the NSW South Coast is synonymous with stable weather, warm water and plenty of fishing options.

In fact, the biggest problem anglers have is deciding what to target, with most species on the bite. 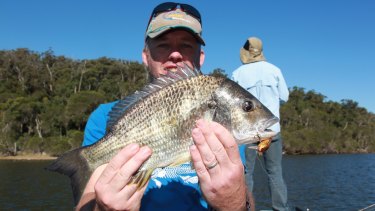 Bream, including some big bruisers, are firing up on the south coast.

After a summer in the estuaries dominated by flathead and whiting, bream are on the move in many systems.

They’re responding to a range of techniques, with surface lures getting great results over the flats, and soft plastics nabbing fish in the deeper water.

Flathead are still around in numbers. The recent flathead competition at Narooma produced lots of lizards, although the size was reportedly down on previous years, with plenty about the 40-centimetre mark and not as many genuine "crocs".

The water in most of the estuaries is very clear because of the drought. I’ve noticed that flathead are a bit more cautious about hitting lures in the clearer conditions.

Agonisingly slow retrieves are a good way to combat this. This allows the lure to sit in front of the fish’s nose for a little longer, hopefully enticing a bite.

Whiting remain abundant in the shallows. For fishos out there who, like me, are fans of the Bassday Sugapen surface lures, there’s good news.

There’s now a Sugapen Popper, which is apparently braining the whiting at the moment.

They’re also snaring their fair share of bream and flathead. I’m off to get a few as soon as I’ve finished writing this.

Salmon fishing off the rocks is highly productive at the moment. Bingi, Congo, South Head, the Moruya breakwall and South Broulee rocks have all been worth a cast.

Fish the top of the tide with whole pilchards or metal slices.

The offshore marlin bite is moving south, with the best catches reported around Eden, the Victorian border and even down as far as Lake Entrance.

On the freshwater scene, Lake Eucumbene is sitting at 26 per cent and producing a few fish for anglers spinning around the yabby beds.

As air and water temperatures cool over the next few weeks, trout will start venturing into the shallows in greater numbers, so expect the action to go up a notch.

The Canberra fishing scene is red-hot. Redfin, golden perch and Murray cod are active in Burley Griffin, Tuggeranong and Ginninderra.

Yerrabi Pond is fishing steadily for redfin and golden perch. Googong is also worth the drive, with goldens and reddies being taken from the shoreline on a range of lures.