After a week where the Demons were forced to "work on every phase" of their game, Melbourne coach Simon Goodwin has conceded that there is no reason – yet – for people to trust his football team.

The Demons were awful against Hawthorn in round four and are yet to fulfil the promise they displayed in the pre-season, when many had them finishing in the top eight and some, the top four. 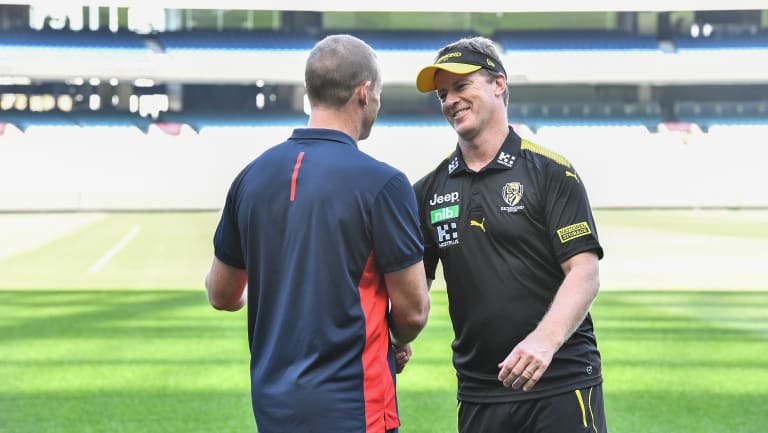 Melbourne coach Simon Goodwin and Richmond coach Damien Hardwick greet each other at the MCG on Monday.

Because of that and because of the way they finished 2017, Goodwin said there just hadn't been enough evidence for the football world to bank on Melbourne producing a consistent effort every week.

"That's the reality," Goodwin said when asked if it was a fair to suggest that Melbourne were hard to trust. "We deal in realities. People can only make judgment on what they see. We will always hold that tag until we actually do something about it consistently. That's not for one or two weeks, that's over a period of time.

"We are four weeks into a 22-week season so I think it's best judged come the end of the year." 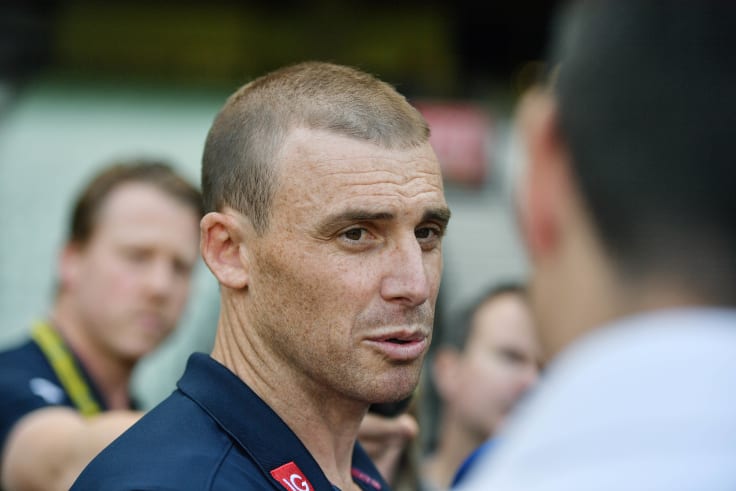 Goodwin and his Demons are under pressure.

Richmond coach Damien Hardwick said his side would be wary of the Demons. Save for round four, the Dees have been one of the most potent sides at scoring in the AFL.

"Melbourne are a high-contest, high-pressure side, as are we, so it's going to be a fierce contest regardless of last week," Hardwick said.

"We can only go on what we know and the numbers indicate it's going to be that type of contest.

"And we embrace that and accept that. We love it."

Goodwin would not say whether Nathan Jones would reprise his tagging role on Dustin Martin. Jones tagged Tom Mitchell well in round four, but Goodwin said "it's about us this week and how we go about our footy".

Martin kicked six goals in Richmond's rout of Brisbane last week, spending most of his time in the forward line. Hardwick said that wasn't a plan, and that he didn't know if the same would occur on Anzac Day eve.

"It [Martin's time forward] changes week to week," he said. "I'd love to say I have a say over it but Dusty dictates where he goes and I am happy to back him in either way. He has got an understanding of what his opponent is doing to him and where he can best get an advantage and that's why we love the great players."