Carlton coach Brendon Bolton hopes the Blues' faithful were rallied by a more resilient second half against Fremantle on a day supporters began to turn against the club in a 57-point loss.

On another dismal day for the Blues, they were held goal-less in the first half for the first time since 2009 and would finish on 6.10 (46) – their lowest score ever against the Dockers.

Their first goal finally came early in the third term, after many fans had left Etihad Stadium and turned to talkback radio to vent their anger. The official attendance was 21,430.

Bolton said he had been unaware of supporters leaving at half-time with his team trailing by 70 points but hoped they could take solace in a second half where the Blues booted six goals to the Dockers' three, avoiding a repeat of the 109-point loss to Melbourne last month.

"Hopefully, there was a change in that response at the end of the game because it easily could have got even worse than that and they held up okay in the second half. It wasn't perfect but they held up. Hopefully, our supporters can see that," he said.

The Blues have preached patience in a deep three-year rebuild which has so far seen 42 players turned over, with more to come, but the pain will continue unless they can secure established talent through the trade period. They have just the one win and, judging on what was delivered against the Dockers, may not have another before this campaign is done. They face Collingwood at the MCG next Sunday.

The Blues have been linked to several off-contract stars, including West Coast's Andrew Gaff, but they could lose skipper Marc Murphy, who reiterated on Saturday he was debating whether to re-sign. Bolton said the Blues remained committed to a rebuild which will not provide consistent improvement in terms of wins and losses. 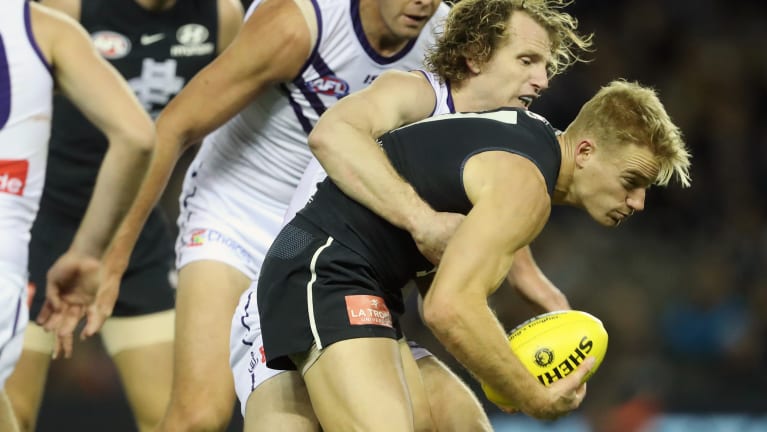 "If it was going to be linear every year … listen, we don't accept not winning, that's point one. But for it to be linear, and we have been over this before, and I can go again if you need me to, but each year we have dropped the age profile significantly to get young talent in the draft," he said.

"Forty-odd players were turned over so, in essence, this is our youngest year. We are not using it as an excuse but we went to the draft and have done that, and it's been coupled with injury to some key players. Is it difficult and challenging? Yes. But we are up for the fight and we will keep working our way through that."

Stand-in skipper Patrick Cripps had a career-high 38 disposals and veteran Kade Simpson was superb after half-time but they were given little support, particularly with the injured Murphy and Sam Docherty looking on.

"It's a work in progress. Clearly, Murph is not out there, Docherty is not out there, they are significant outs. Alex Silvagni is on our leadership group and he is not playing as well. You could say there is not enough leadership but also the way we look at it is, it's an opportunity to learn how to lead," he said.

"That will be part of the review, reflecting on when they (Dockers) did get a jump on, what did you do and why? What could you do next time? That's all part of the growth, for particularly our first-to-third-year players. We can't control that those guys are injured. You look at leadership opportunities out of it versus there is not enough out there."

Bolton spoke on Friday about the need to be more consistent through the course of matches but the Blues were poor from the opening bounce and did not really improve.

"They (Dockers) jumped us at the start – (Nat) Fyfe, (David) Mundy, (Aaron) Sandilands, (Lachie) Neale – and our response was too slow," he said.

"The game, by and large, I think they kicked 12 in the first half, was done there and it could have got really ugly. But to the players' credit, a bit of strong culture at half-time, they rallied each other and I think we may have got over the line in the second half. That could have got quite messy, so there is a little step forward for us in that.

"This group are thinking a lot on the oval at the moment around defensive action, offensive patterns, and it's just another opportunity to try and refine it and make it more automated. At the moment, it's not a habit, they are still thinking through it. That's what they have to focus on. That's what we spoke about at half-time."