Phil Gould is set to extend his stay at Penrith to beyond a decade after it emerged that the Panthers' football supremo had signed a new five-year deal with the club.

Fairfax Media understands Gould, who this week axed coach Anthony Griffin just four weeks out from the finals, recommitted his long-term future to the Panthers until the start of 2023 earlier this year. 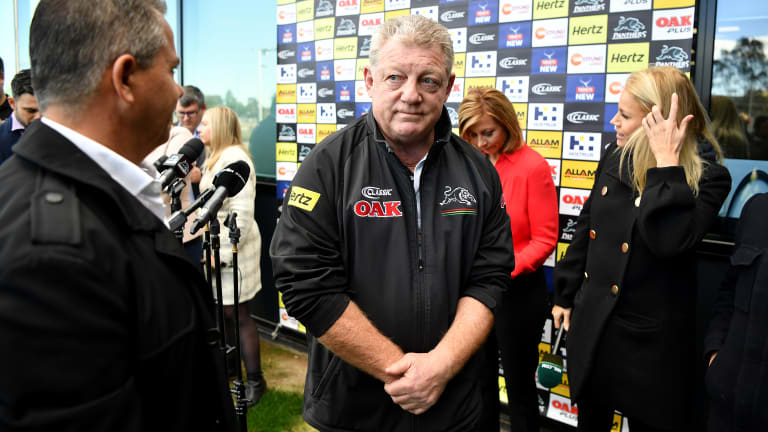 News of the new contract is the surest sign yet that Penrith see one of the game's most influential figures as a key plank in the club's future.

And it could also require Ivan Cleary to reunite with the man who sacked him should he wish to coach his son Nathan, who Panthers officials are confident will extend his stay at Penrith.

Gould has always maintained he would walk away at a moment's notice if asked, but the Panthers board have no intention of asking him to do that after signing off on the long-term contract.

Gould's previous four-year deal at the Panthers lapsed in the opening months of this year, but so determined were Penrith's board to keep him they offered their executive general manager of football a longer stay.

His contract is also a certain indication that Penrith's top brass believe Gould and Cleary snr can work together again should the coach seek a return to Penrith, three years Cleary was sacked for looking "tired" at the end of an awful 2015 season.

Wests Tigers coach Cleary, who has yet to publicly discuss his thoughts on the chances of returning to Penrith to coach his son and the Panthers from 2021, has been front and centre in the coaching rumour mill after a dramatic week.

The Panthers sounded out Cleary about a return to the club in the future, but Griffin's sacking has expedited the issue as the Tigers dig in their heels over their coach's contract, due to expire at the end of 2020.

Cleary is scheduled to front a press conference on Saturday morning before the Tigers' visit to Canberra on Sunday.

Tigers players on Friday remained upbeat about Cleary's chances of seeing out his contract with the joint venture having moulded them into finals contenders this season.

Whether coaches can be sounded out about joining rival clubs while still on contract is an issue which could be raised at a meeting of club bosses next week given there are no iron-clad restrictions on such approaches, which are in place to regulate player movement.

"I suppose if there's regulations around players not being able to negotiate until November 1 in the final year of their contract then I think it's worth looking into [the same for coaches]," Tigers veteran Chris Lawrence said.

"I think it's definitely something [that could be looked at] in the off season to have more regulation around that. Ivan's done such a great job in the 18 months he's been there. It's not ideal [if the Tigers have to find a new coach]."

Gould is expected to return to some normality after a torrid week in which he has engaged in a war of words with Griffin over the coach's axing. He will fly to the Gold Coast for Penrith's crucial match against the Titans on Saturday.

He confessed to talking caretaker coach Cameron Ciraldo out of quitting the club on two occasions over a difference of opinion with Griffin.