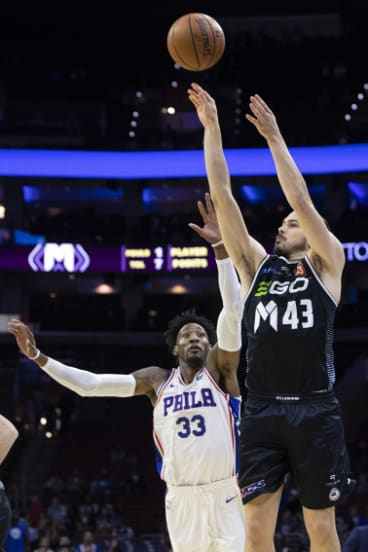 Chris Goulding had a strong start to the game.

Philadelphia: Melbourne United feared the worst when Chris Goulding went down with an injury during Saturday's pre-season clash with the Philadelphia 76ers, but the skipper will not miss any NBL regular season games.

Midway through the second term, NBA All-Star Joel Embiid flew wildly at the rim to block Goulding’s lay-up attempt and after swiping the ball away, cannoned into Goulding before landing on his floored body.

When Goulding curled into a ball and reached for his knee, everyone at Melbourne United feared a season-ending injury for the Rio Olympian and last season’s NBL grand final MVP.

In the NBA they can trade or sign a replacement player in quick time, in the eight-team NBL there are no more Chris Gouldings waiting on the free agents list.

Melbourne coach Dean Vickerman walked out onto the court to check on his captain with his heart in his mouth.

“I thought initially that it was a knee and he [Embiid] is a big boy and that’s a lot of weight coming down so the way he curled up a little bit made me think it was serious straight away,” Vickerman said.

“So I’m pleased it’s not as serious as it looked.”

Melbourne’s medical staff advised Goulding could return but would likely force his ankle to swell up and see him ruled out of next game so he opted to sit out the rest of the game.

Goulding will get treatment in the coming days as Melbourne head to New York for a training camp before their second NBA clash with Toronto Raptors on October 6 [AEST].

“It’s nothing that will keep me out of any NBL games, I’m more worried about trying to get back for our next NBA game,” Goulding said.

Goulding missed last year’s clash with Oklahoma City Thunder due to an appendicitis and made a very strong start with 13 points in 20 minutes.

Vickerman spoke to his team in front of the media after the game and told his players he was disappointed they didn’t have as much energy around their group as usual, pushing them to bring more energy into the Raptors game.

He also praised the player of centre Alex Pledger who matched Casper Ware with 19 points to lead Melbourne while Dave Barlow added 13 points.

“Alex Pledger had a hell of a game, Casper is going to do his thing and he didn’t shoot a great percentage but was always a threat and made something happen for us,” Vickerman said.

Josh Boone missed the game as expected as he continues his recovery from a hamstring injury but he completed the morning shoot-around and if he can train this week Vickerman hopes he will be cleared to play against Toronto.

NBA journeyman Cory Jefferson joined Melbourne as a replacement for Boone but Vickerman said he is unlikely to remain with the side for the Toronto game.

Roy Ward is in Philadelphia courtesy of the NBL.