Veteran Ryan Griffen has bowed out of the game with no regrets after announcing his retirement in the wake of Greater Western Sydney's semi-final exit on Saturday night.

It was a sombre Giants dressing room after their 10-point loss to Collingwood, with captain Callan Ward shedding tears as another campaign finished without the ultimate prize. 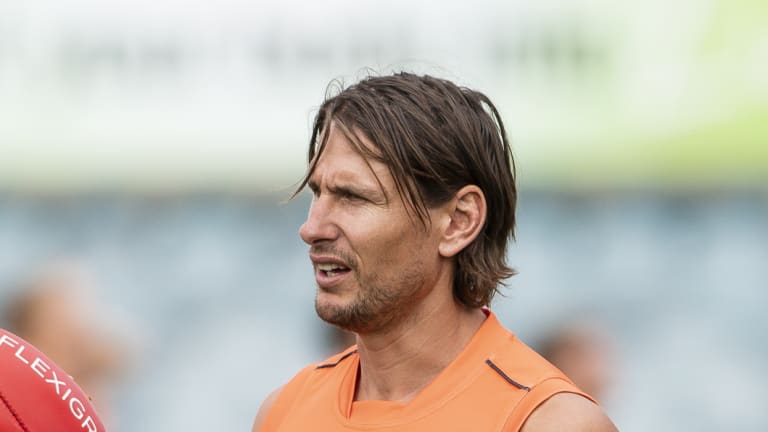 Ryan Griffen announced his retirement after the Giants’ semi-final loss to Collingwood.

The Giants are likely to be central players in next month's trade and free agency period with the future of several stars up in the air.

Dylan Shiel, Tom Scully, Rory Lobb and youngster Will Setterfield are among those likely to be targeted by rival clubs.

Griffen is the first out the door, hanging the boots up after a 257-game career with the Western Bulldogs and the Giants. He won two best and fairests at the Bulldogs and was an All-Australian in 2013.

One of the most exciting midfielders in his prime, Griffen was slowed down by injury at the Giants and showed only glimpses of his best in orange after his shock move north at the end of 2014.

Griffen was the Bulldogs' captain when he left needing a fresh start, missing the 2016 flag when his old club famously broke a 62-year drought. He played 55 games with the Giants, including three finals – one of which was a preliminary-final loss to the Dogs.

Several former Bulldogs were in the rooms for Griffen's farewell, including Will Minson.

"I don't have any regrets. That time in my career I had fallen out of love with the game. I needed a change, that was to move clubs," Griffen said.

"I knew they [the Bulldogs] had talent, I was really close with all the Bulldogs boys. It's a fantastic club, it's a club I played with for 10 years. I still love the Western Bulldogs and the way I went about it. I had close relationships there, I'm happy when they won the flag.

"It's going to be a dampener I didn't win a flag but it's more than that. We all want to win premierships and we haven't been able to do that, but I've built relationships that will last a lifetime.

"I have relationships with Jeremy Cameron, Dawson Simpson, these will last forever and it's special. I'm proud of my career, it's hard to play at this level and I played for 14 years. I think I can hold my head up high with what I've done."

Griffen was given the honour of leading the Giants off the field and later told teammates they were close to a flag.

"There's so much belief in this group, they showed so much resilience the last three years with the injuries we've had," Griffen said.

"They're a really close group, they're not far away. They're doing the right things. I said to them success is just around the corner. I think they know that and they'll get back to work.

"They have a lot of care for each other which is great, it's only going to build next year."

Griffen, 32, who had been been in talks with coach Leon Cameron during the year about his future, said he knew the time was right to leave.

"Just everything. Not so much the age, mentally. The game got to me, I am slowing down a bit, these younger kids that are playing are fitter, stronger and faster," Griffen said.

"It gets harder. I was thinking in my mind I knew this year would be my last."

Cameron, who has known Griffen throughout his career through their days at the Bulldogs, paid tribute to the retiring star.

"On the field he will be looked upon as a fantastic player at the Bulldogs, he probably didn't reach those heights at the Giants but what he did off the field was teach our young players what AFL footy's about," Cameron said.

"He's been terrific, disappointing to go out this way but he's had a fantastic career."

Griffen is unsure what his future holds.

"I think I'm going to head off into the sunset," Griffen said. "I need 12 months off to relax, do a bit of travelling."