Surgery has finally been booked for Test winger Josh Mansour. Now Penrith coach Anthony Griffin wants his side to "move on" from the injury drama as they look to bounce back in Friday night's NRL clash with Canterbury.

Griffin looked a relieved man after confirming Mansour would go under the knife on Friday morning, two weeks after suffering a horror facial injury in their round six win over Gold Coast Titans. 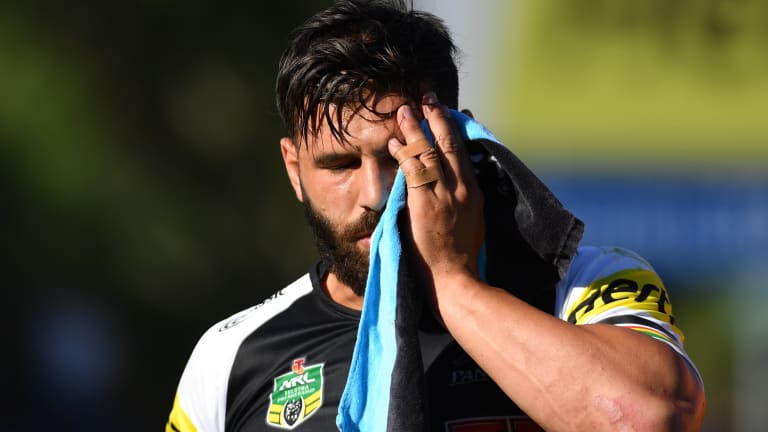 The Panthers mentor admitted it had been a frustrating wait for Mansour's swelling to subside before booking the required specialists for the complex facial surgery, but hoped everyone could now put it behind them.

"It's finally going to happen. It has been a frustrating couple of weeks for him but it's fairly extensive surgery," Griffin said. "He's been pretty good. Last time I spoke to him was earlier in the week and he has sort of got his head around it and he's more looking forward to getting the surgery done. It would be good for everyone just to move on now and get him on his way to recovery."

Griffin said they didn't need any more distractions after the Panthers' three- game winning run was snapped by last round's 26-22 loss to Cronulla. The fourth placed Panthers (5-2 record) line up against a Bulldogs outfit that inflicted the only other loss Penrith have suffered this season – a 20-18 round three defeat when playmaker Nathan Cleary went down with a serious knee injury.

While Cleary is still out aiming for a round 11 return, Bulldogs prop Aaron Woods said Penrith still had more than enough strikepower with Panthers' James Maloney at halfback.

"He has been the best player in the competition," Woods told Sky Sports Radio. "Everyone thought Penrith might lose something losing Cleary early on but he (Maloney) has gone from strength to strength. He is a calm and composed footballer. If we can stop their forwards and limit touches Maloney has on the ball it will go a long way to us getting a win."

The third-last Bulldogs (2-5 record) copped flack for not registering a point in their last round 6-0 loss to Sydney Roosters but Griffin was more worried than encouraged by what he saw from Canterbury.

"I know the game copped criticism but I thought it was a tough game and I thought it was the best defensive performance I have seen from the Roosters," he said. "And the Bulldogs were the Bulldogs – a real tough, uncompromising team. They built a history out of that. It doesn't bother them if it's 6-0 or whatever, they just keep going – I expect them to be more of the same on Friday night."