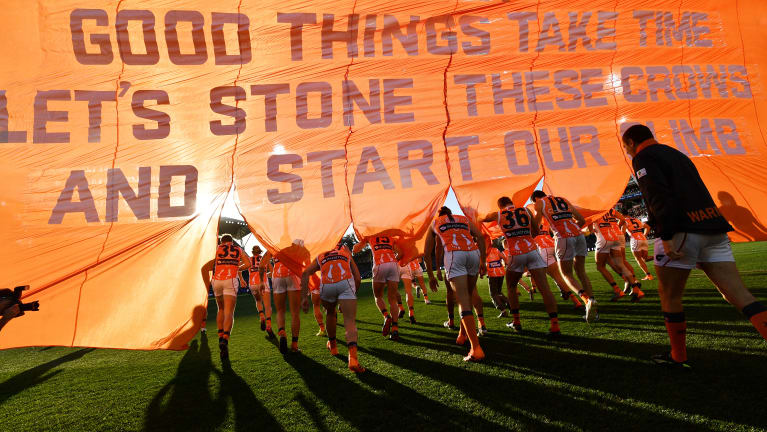 On message: GWS players run through the banner to start their round 11 clash against Adelaide.

Summer expectations: There was a widespread belief that the Giants, with consecutive preliminary finals under their belts, would be among the premiership contenders in 2018. Despite trading away some quality running players over the off-season, GWS looked to have enough quality on every line to finish the season in the top four. 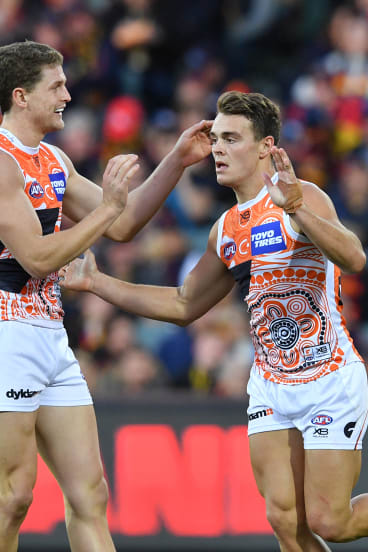 Zac Langdon (right) celebrates one of his 12 goals this season, with teammate Jacob Hopper.

The story so far: The Giants got off to a solid start, winning three of their first four matches, before a few wobbles: drawing against St Kilda, getting flogged at Geelong and dropping a home game against Essendon. The greatest concern is they have again struggled with injury – not just the quantity of games missed but the quality of players missing. After losing gun running defender Zac Williams to pre-season Achilles surgery, they have managed only a combined 17 games from game-breakers Tom Scully (1) Toby Greene (3), Brett Deledio (6) and Josh Kelly (7). The injuries have exposed a lack of depth on the GWS list, and the certain loss of key forward Jeremy Cameron to suspension and ruck/forward Rory Lobb to a back injury will further test Leon Cameron’s ability to shuffle his chess pieces around.

The surprise: Apprentice electrician Zac Langdon was plucked from the WAFL with pick 56 last November, a mature-age selection at age 22. The livewire small forward missed a couple of early games with a broken hand, but has contributed 12 goals from 10 appearances and some excellent forward pressure to average 4.6 tackles per game.

What's ahead: Saturday’s home game against Hawthorn is the first test in a season-defining month for the Giants, followed by West Coast (away), Richmond (home) and Port Adelaide (away). If they can break even they have a chance of regaining some good players and building towards September with some momentum.