GWS and Richmond were both underwhelmed by some critical umpiring decisions on Saturday night, with Damien Hardwick quipping his club will now do some "ducking practice".

The Giants pipped the Tigers by two points at Spotless Stadium, with the margin giving both teams plenty of fodder to wonder "what if" had a couple of contentious calls gone their way. 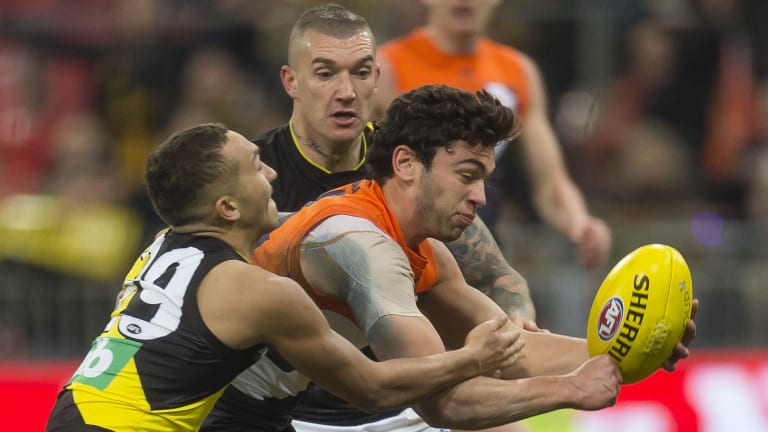 Both Leon Cameron and Damien Hardwick were underwhelmed by umpiring decisions on Saturday night.

GWS coach Leon Cameron indicated his club will contact the the league's umpiring department on Monday, seeking clarification on a number of calls.

Many pundits commented on how the whistle-blowers' interpretation of holding the ball at Spotless seemed different to what it has been for most of the year.

Tigers coach Hardwick and counterpart Cameron both aired some grievances in their post-match press conferences.

"I can't really comment on the umpiring, but it would be fair to say that we're going to do a bit of ducking practice at training," Hardwick joked.

"The game is incredibly hard to umpire.

"It's tough. They get a lot right, sometimes they get some wrong. That's life.

"I don't think the game was dominated by umpiring tonight."

Hardwick wouldn't elaborate on his comments, but was presumably unhappy with a decision to penalise Nick Vlastuin that led to Toby Greene's first goal of the night.

Cameron, who noted his club had a "really good relationship" with the league's umpiring department, is keen to find out more about some of the more "interesting" decisions on Saturday night.

"Every little decision sometimes can determine a game. I thought there were some crucial decisions in the game that probably didn't go our way," he said.

"It's such a hard game to umpire. There's so much going on.

"There's ones there that if we're doing something wrong then I want to know about it, if our technique is wrong … and the good thing about it is our players want to know."