‘It hurt me’: Simona Halep reveals her Wimbledon glory was inspired by failed defence of French Open crown

Simona Halep revealed how a painful loss at the French Open set her on the path to Wimbledon glory.

The 27-year-old produced one of the great final performances at the All England Club, committing just three unforced errors in a 6-2, 6-2 victory over Serena Williams that she described as the best match of her life.

Halep is at her most comfortable on clay and won her first Grand Slam title last summer in her third French Open final, but her defence of that crown ended with a 6-2, 6-4 loss to 17-year-old Amanda Anisimova in the quarter-finals. 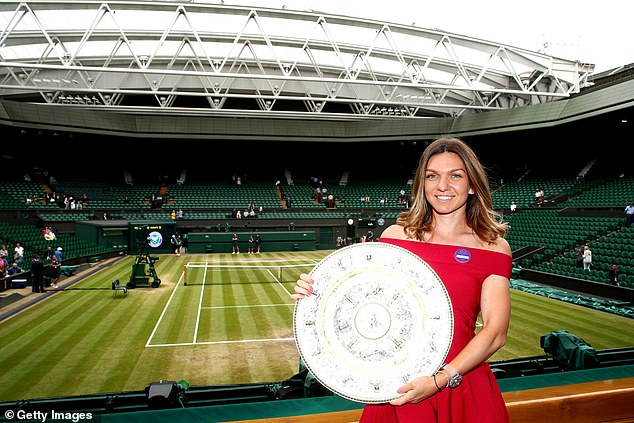 ‘The biggest adjustment is the way I played,’ said Halep. ‘In the French Open, in the quarter-finals, I played very bad. I was disappointed and I didn’t manage how to be aggressive in that match.

‘So then I started to work on this direction, I’ve been more aggressive and here I didn’t fall back at all. It hurt me that loss. I got motivated straight away to be better here.’

The Australian was Halep’s full-time coach until he announced at the end of last season that he was taking a break to spend more time with his family, but he remains a very important figure in her life.

Halep credits an on-court coaching visit from Cahill at the Miami Open in 2017 for setting her on the right path.

Cahill was so unhappy with Halep’s negative attitude that he stopped working with her for two months. They were reunited ahead of that year’s French Open, where she went on to reach her second slam final. 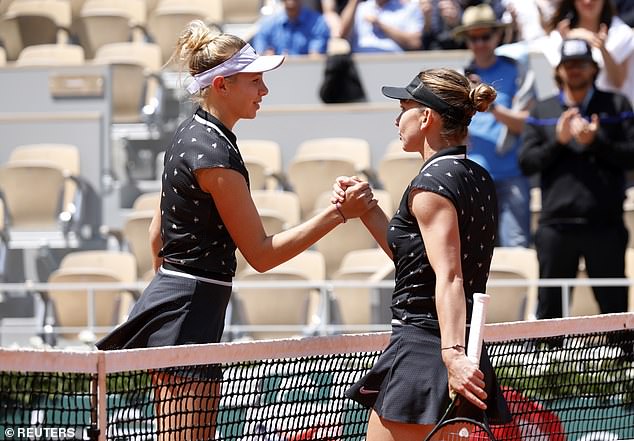 ‘He has taught me how to manage my emotions, how to be a better person on court,’ said Halep.

‘He gave me advice to trust myself as a player on court and being able to face everyone and to beat everyone. If you hear some things like this from a person that you trust and is the best coach in the world, then you are more confident and you can go on to make them happen.

‘He’s a very special person and because of him I was also able to win here. We started to work this change. As I told him, I needed time for it to sink in and to be able to feel it.’

Halep’s most treasured prize appeared not to be the trophy but the purple badge that signified she is now a member of the All England Club and can return for a visit whenever she likes.

There are no grass courts in Romania, where the French Open is the most popular slam, but Halep’s mother Tania told her when she was a child that the final she needed to reach was Wimbledon. 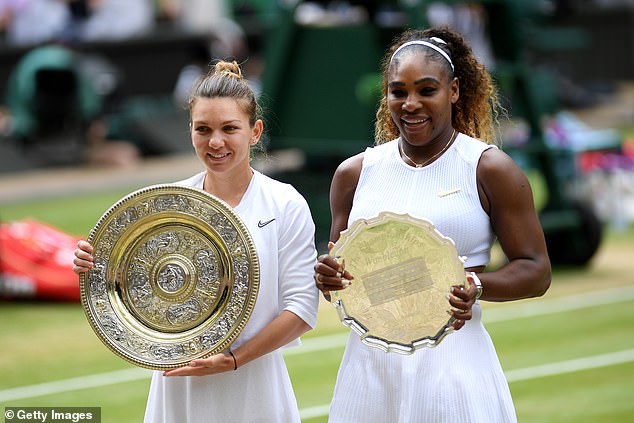 ‘She has no idea about tennis so definitely not the way of playing or stuff like that,’ said Halep when asked why SW19 had been so important to her mother.

‘Maybe the fact that you play in front of the Royal Box, the Royal family, made her feel special. That’s why she told me it’s going to be the most awesome and beautiful thing to play a final. She didn’t say to win it. Now I made it more special.’

The Duchess of Cambridge, who Halep had identified as the person she most wanted to be in the Royal Box on Saturday, and Williams’ close friend the Duchess of Sussex were among the spectators wowed by the new champion’s performance.

But it is not just the Royal presence that makes Halep so enamoured with her new club.

‘All the flowers – I love flowers,’ she said. ‘The colours, the people, they are very well dressed. The elegance of everywhere you go. The courts, the rules that you have to be white when you play. The champion’s balcony, it’s pretty awesome.

‘Everything makes this tournament very special. I never thought I would be able to win on grass. So when I did it, it makes it huge.’