Lewis Hamilton of Mercedes clinched a fifth Formula One world title with two races to spare on Sunday by finishing fourth at the Mexican Grand Prix won by Red Bull's Max Verstappen.

The Briton captured back-to-back titles and his fourth in six years with Mercedes after a maiden trophy with McLaren-Mercedes in 2008 to move joint-second with Juan Manuel Fangio on the all-time list.

Only Michael Schumacher has more titles with seven, a mark Hamilton could reach if he also triumphs in the two years remaining on his current contract through 2020.

Hamilton won nine races this season for a career tally of 71 and was on fire especially in the second half of the season when he pulled away from Ferrari rival Sebastian Vettel to clinch the title with two races to spare on the Autodromo Hermanos Rodriguez, just as he did last year.

The 33-year-old has an unassailable lead of 64 points into the concluding Brazil and Abu Dhabi races over Vettel, who has failed to add to his four world titles at Red Bull since joining Ferrari in 2015.

Hamilton said: "It's a very strange feeling right now. It wasn't won here, it was won through a lot of hard work through many races.

"I've been with Mercedes since I was 13 so to complete this – Fangio had done it with Mercedes – it's an incredible feeling and very surreal at the moment."

Vettel, meanwhile, could only pay tribute to his rival.

"Obviously not an easy day," said Vettel. "But well deserved, congrats to Lewis and his team, they did a superb job all year."

Verstappen got his second season victory and fifth overall the day after missing becoming the youngest ever pole sitter by less than three-hundredth of a second, topping the podium from Vettel and Kimi Raikkonen, who was also ahead of Hamilton in the other Ferrari.

Vettel had to win the race and Hamilton finish no better than eighth to prolong the title race but the German's hopes effectively ended in qualifying which was dominated by the Red Bulls of Daniel Ricciardo and Verstappen ahead of Hamilton and Vettel.

Ricciardo then had a disaster start from pole as Verstappen and Hamilton flew past him to lead the way from the Australian and Vettel, who refrained from taking huge risks. 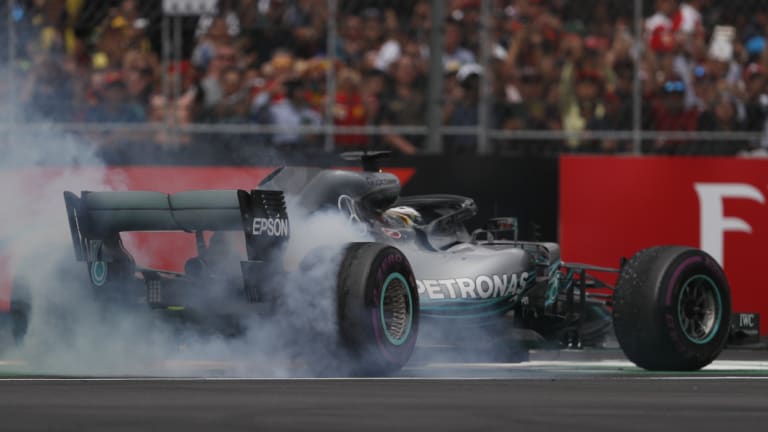 The order did not change after a round of very early pit stops as Verstappen built up a comfortable 10-second lead by lap 26 but Vettel then squeezed past Ricciardo into third in the 34th.

The Ferrari showed great pace and five laps later the German also roared past Hamilton, who was struggling with his tyres, into second.

Vettel gained ground on the leader while Ricciardo also passed Hamilton into third – and gained another place for a Red Bull one-two at the top when he stayed out while Verstappen, Vettel and Hamilton came in for a second stop.

Hamilton dropped to fifth behind Raikkonen who also just had one stop, and complained again about tyre problems by saying via team radio "something is definitely not right when I have fresh tyres and still can't match their times".

Ricciardo had to retire on lap 62 after smoke was seen coming from the back of his car – his eighth retirement for the season.

"The start was the key," Verstappen said. "The car was working brilliantly. I think we could have had a one-two and of course after Daniel you want to make sure yours doesn't retire."